A scandal that rocked the Evangelical Christian community is the subject of the upcoming Hulu documentary God Forbid: The Sex Scandal That Brought Down a Dynasty. The film focuses on the downfall of former Liberty University president Jerry Falwell Jr., who endorsed Donald Trump for the Republican nomination in the 2016 presidential election.

“As a pool attendant, I would get hit on,” says former pool-boy turned Falwell business partner Giancarlo Granda at the start of the trailer (watch below). “But if I would have known that accepting this woman’s invitation to go back to her hotel room would have led to a scandal involving the president of the largest Christian university in the world, and the president of the United States, I would have walked away and just enjoyed my private life.”

Granda is referring to his sexual relationship with Jerry’s wife, Becki, with whom he allegedly had an affair for roughly seven years. In the teaser, Granda claims that Jerry “liked to record his wife having sex with me,” noting, “[The Falwells] have a public image, but behind the scenes, they’re freaks.”

After news of the affair broke in August 2020, Jerry stepped down from his position at Liberty University, the private evangelical university in Virginia that his father co-founded. According to the Washington Post, he walked away with $10.5 million in pay without admitting to any wrongdoing. He also denied being involved with Granda, though he and his wife both confessed that she had an affair with him.

Following the release of the trailer, Becki told People that Granda’s claim of her husband filming them having sex “is not correct.” She also pointed to comments she made in a January interview with Vanity Fair, where she admitted to making sex tapes with Granda, which she says he agreed to at the time. “I had a big Canon camera. A couple of times, I put it on the dresser and Giancarlo agreed to it,” she stated. 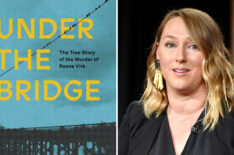 The Falwells have also claimed that Granda has attempted to blackmail them, a claim which he denies.

Adam McKay and Billy Corben serve as producers on the doc, with Corben also directing.

God Forbid: The Sex Scandal That Brought Down a Dynasty where to stream

God Forbid: The Sex Scandal That Brought Down a Dynasty