‘Blue Bloods’: A Reagan Is Shot, Plus What’s Going on With Erin & Jack? (RECAP)

[Warning: The below contains MAJOR spoilers for the Blue Bloods Season 13 premiere “Keeping the Faith.”]

Blue Bloods kicks off its 13th season by putting a Reagan in the hospital — and two of his relatives are determined to make sure the person responsible is brought to justice.

A domestic violence case that Jamie (Will Estes) is working ends up being connected to the murder of one of Erin’s (Bridget Moynahan) key witnesses; she asks Danny (Donnie Wahlberg) to investigate, then it turns out the witness was Joe’s (Will Hochman) CI. The family team-up, however, takes a horrific turn. Andre (Dario Vasquez), who is the enforcer of the defendant in Erin’s case (Juan Francisco Villa’s Arturo Muñoz) and killed the witness for him, kidnaps and murders his wife.

Jamie, who’s tired of being the quiet one and not speaking his mind about a justice system that lets men like Andre, who have been arrested, out, tracks him down. When Danny and Joe join him on scene, Andre begins shooting — and Jamie steps in the path of a bullet to save them. He takes it under his vest, and Danny drives him to the hospital himself, rather than wait for an ambulance. As expected, the family — except for Frank (Tom Selleck), out with Archbishop Kearns (Stacey Keach) without their phones to get a look at how things are going in precincts and churches because Tom Hanks is ranking higher than he is in a Hudson University poll — and officers gather at the hospital.

With the bullet lodged near his spine, the doctor reveals that even if they do remove it, there is the possibility that Jamie will be paralyzed. Do they want a priest to see him? What they want is for the doc to fix him, Henry (Len Cariou) says. The surgery is a success, though they won’t know if there’s any permanent damage to his spine until he wakes up. So while they wait to be able to see him, Danny and Joe go off to find Andre. 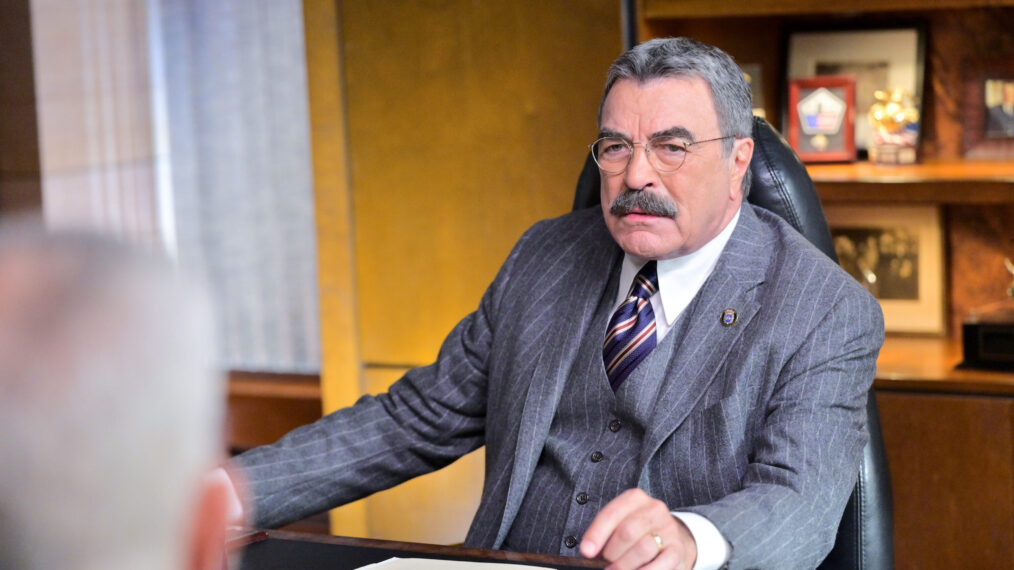 On their way, Joe asks how he learns to let go, continue being a cop and doing his job, while moving on from his dad’s death. He does the job with Joe with him, Danny explains. He’s always in his head and heart. When they do catch up to Andre, it’s Danny who has to pull Joe off the other guy (after he lets him get a few punches in). They’re doing it by the book, Danny explains, because it’s what Jamie and Joe’s dad would do.

Then, as Eddie (Vanessa Ray) sits in the waiting room, Captain McNichols (Stephanie Kurtzuba) joins her. Earlier in the episode, she had told Jamie and Eddie that one of them had to transfer precincts because while it’s not in the rulebook, she doesn’t want a married couple in the same house. Eddie had not reacted well. As she explained to Jamie, she wants to work where he does. So, when McNichols stops by the hospital and says to let her know if she needs anything, Eddie tells here she wants her to keep her and Jamie together. She needs to be in the same house as her husband so she’s the first person to know if something bad happens to him, like it did this week, Eddie explains.

Meanwhile, Erin meets Jack (Peter Hermann) for dinner in an out-of-the-way place, and he realizes she doesn’t want speculation about her date since she’s running for D.A. Speaking of that, he has someone he wants to meet. Warren Bradford admires her and her principles and wants to support her campaign — with a $3 million contribution. That exceeds contribution limits, so he’d create a PAC to help get her elected. In exchange for what, Erin asks. Frank and honest conversation, Jack says. Not everyone has an ulterior motive. But what about Erin and Jack’s personal relationship? “You and I are in limbo,” she notes. “We date, we fool around, but we’re not committed to each other.” He reminds her, “I asked you to move in. You said no. I’ve been taking your lead. You made it clear you had reservations about taking the next step. That’s on you, not me.” She admits she’s still trying to figure out what she wants the narrative of her personal life to be, so they agree to continue to have their clandestine meetings that “might be kind of hot.” And they certainly are flirty when they meet at a bar near the end of the episode, once Erin knows Jamie will be OK.

Speaking of Jamie, he might want to slide under the radar and use a back exit of the hospital, but when Erin, Danny, and Eddie take him out that way, Frank’s leading NYPD officers and doctors and nurses in saluting and applauding him.

As for the family dinner to kick off Season 13 — which includes a sweet moment where Henry says “it’s a great joy” to have Jamie there — Kearns joins the Reagans for the occasion. But who’s going to say grace? Danny and Joe encourage Kearns to do it. Joe likens it to going to a Stones tribute concert and in the middle of the show, Keith and Mick walking out on stage, and Frank calls him the black sheep of the family. Danny chimes in that the rest of them are lambs, and we love these fun sides of Joe and Danny. And, unsurprisingly, during grace, Frank’s watching Jamie.