‘NCIS’: Will Michael Weatherly Return for a Guest Spot With ‘Bull’ Ending?

It’s been six years since NCIS fans have seen Tony DiNozzo (Michael Weatherly) onscreen, but with Bull ending (the series finale will air May 26), is it possible he could return for a guest spot?

Executive producer Steven D. Binder is certainly up for it. “I absolutely would love to do something like that,” he told TV Insider while discussing the Season 19 finale. “That’s going to depend on Michael Weatherly. He and I have talked over the years about it and he was always on Bull and [since] he was on Bull, it just seemed weird and not right.”

He continued, “The last conversation I had with him was that he’s going to take some time off and rest because he went from a very difficult schedule on NCIS to headlining his own show for six years, through COVID, but I can say that I consider him a friend, so it’s not a difficult conversation to have with him. It’s just a question of whether or not it works out.”

Tony left the team at the end of Season 13, after finding out that he and Ziva David (Cote de Pablo), supposedly dead at that point, had a daughter. But Ziva would then return in the Season 16 finale, shocking Leroy Jethro Gibbs (Mark Harmon) by showing up in his basement. At the end of her four-episode return in Season 17, she left to reunite with Tony and their daughter in Paris off-screen. (They had been in contact since she faked her death.) 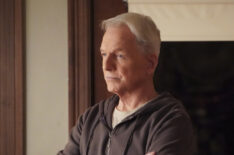 'NCIS' Boss on a Possible Gibbs Return: 'It Has to Be the Right Story'

Plus, will Mark Harmon remain in the opening credits in Season 20?

Then, later in Season 17, Tony’s father, DiNozzo Senior (Robert Wagner), told the team in a letter that he was in Paris with the family. “Apparently, by reuniting Ziva with Tony and Tali, NCIS has made him the ‘happiest pop-pop’ ever,” Dr. Jimmy Palmer (Brian Dietzen) said.

Now, we’ll just have to wait to see if Tony does return. After all, we’d love to see what he thinks of all the changes since his exit.