The iconic, epic culinary battle that is Iron Chef is back.

Chefs once again battle head-to-head in Netflix’s new series, Iron Chef: Quest for an Iron Legend, premiering on Wednesday, June 15. The trailer (below) offers a look at those battles, including secret ingredients and the “GOAT” Masaharu Morimoto, who will be a guest judge along with Francis Lam, Nancy Silverton, Justin Willman, Danny Trejo, Lorena Garcia, Loni Love, and Wolfgang Puck. Series judges are Andrew Zimmern and Nilou Motamed.

The teaser previously released also features moments that Iron Chef fans will enjoy. “So, feeling hungry old friend?” Alton Brown asks Mark Dacascos. “Hungry for battle!” Dacascos exclaims. “What a coincidence because that’s exactly what’s on the menu,” Brown tells him before passing him apple, which he bites. Watch the teaser below.

Brown returns to the kitchen stadium to host with Kristen Kish. Dacascos reprises his role of The Chairman. Based on Fuji Television Network’s format, the series is reborn with a supersized approach.

“It’s been called the toughest culinary challenge a chef will ever experience. This is where world-class cuisine meets high-octane sports. Five new trailblazing Iron Chefs will welcome brave Challenger Chefs to the reimagined Kitchen Stadium, where they’ll face off and be pushed to the limits of endurance and creativity, as they cook up extraordinary culinary creations,” Netflix teases of the eight-episode series. “The competition’s most successful Challenger will return to battle in a grand finale for the chance to be named the first ever ‘Iron Legend.'” 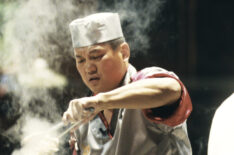 Where Are the Original Iron Chefs Now?

Iron Chef: Quest for an Iron Legend where to stream