Daniel’s (Rubén Blades) memory loss is guiding him to believe his daughter, Ofelia (Mercedes Mason), is still alive — and because he’ll do anything to find her, that’s a real liability for Team Morgan (Lennie James).

In fact, Daniel’s unreliable memory gets himself, Luciana (Danay Garcia) and Wes (Colby Hollman) into some pretty sticky situations throughout “Ofelia.” Directed by series costar Alycia Debnam-Carey, it’s an hour that pulls heavily from the show’s first three seasons; we get references to Daniel’s dark past, Nick Clark (Frank Dillane) and his relationship with Luciana, Strand (Colman Domingo) and Daniel’s history and even the Abigail. It also puts Luciana at the center of the action — something fans had long been calling for — and forces her to make a decision many might disagree with. As the episode opens, Luci helps Daniel with his memory by quizzing him with flashcards. The one he sees is of a boat, which is absolutely relevant later when he feels it’s a sign that he has to find his deceased daughter Ofelia, who he says he last saw on a boat. That’s not right, and Luci knows it. Ofelia died in Season 3 after being bitten on her side, and she and her father never spoke after the show’s second season.

But Daniel wandering off to find his child leads him, Luciana and Wes to be captured by Arno (Spenser Granese) and his people. They want information about where the weapons are that Morgan’s team is tracking down, and they’re willing to drop them into a horde of walkers inside a metal cage to get this intel. No one’s willing to talk at first, but when Wes is threatened, Daniel speaks up. He’d been noticing a boat at the edge of Arno’s people’s territory, which he believes is the Abigail. He thinks Arno has Ofelia, and he’s willing to give over the location of the weapons if Arno gives him Ofelia unharmed. Arno goes along with it, telling him he does have his daughter and that he can see her once he gives him the info, so Daniel, ignoring Luci’s warnings, does.

The trio gets thrown in a cell while Arno sends people out to verify the information is good. It isn’t — as Daniel explains, he gave them utterly wrong coordinates to get some of Arno’s people out of the way so that they can fight their way out. But first, he says, he has to find Ofelia. Luci continues to try to tell Daniel that Ofelia is dead, but he won’t believe it, and it’s not until they break out and go to the boat and find it empty that Daniel realizes his daughter truly isn’t there. 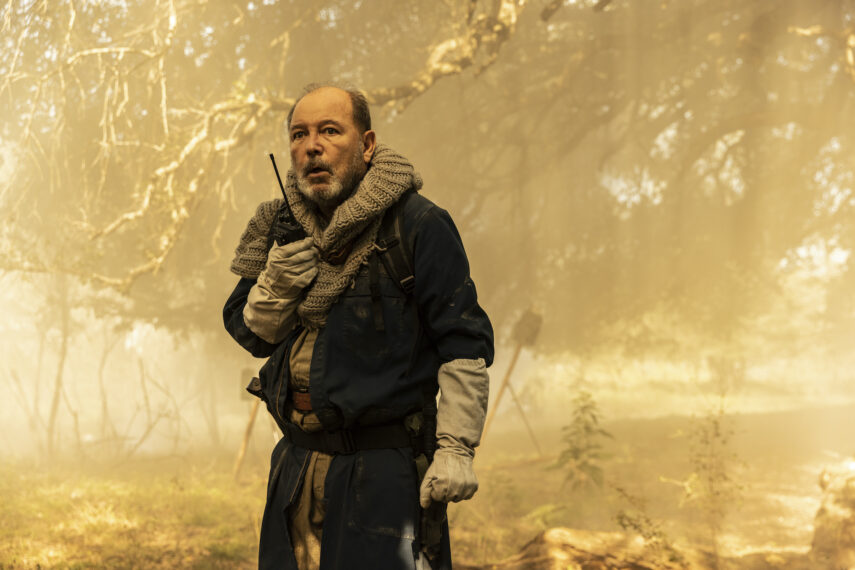 Enraged, he tracks down Arno and feeds him to the walkers in the same cage torture chamber the guy had Wes in earlier. Luci and Wes, who arrive too late to do anything about it, pull Arno up to ask him about the pit of walkers he found at the end of 709. Turns out those walkers are irradiated to the point where you can’t touch or even go near them, and Arno just wanted to get his people to the tower so they could be safe. He’s in extremely bad shape at this point — walkers ate all the skin off his legs — and he dies.

The thing about Daniel’s memory loss, as explained in this episode, is that it’s less severe when he has something to focus on. His intense focus on Ofelia helped him, but now that he knows she’s gone, he doesn’t have that focus and won’t be able to help much with the war. Luci knows how vital his information about Strand is for their side to succeed, so she makes an upsetting decision: She lies to Daniel, telling him that Arno told her Strand has Ofelia in his tower. Even though Daniel says there’ll be “nothing left” of him if he loses Ofelia again, Luci maintains that it’s true. That’s when Wes, sickened and angered by Luci’s manipulation, leaves. Luci and the rest of Arno’s people, who she managed to convince to join Morgan’s side, head back to the submarine. Morgan and his friends have the weapons, so all’s well there, and they now have a force to fight, too. Daniel knows how Strand thinks, so he’ll be a valuable resource. But it’ll remain to be seen what he’ll do when he realizes how Luci lied to him.

Across the wasteland, Wes has decided which side he’s on. He goes to Strand’s tower and picks up the phone, telling the operator that he wants to make a deal with Strand “to help save his tower.” Oh no, Wes!