‘This Is Us’: Kate & Philip’s Big Moment Arrives in ‘The Day of the Wedding’ (RECAP)

[Warning: The below contains MAJOR spoilers for Season 6, Episode 13 of This Is Us, “The Day of the Wedding.”]

This Is Us is expanding its timeline as the story takes place further into the future than most long-term plots in “The Day of the Wedding.”

While much of the episode took viewers back to the past with Rebecca (Mandy Moore) and Jack (Milo Ventimiglia), most of the action takes place in the near future at Kate (Chrissy Metz) and Philip’s (Chris Geere) wedding. Below, we’re breaking down all of the crucial moments so beware of spoilers ahead.

In the past, Rebecca gets the Big 3 — played by Isabella Rose Landau (Kate), Kaz Womack (Kevin), and Ca’Ron Jaden Coleman (Randall) —ready for school goes through her drop-off routine and grocery trip feeling bogged down by the monotony. And so, when she stops by the salon, she decides to get bold with her hair by getting it cut like Princess Diana. 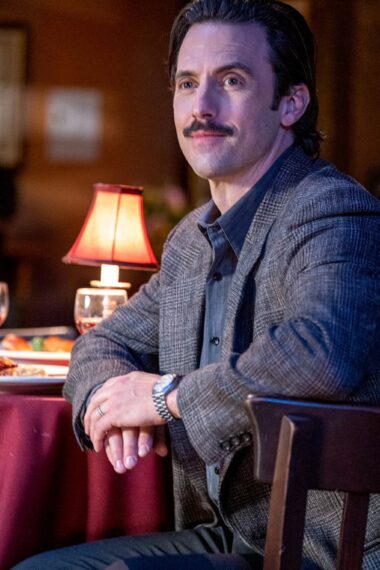 When Jack gets home from work to find Rebecca in the kitchen with the kids, he can’t help but notice she’s wearing a hat and she admits that she made an impulsive decision before unveiling her short do. While the kids tease her and claim they don’t like her hair, Jack takes a moment before responding to Rebecca’s new hairstyle.

Jack tells his kids they have to treat Rebecca with respect even if they don’t like her new haircut. Taking a moment alone together, Rebecca admits to Jack that she’s been feeling upset over the day-to-day routine, especially when she goes to the grocery store and everyone knows she’s a mom. She wants spontaneous moments, and Jack comes up with an idea. As Rebecca sits with the kids in the living room, Jack reenters the room sporting a mustache after shaving his beard.

In a moment of spontaneity, Jack invites Rebecca on a date where she tells him that she doesn’t hate their routine, but that she just needed a change. At the restaurant, Jack mentions how it would be spontaneous if Rebecca played the piano that was sitting in the corner and she does. The moment is a nice reflection of where the near-future storyline leads. After the day was introduced in the Season 5 finale, This Is Us has finally caught up to Kate and Philip’s wedding day which is filled with drama and intrigue. While the story starts out with Rebecca and Miguel (Jon Huertas) getting ready for the nuptials, it’s clear that her Alzheimer’s is progressing as she refuses to have her hair done. When Randall (Sterling K. Brown) steps into the room to check on his mom, he can’t help but notice her say that she’s looking forward to Jack arriving as well as some medications on the counter. As Randall goes to correct her, Miguel says to let it go and that it’s been a tough month for Rebecca.

Meanwhile, in the other room, Kate is hanging up from her call with Toby (Chris Sullivan) just as Philip knocks on the door to take a peek at his bride. Beth (Susan Kelechi Watson) and Madison (Caitlin Thompson) are more than ready to barricade the space, but he convinces them to let him through. Sharing a sweet moment with Kate, she voices concern over Rebecca’s ability to perform on the piano later that day and Philip tries to reassure his soon-to-be bride that everything will be fine.

In Kevin’s (Justin Hartley) room, Beth and Madison go to retrieve items for the twins and find evidence of a woman in the space. The question is, who? When Beth says it’s like a whodunnit but with sex, it starts off a hilarious investigation into Kevin’s romantic life. As they go out to observe the situation outside of the hotel rooms, Beth and Madison notice Kevin wave to the wedding singer (played by guest star Katie Lowes) and also take a peek at Sophie (Alexandra Breckenridge), but Beth waves that possibility off because Sophie’s married. When Kevin hugs Cassidy (Jennifer Morrison), it sends Beth and Madison on a tailspin of curiosity over the situation. As they continue to consider options, it’s time for a group photo which goes mostly well until Rebecca calls Kevin, Jack, and Randall goes to correct her. The information begins to upset Rebecca and Kevin has to swoop in and pretend he’s Jack to comfort her. Following the session, the Big 3 chat with Philip about the situation, and Randall wonders if their mother is capable of performing. Once she finds the key, Philip tells them, that Rebecca will lock in on the performance.

But when the little group disbands and Philip takes a moment to chat with Randall, he admits that he isn’t sure Rebecca can do it but he doesn’t want to disappoint Kate. Between the photo session and ceremony, Madison and Beth continue their investigation as they overhear Cassidy mention that she left a floral shawl in Kevin’s room. But their case isn’t exactly closed.

As for Rebecca, she has fun playing cards with Miguel, Nicky (Griffin Dunne), and Edie (Vanessa Bell Calloway). So, when Randall comes in Miguel takes the opportunity to spend some time together with his step-son and enjoy a wine tasting between wedding-related activities. Randall talks about accepting changes and how he worries about Rebecca’s health. Miguel tries ignoring the heavy topics to enjoy some free time, but Randall continues to push and mentions how he noticed Miguel’s hand tremors and a blood pressure medication. Again, Miguel won’t answer questions and the men go about their wine tasting. Back in the hotel, Rebecca talks with Nicky and Edie while watching The Golden Girls, before Kevin walks in, but he doesn’t look like Kevin to her, it looks like Jack. Knowing his mom is having an episode, Kevin plays along and goes for a walk in the garden. Kevin admits that he’s feeling lost romantically and Rebecca realizes she’s talking to her son for a moment before mentioning to “Jack” that Kevin will work things out, suggesting that there’s hope with Sophie.

Things aren’t as smooth for Randall and Miguel who have a little conflict as Randall won’t allow Miguel to lift any wine boxes. Miguel defends that he’s still capable and how he just wanted some time to feel normal, especially when the blood pressure med is causing the tremors in his hands. He tells Randall that everything is moving fast now, suggesting that Rebecca’s Alzheimer’s is more advanced than they all thought, but that there’s still clarity.

As these moments pass, it’s time for the wedding which features young Jack, Hailey, and emotional vows between Kate and Philip. When the ceremony leads into the reception, Kevin delivers his prepared speech during which Sophie can’t help but laugh. Randall also speaks and thanks Philip for bringing happiness to Kate, but things grow a bit more somber when he brings up the passage of time and how special moments like this are because time slows down for a couple of seconds for them to enjoy. Plus, find out how Kate and Phillip come together in this revealing 100th episode.

The speech is a classic Randall moment which then segues into Rebecca’s performance. At first, she barely responds when Randall announces her turn to perform, but Miguel helps her and Rebcca manages to find her keys at the piano, leading to a touching performance. Before she pulls of the tear-inducing feat, Philip tells Kate that he had planned to sing Celine Dion‘s “My Heart Will Go On” if Rebecca couldn’t get through her song.

Following a moving moment with Rebecca, the family enjoys the wedding celebration, but Kevin can’t help but notice how Beth and Madison have been paying particular attention to him all day. Before he can get any kind of answer from them, the wedding singer asks if she can talk with Kevin about something that happened the night before. Taking this as a sign to hit the dance floor, Beth joins Randall and commends him on his speech. Randall says he can see where things are heading now with a somber tone, but it’s more than just Rebecca’s story that’s continuing down a certain path, little clips tease moments between Kevin and three separate women the evening before including Sophie, the wedding singer, and Cassidy. Could any of them be the one for Kevin?

Hopefully, some answers lay ahead for fans as Season 6 nears its end on NBC.

The Day of the Wedding

« EPISODE 12
Katoby
EPISODE 14 »
The Night Before the Wedding
ADVERTISEMENT