‘The Righteous Gemstones’: Tim Baltz Breaks Down BJ’s Outrageous Baptism and What’s Next

[Warning: The below contains MAJOR spoilers for Season 2, Episode 4 of The Righteous Gemstones, “As To How They Might Destroy Him.”]

The Righteous Gemstones is a show that’s not shy about going big, but the latest episode took the holy comedy to new heights with the adult baptism of Judy Gemstone’s (Edi Patterson) usually timid husband BJ (Tim Baltz).

The occasion saw tensions flare as BJ contended with the judgment of his secular family and the pressures of living up to the evangelical in-laws he so desperately wants to be accepted by. The garish celebration, covered in shades of unforgettable pink which extended to BJ and Judy’s bright wardrobe, made way for plenty of laughs based solely on appearances. When BJ transforms into a bridezilla-like partygoer though, all hell breaks loose.

Below, Baltz opens up about the big episode for his character BJ, teases whether amends will be made between him and patriarch Eli (John Goodman) after accidentally hitting him with cake, and much more. First off, congrats on the Season 3 renewal! What was your reaction when you found out?

Tim Baltz: Well, we’re invested in the characters and the storylines, so I just got really excited, because it means that we’ll get to take them in new directions and continue the storylines that we love. When you’re an actor and you get the scripts, it’s like Christmas morning, you know? You get to discover what Danny [McBride] and all the writers have come up with. So that was the first thing I thought about. I feel pretty blessed.

BJ is the star of this episode, pretty much, and as a character who is usually on the periphery, was there added pressure to that?

No, it was really special because BJ is yearning for acceptance from these people and he’s a very earnest character. So them outright disrespecting him generates a lot of comedy. The first time I read [the episode’s script], I thought, “Uh oh, this isn’t going to be a smooth ride for BJ,” which is exciting, because it means you’re going to have a lot of tension and funny moments.

When we started doing wardrobe fittings with Sarah Trost, the brilliant costume designer for the show, I would honestly go visit the tailor who was working on the romper itself, just to see the progress. Every time I went in, there’d be some new element added like new sequins, sparkles, different velvet, and satin. So it’s just this constant building up of different elements that get you so excited, and then once you get there on the day, it’s just like falling off a log, because you have all this pageantry and you’re playing with all these brilliant people. Speaking of that romper … did you have any input on the design or did you go into the experience of wearing it blindly?

I’m always ready to go in blindly because Sarah Trost does take care of us so much. I do firmly believe that she should win an Emmy for all the costume designs on the show. It’s very easy to put our trust in Danny and how Sarah kind of takes that direction and runs with it. The scope of the Gemstones’ world in the Carolinas is so big. And you think that it’s kind of flamboyant or ostentatious or over the top, but if you’ve ever walked down King Street in Charleston, you see people trying to dress like this. Sarah’s walking a very fine line between [being] kind of absurd, but also honoring what actually exists out there. So it’s a huge gift for all of us on the show, is that we look not only good but also so perfectly in character and within the world that is being satirized that it does remove any worry from your mind.

By wearing that romper, BJ’s earnest side disappears a little, especially when his family begins making fun of him. Do you think that is a sign that Judy’s reactive behavior is influencing him or is that stemming from something else?

I think that it is a boiling over, like a lot of the kind of frustrations and relegations that he’s felt at the hands of everyone. It might be even kind of misplaced. He has to live in this world and face the kind of insults and comments from the siblings, but he puts up with it because he loves Judy. Then when his family comes to town, his sister’s comment sends him over the edge, even though he loves his family. I think it’s almost like the misplaced rage comes out because it’s been bottled up for so long. 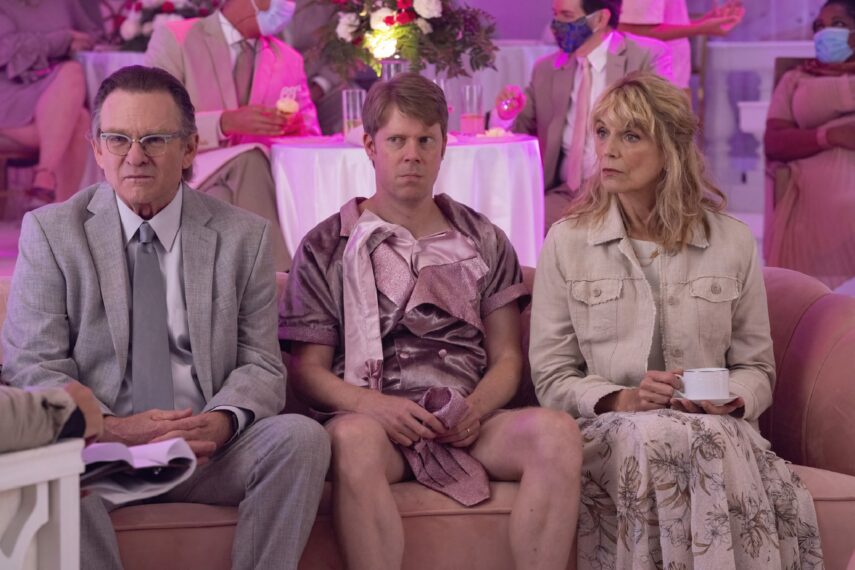 BJ’s frustrations result in some cake throwing that accidentally hits Eli. Will BJ be able to make amends with the Gemstone patriarch?

Obviously, he’s extremely apologetic. He has been nothing but respectful and looked for ways to be a non-offensive entity within the Gemstones family, and that hasn’t been rewarded at all. So I think that finally crossing the line and upsetting Eli, of all people, puts him in a place where he has to be proactive about being apologetic. Before, he’d been doing his best to never cross the line and to only be kind, and then the one time that he sticks up for himself, he crosses the line and upsets Eli. And that means that he’s going to have to go face Eli, which is probably his biggest fear in life. He knows how to deal with Judy, you know? Love conquers all, even with Judy’s moods and outbursts, but Eli is the real fear and presence in his life, so he’s going to have to face that.

BJ’s family was introduced in this episode, including his sister KJ who was actually played by your real-life fiancee Lily Sullivan. What was that experience like?

I mean, it got confusing at certain times, because you know, off-camera, Edi and I are always joking, and off-camera with Lily she makes me laugh like nobody else. So there were times where I’m like, “Okay, so wait. Who am I talking to?” Their names both end in kind of the same vowel [sound]. So there were times where I’d be like, “Hey, Edi… I’m sorry, Lily,” or, “Hey, Lily… Wait, hold on. No, no. Okay, KJ. No, wait. Who am I talking to right now?” 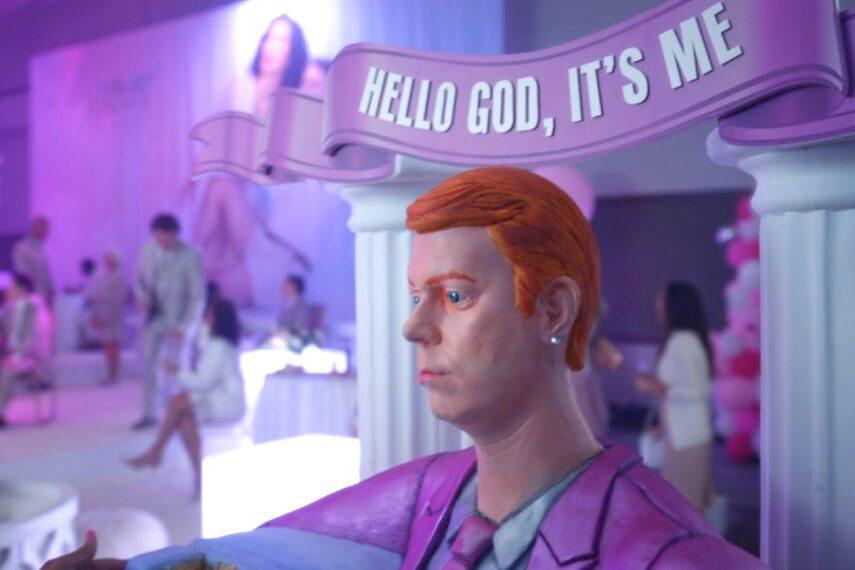 I think the scene between Judy and KJ is even more ironic knowing this behind-the-scenes detail.

Yeah. Lily and I had worked together before on this show that I wrote and created called Shrink. We always look for chances to work with each other and we write together. The funny thing is when she auditioned, they didn’t know that she was [my fiancee], because she’d only been down to Charleston once during Season 1 and maybe briefly met people.

Among one of the most impressive set pieces in this episode has to be the cake. Was it cool seeing a life-like version of your bust made out of cake?

— where they put a garbage bag around me and then they covered my head with this goo and had to let it dry, and then they cut it off me. So shout out to the FX team that did that, because it takes a lot of trust to just sit and be like, “Okay, I’ll basically be in the dark for an hour and I can’t move.”

That’s insane. And that was for the cake, they did that?

Yeah, that was for the cake head, because they needed to get the shape and size of my head, and they combined that with a 3D photoshoot. I don’t know exactly the thing, but Bruce Branit, who worked on Westworld, also worked on Gemstones, and that actually takes way less time. You stand for a few minutes and then he’d take like thousands of photographs super close to your face for a couple of minutes. 'The Righteous Gemstones': Adam Devine on His Big Fight With John Goodman

And the cakes were melting while we were filming that scene too, so it’s like this race against the clock to use them. They were touching them up like makeup artists, trying to keep them from melting. I think we had maybe eight or ten of them, and I nailed John Goodman in the face on the fifth take, so that was a big sigh of relief from everyone.

So that was your hit, the one that we saw onscreen? Did you feel bad after hitting John with the cake?

It felt both really, really good and terrible. Like, when I run away, I really was kind of running away. You know, you don’t want to hurt John, he’s a national treasure. He didn’t flinch. He’s such a pro… [When] I hit him in the glasses, there’s this gigantic gasp from the crowd because I just hit John Goodman, you know? And then when they yell cut, he breaks out into a big smile, he laughs and he goes, “Did you hear the gasp from everyone?” Like, he was excited about it. That was the coolest part.