[Warning: The below contains MAJOR spoilers for the Superman & Lois Season 2 premiere “What Lies Beneath.”]

Tyler Hoechlin and Ian Bohen are sharing the TV screen once again, and while their characters — Clark Kent/Superman and his new liaison, Lieutenant Mitch Anderson — aren’t related like they were on Teen Wolf, they’re certainly still adversarial on Superman & Lois.

Season 2 kicks off with the two in opposition — first over Superman rescuing a North Korean submarine and then returning it instead of bringing it by American soil, then when the superhero learns that Anderson has started a new program, Superman of America, and is using his crest. It’s the most recognizable symbol on the planet, Anderson argues, and “I want everyone to know we are the good guys.”

Bohen talks about his reunion with Hoechlin and teases what’s ahead with Anderson.

What’s interesting is Anderson’s line about getting the position because he knew everything about Superman, but both also acknowledge that’s not true. After all, Anderson doesn’t even know his identity. Is that going to be addressed?

Ian Bohen: Really what I am playing up is a pseudo-obsession with the goodness of the superhero character that Anderson wishes he could be. And so as like a young fan, you might collect baseball cards of your favorite players or learn everything you can about them, he wants to immerse himself in that thing. It’s not so much about knowing secrets as it is about trying to align himself with the person of Superman. So he could aspire to his greatness if you will. Now as far as whether or not it’s gonna be revealed, that is TBD. We shall see.

Does Anderson want to know his identity though? Because if you’re a fan of someone, it’s kind of like “never meet your heroes” almost.

I don’t think that mortal people know that Superman has any other identity than himself. He just is him. So there is no alternative. It’s just he’s this alien being and he’s solely individually himself. 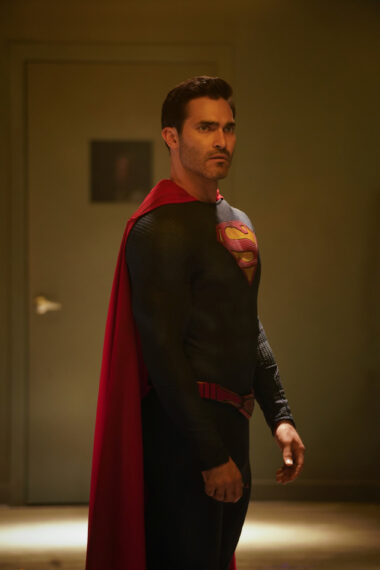 What is their dynamic like going forward, especially now that Superman knows about Anderson’s program? Strictly antagonistic?

I would say they’re butting heads more and more as we progress. Anderson comes from a power struggle side as it goes from “I worship you and I wanna help you and do the right thing with you” to “you’re not doing it the way I want you to do it” to “now I’m gonna do it.” And so that’s how the flow goes. As Superman, he is immovably consistent, so he doesn’t get ruffled. He always has the same position. You can rely on him, and he doesn’t change based on the pressure.

He has that line about how he pledged himself to the world and he’s not changing that just because now Anderson wants him to pledge to America.

Exactly. And that’s just a noble component of Superman that is wonderful. But of course here in America we would say, “Well, yeah, but we’re special. Just do it our way.” And he says, “No, I’m here for all humanity.” So we like him even more for that, even though it just really gets under Anderson’s skin.

Speaking of that dynamic, talk about working with Tyler again, because your characters’ relationship on Teen Wolf was definitely complicated too.

It is a very similar dynamic. These two characters, they’re not familial, but people will notice a lot of the same similarities when they see it. Tyler’s one of my best friends and we have just joy-filled days when we get to spend time together and work together. And we often will be standing on set and just look at each other and smile and kind of laugh and say, here we go again. We really try to take advantage of the opportunity that we have and the good fortune that we have to be able to do this together. So it’s really an outstanding joy for me.

Going back to Anderson’s project, what can we expect there from those in it and their missions?

The missions are patriotic to the core. It is to prevent the bad guys from getting an upper hand, to keep America safe above all else. And I will say that they will go to greater lengths as we progress to get to those. And then you start to have to ask, well, do the ends justify the means that you start using and then you’ll ask some questions about, at what point does a good guy become a bad guy? Where’s the line? And you’ll see it crossed from time to time.

Is he mostly getting support other than from Superman or is it kind of just his own thing?

He’s not a rogue agent at all. He’s got the full backing of the government and the Department of Defense and the generals that outrank him and whatnot. So he’s staying in his lane for the time being, but he’s going as fast as he can.

At one point in the trailer, Anderson tell Superman he’s more a liability than a hero. And we see in the premiere Superman’s being affected by something. So what can you tease about what’s going on there?

I can’t tease the details of what that force is, but I can say that lines like that are manipulative that Anderson uses to try to change people’s behavior. He’s a master manipulator and he’s used to talking and subverting minds to get what he wants, for what his goals are, which he thinks are righteous. So it’s not necessarily true. He’s just saying something to try to elicit a response. But what is surrounding that plot-wise is very interesting, and of course you’re gonna have to watch it to find out what that is.

We know General Lane is trying to retire, which I don’t imagine lasts long. Are there any interactions between him and Anderson you can preview? What’s their dynamic like?

None as of yet, but I will say having met Dylan Walsh and him being so charming and likable that I would absolutely love to share screen time with him and see what these two care do when they’re vying for the same sort of power position. Anderson’s kind of isolated because it doesn’t seem like he has any reason to interact with the Kent family. Or are we gonna see that? Because he doesn’t know that Clark is Superman.

Right. But not knowing that, he’s at the whim of whenever Superman decides to show up and then he can leave whenever he wants to. There is no secondary realm. It’s just a working relationship and it’s very frustrating for him. But again, he doesn’t know that anyone has any more exposure to Superman than he does. The audience gets it and there’s this whole other identity, but he has no idea as far as he’s concerned, he’s saving kids in wells and submarines and all kinds of things all day long.

So are we gonna see Anderson with anyone else?

Is there anything you can say about that?

[Laughs] How could I say anything? In this world, there are so many new and interesting characters and I’ll say that they were really unexpected as far as I was concerned watching the first season. I’m like, how did you come up with this and this idea and who are these people and what are they up to? So I can’t really give hints. But yes, there will be new relationships and you’ll see him in a new world outside of fatigues in the Department of Defense. So he gets to leave that building?

He does leave the building. He doesn’t sleep there. [Laughs] But we don’t know where he lives just yet.

Is anything else you can tease about Anderson this season?