‘The Resident’ EP on the Fight to Save [Spoiler], a ‘Vulnerable’ Conrad, and Kit & Bell

[Warning: The below contains MAJOR spoilers for The Resident Season 5 premiere “Da Da.”]

Doctor down! The Resident Season 5 premiere may end on a sweet note, with Dr. Conrad Hawkins (Matt Czuchry) home with baby GiGi — his wife, Nic (Emily VanCamp), is off at a spa retreat, with no indication of how she’ll be written out — but he has no idea what’s going on back at Chastain: Dr. Devon Pravesh (Manish Dayal) is in need of serious medical care after inhaling something in a deserted supply room.

In somewhat happier news, Dr. Randolph Bell (Bruce Greenwood) may have just made his feelings known to Dr. Kit Voss (Jane Leeves) by asking her out for dinner. She turns him down, tired after handling a ransomware attack as the hospital’s CEO; he says he didn’t mean anything by it, but we have a feeling he did.

TV Insider turned to co-showrunner and executive producer Andrew Chapman to find out what’s next.

How might how Conrad was affected by the father, who raised a daughter on his own, in the premiere be part of his storyline going forward as a father?

Andrew Chapman: One of the things we’re doing thematically for the whole season is talking about work-life balance in the world. We’ve all been shut in from COVID and never leaving our homes and not being able to go to the office. We’re like, what am I doing and how am I making a living? Do I want to be with my family or do I want to be at work? We really want to focus on that in the world of The Resident, and Conrad and GiGi and the family is part of that. It’s something that we’re going to dive into in a big way throughout the season.

It’s so hard to be a doctor. It requires so much concentration and time and energy, and Conrad is so heroic at it. He has a purpose in life — he’s out there to save lives — and now all of a sudden he has this kid and he’s got this family that he also has to take care of. How do you balance loving your family and saving lives? That’s going to be a story we tell over and over and over again. I feel like that’s the most emotionally involved we’ve seen him with a patient, in the premiere.

Yes. He is super, super involved with the patient and at the same time taking care of his kid. Going forward, we’ll see a more emotionally open and vulnerable Conrad Hawkins taking it seriously and really thinking about his commitments.

Will we continue to see him go and see GiGi during shifts?

Yes, absolutely. We’re having a nursery at the hospital so that he can see the kid. That storyline will be front and center. We also think that Matt Czuchry holding a baby in his arms is a serious chick magnet. Everyone feels the same way about that.

Devon’s in some serious trouble! What’s next there and assuming he survives, how does this affect him going forward?

Yes, he’s in serious trouble. Episode 2 is all about that and figuring out how to cure him and what happened to him. Episode 2 will deepen that relationship he has with Leela [Anuja Joshi], which we love. We’re all super excited about Leela. We’re excited about the actress who plays Leela, Anuja Joshi. We just think she pops off the screen. So his getting into trouble is very much a way to deepen that relationship, a way to also talk about his perspective on how to be a doctor and what kind of doctor he wants to be. Because Devon has always been really interested in social justice and how to reform Chastain to be a better hospital to serve the underserved, you’ll see that play out not just in Episode 2, but all through the season. That’s going to be really, really important to us. Speaking of Devon and Leela’s relationship, I like the moment when he pulls her aside to check on her.

Exactly. The thing that’s great about Leela and the way that Anuja plays Leela is she is learning how to be a doctor, so she’s not a fully-formed doctor yet. She’s not always 100 percent secure in her decisions and yet she is a strong, smart, independent woman. And now she’s in this relationship with a guy who is a little bit higher up the food chain than she is at the hospital. Well, that’s complicated. If you’re a strong, independent, smart woman, how does that affect your ability to move up the food chain yourself? And how does that reflect on you and how you want to be seen as a doctor and a woman? We want to play all of that and again, dive into it as a way to explore what it is to be a doctor and how to be a doctor, be a better person.

What’s going on with Kit and Bell this season? Let’s be honest, he did mean something with that dinner invite. But do they even know what’s between them?

No, they don’t. They’re trying to figure it out. They’re attracted to each other and yet they’re really great colleagues and friends and they have that fun, slightly flirty colleague relationship, and yet they’re both available and they both see each other as sexy, competent, and funny, and they love each other, in that colleague way that could go further. And by the way, Bruce Greenwood and Jane Leeves as actors just are great friends on set. They laugh, they tell jokes, they’re always together and chatting and sniping, and they’re just so much fun. When you see that, you just can’t help but write to it. You just are like, “Oh, that’s greatness. We can’t lose that.” AJ [Malcolm-Jamal Warner] has had a rough time lately — Mina [Shaunette Renée Wilson] leaving, his mom’s health, now this accident and his friend dying. How will he handle everything? Will we see a different AJ than we’re used to?

In Season 4, he was more of a teddy bear, the vulnerable loving guy with Mina, and then this horrible thing happened and Mina leaves. Then he has to deal with his mom, and that’s really hard. We have always loved the Raptor side of him: When he was first introduced, he was this guy who was a little arrogant, a little full of himself, prone to say outrageous things and snap at people. That was great, and we are interested in getting back to that a little bit. At the same time, he still is a son who wants to take care of his mom, and she will show up again in episodes. That will cause all kinds of problems for him and conundrums of how to behave and what to do. Expect to see a little bit more of the Raptor that we saw early on.

Kit’s doing well as CEO, and in the premiere, she proved to everyone she can handle a crisis. What other challenges are coming her way?

The story we want to tell for Season 5 is very much a story of changing Chastain into a hospital that serves everybody and serves everybody with excellence. The way that she kicked ass in Episode 1, expect to see her kick ass continuing into the future. We love the idea that she’s just full of badassery and she can handle whatever’s thrown at her. That’s so much fun to watch. Expect that to continue and expect her ride as CEO to be bumpy, but for her to conquer. 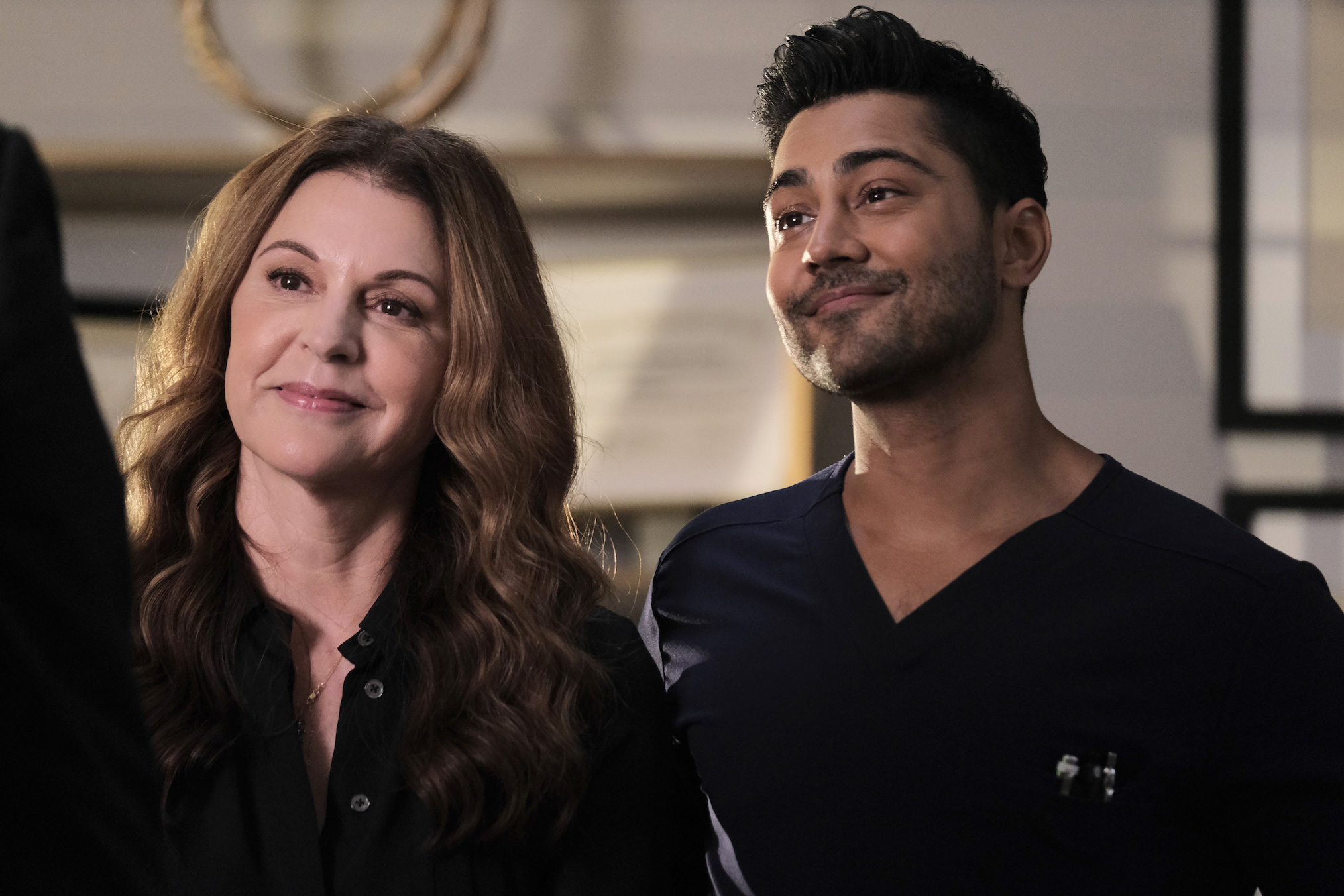 Cain did take that job offer. I know scheduling has to be taken into account with Morris Chestnut on Our Kind of People, but is there anything you can say about how much we might see him this season?

That is under discussion. In fact, just before I got on the phone with you, he called me to have a conversation about that. We love him. We love Morris, he’s the nicest guy in the world. And also we love Cain. His character is a villain you can redeem and such a brilliant surgeon. The thing I will say is you will see Cain again. If it’s not this season, it’ll be next season. We’re trying to work it out. He’s a great addition to the show, and we don’t want to lose him forever.

Are there any new members of the hospital staff coming in?

We’re gonna bring in a new doctor right around our midwinter finale. I’m not going to give away too much because we’re still writing who that doctor is, but it’ll be an explosive character. It’ll be a character that makes you step back and go, whoa, how are people going to get along with this person? 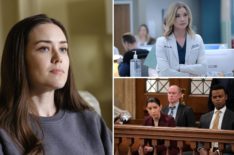 Lots of really good interpersonal stuff, some enormous surprises, some really intense emotional episodes coming right around the corner. It gets more intense in [Episode] 2, and over-the-top intense in 3. At the end of Episode 5, you will want to keep watching up until 6, because the show is going to go in a 90-degree right-hand turn, and the audience is going to love it. The audience is going to be, “Holy s**t, really? OK,” and they’ll be along for the ride. I think they’re going to really dig it.

Can you say if that involves multiple characters or is it a whole hospital thing?

It’s the whole hospital, multiple characters, but it’s also an unexpected right-hand turn for the show.