Animation Domination: Get a First Look at ‘The Simpsons,’ ‘Family Guy’ & More (PHOTOS)

Fox is gearing up for the return of its Animation Domination lineup and we have your exclusive first look at the upcoming seasons with some super cool and stylized key art.

Premiering Sunday, September 26, the four-show lineup features The Simpsons, The Great North, Bob’s Burgers, and Family Guy. While some are old and others new, the first looks share a comedic tone with various scenes featuring fan-favorite characters. In the image for The Simpsons and its landmark 33rd season, Homer (Dan Castellaneta), Marge (Julie Kavner), Bart (Nancy Cartwright), Lisa (Yeardley Smith), and Maggie get active in Springfield with rollerskates and skateboards.

Meanwhile, the first look at Family Guy‘s 20th season features a NSFW Peter Griffin (Seth MacFarlane) enjoying a beach day with wife Lois (Alex Borstein) and the rest of the family. Although, we’re willing to bet that Meg (Mila Kunis) isn’t having the most fun buried in the sand. 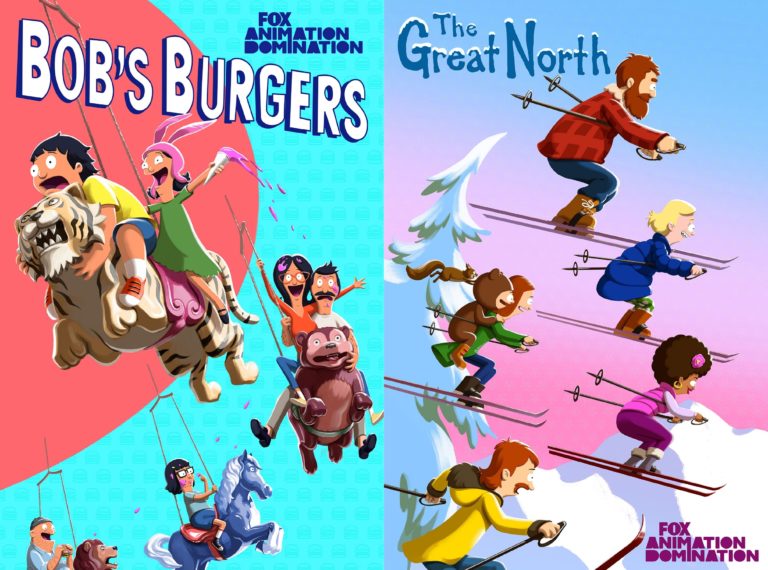 As for the Belchers who are celebrating Bob’s Burgers‘ 12th season, they’re having a swinging good time on a carnival ride. And then there’s the newest addition to the Animation Domination lineup, The Great North, which is returning with its second season.

In the image featuring the Tobin family, Honeybee (Dulcé Sloan), Wolf (Will Forte), Beef (Nick Offerman), Judy (Jenny Slate), Ham (Paul Rust), and Moon (Aparna Nancherla) delight in some group skiing. This first look key art is just a taste of what viewers can expect from the lineup which returns with new episodes on September 26. Don’t miss it; catch Animation Domination when it kicks off that day at 8/7c on Fox.

Plus, an expanded 'Treehouse of Horror' episode, guest stars like Timothy Olyphant, and more revealed during [email protected] panel.