Which ‘Station 19’ Couples Are Still Sizzling in Season 5?

Ten months have elapsed since Station 19 captain Maya Bishop (Danielle Savre) was publicly fired during her wedding to ob-gyn Carina DeLuca (Stefania Spampinato). In addition to that professional drama, the event stirred up much romantic drama.

Station 19 executive producer Kiley Donovan—who notes that there have been “big shake-ups at 19, and the fire family is not quite intact”—reveals which love matches still sizzle and which flamed out.

Despite Maya’s shift in career status—she’s still part of the Seattle FD, but where?—in Season 5, “their marriage is solid, an A+,” says Donovan.

The firefighters’ tempestuous union shattered when Andy (Jaina Lee Ortiz) blamed her hubby (Boris Kodjoe) for betraying Maya in order to promote himself as new captain. A reconciliation looks doubtful.

The former lovers (Jay Hayden and Lachlan Buchanan) smooched at the nuptials. Now their relationship has been rekindled, says Donovan, and it’s “more passionate than ever.” 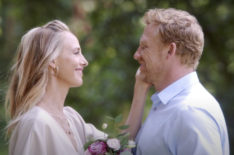 As he prepared to tell Vic (Barrett Doss) he loved her, Dean (Okieriete Onaodowan) caught her snogging Theo (Carlos Miranda). Vic and Theo “are as hot and heavy as they were in the finale,” says the producer. Where do Dean and those three little words fit into this scenario?

Jack (Grey Damon) lost his adopted family when Inara (Colleen Foy) left after realizing he didn’t truly love her. Still, Donovan says, “he stands a good chance at finding someone right for him this season.”