A Melrose Place reunion is taking place in an upcoming episode of Fox’s reimagined version of Fantasy Island, but could a full-fledged reboot of the classic ’90s series be in the works?

According to Josie Bissett, who played Jane Mancini in the Beverly Hills, 90210 spinoff, “there are conversations with Fox going on” for a Melrose revival. Bissett previously reprised her role as Jane in two episodes The CW’s short-lived Melrose sequel series in 2009 but tells the Seattle Times: “This is gonna be different because it’s the original cast. Melrose is a tough show to reboot unless it’s with the original people.”

She also notes that none of the show’s original writers are involved in the reboot attempt, but she has her own ideas of what the series should entail. “I think it would be great if we all have our kids and the apple doesn’t fall far from the tree, so we’ll go through some things with our kids that we went through on the show ourselves,” she explains.

Bissett will reunite with her former Melrose co-stars Laura Leighton (Sydney Andrews) and Daphne Zuniga (Jo Reynolds) for Fox’s Fantasy Island. The trio is set to play a group of friends celebrating their 50th birthdays on the island, and the show’s executive producer Sarah Fain has promised some Melrose Easter eggs.

Earlier this month, Bissett talked to TV Insider about her time on Melrose, stating, “Part of me wishes that I could redo it and have some of those days back and just be more present. It was such a fantastic show and such a great, smart group of people that I wish I could have done it like a little bit older. I would have appreciated it a bit more, had more fun. I was just all work.”

The stars of the show also had a virtual reunion last year. 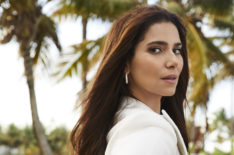