‘The Beast Must Die’ Gets Second Season Ahead of AMC Premiere

Eagerly anticipated revenge thriller The Beast Must Die doesn’t premiere in the U.S. until next month, but it has already been picked up for a second season.

The first two episodes of the Jared Harris (Chernobyl) and Cush Jumbo (The Good Fight) drama set new viewing records for a series premiere, according to BritBox UK which has been streaming the six-episode show across the pond.

Following this success, BritBox has announced that a second season, titled A Sword in my Bones, is in development and will be based on an original story created by the show’s screenwriter Gaby Chiappe (Vera).

Produced by New Regency Television and Ridley Scott’s Scott Free, The Beast Must Die is based on the 1938 novel of the same name by Nicholas Blake (the pseudonym of poet Cecil Day-Lewis). It follows a mother who sets out to avenge her young son’s death, infiltrating the family of the man she believes killed her son while a detective tries to unpick the web of tragedy and steer a course to justice. Jumbo stars as Frances Cairnes, the mother determined to get justice for her son’s death by any means necessary. Harris plays the cruel and pompous George Rattery, the man suspected of being responsible for the hit and run that killed the young boy. The Serpent‘s Billy Howle portrays Nigel Strangeways, the detective caught between proving George’s guilt while also stopping Frances’ plans for revenge. Howle is expected to reprise his role in the second season. 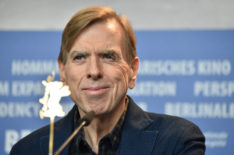 “I am thrilled by the reception to The Beast Must Die,” said Howle. “A lot of hard work by all the cast and crew went into making the first original drama for BritBox, during a pandemic, and it seems to have paid off. I would relish the opportunity to take on the role of Strangeways again and am really excited by the prospect of this next chapter.”

BritBox UK MD Will Harrison added: “We are all immensely proud of our first original, scripted drama and the reception it has received from critics and subscribers alike. We are working closely with our partners at Scott Free and New Regency to explore what may lie in store for Detective Strangeways.”