The Duttons aren’t your average billionaire family. Firstly, they have a dark family history no one likes to talk about — even decades later. And secondly, each family member seems to have ulterior motives, so who can really be trusted? 'I really enjoy playing someone who's imperfect,' the actress admits.

The freshman season — which is midway through — follows John Dutton (Kevin Costner), who controls and owns the largest contiguous cattle ranch in the United States, and his three living kids: Jamie (Wes Bentley), Beth (Kelly Reilly), and Kayce (Luke Grimes) — RIP Lee (Dave Annable), who was killed on the season premiere — as they face threats and conflicts from land developers, a nearby Indian Reservation, and the Yellowstone national park.

John will protect his land and legacy at all costs, which causes friction (to say the least) in the community and pits his family against everyone else.

The drama series created by Taylor Sheridan pulls back the curtain on the romanticized, rugged American West, juxtaposing the hardships and injustices the Native American people endure with the vast wealth and power held by the elite. 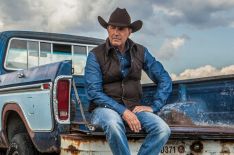 The actor makes his debut in the Paramount Network series on June 20.

And at only three episodes into the run, it became the second-most-watched TV series on ad-supported cable to air in 2018 (only behind The Walking Dead).

In the gallery above, we offer up five reasons why the just-renewed show should be on your must-see list this summer. Check them out and tell us in the comments if you agree!

In the meantime, check out an exclusive look at the midseason trailer below: