How You Already Know the Cast of ‘The Big Leap’

It’s lucky for us that Fox ordered its pilot The Big Leap to series, because the cast of the ballet dramedy is “on pointe.”

Fox describes the show as a “big-hearted, rowdy dramedy” featuring down-on-their-luck characters trying to mount a production of Swan Lake as they participate in a potentially disastrous reality dance show.

“What this group of underdogs lack in dance training, they make up for with their edge, wit, and desire to reimagine an iconic story to fit their own mold,” Fox’s logline teases. 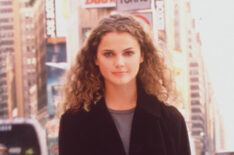 'Felicity' Turns 20: Where Are the Cast Members Now? (PHOTOS)

The network adds that The Big Leap, which was inspired by the British reality series Big Ballet, is “an innovative show-within-a-show that takes viewers on a journey of self-acceptance, body-positivity and empowerment at any age” and “a modern tale about second chances and chasing your dreams and taking back what’s yours.”

The Big Leap has long been in the works: ABC picked up a version of the idea for the 2015–16 development season, and then Fox pursued the current incarnation for the 2020–21 season before the pandemic paused production on the pilot, according to Deadline.

Now the show is finally making it to airwaves for the 2021–22 season, and except for newcomer Simone Recasner (Gabby Lewis), the cast boasts actors TV fans will find familiar. Here are their bona fides…