Real name: Emily
Signature Move: You know the saying “built like a brick s***house”? The Samoan-American wrestler (and nationally ranked shot putter) used her solid 350lbs to knock out competitors with a clothesline (extending out one arm so your attacking opponent catches it in the neck or chest, falling backwards to the ground) or avalanche (smashing the other fighter into the corner of the ring).

Real name: Dee Boher
Signature Move: Mt. Fiji’s most frequent opponent nearly matched her in size and definitely towered over her in vocal power. When Matilda wasn’t screaming, she was flooring other girls with a backbreaker (dropping the other fighter onto your knee in a manner that bends their spine) or a big splash (belly flopping onto a prone opponent).

Real name: Lisa Moretti
Signature Move: When it was time to finish off her opponent, Tina (who went on to wrestle in the WWE under the name Ivory) hit them with the Moretti driver. Also called a “Samoan driver,” this move involves slinging the other fighter over your shoulder and then flipping her over while at the same time dropping onto your rear—so when the lucky girl lands, her head is between your legs.

Real Name: Cindy Maranne
Signature Move: One of the original GLOW ladies, Americana was better known for the beatings she took than those she dished out. Most notably: Fighters Royal Hawaiian and Spanish Red once dragged Americana to one of the ring’s posts, spread her legs around it, and rammed her crotch into it.

Real Name: Lori Palmer
Signature Move: Picture it: The icy blonde hair, hardass demeanor and anti-American sentiment of Brigitte Nielsen in Rocky IV, but in a Communist-red unitard. She was known for low blows, unbreakable confidence and taking everything very seriously.

Signature Move: There were easy ways to make your opponent dizzy, but none were as spectacular (or disorientating) as Babe’s farmer’s roll. The moved involved wrapping your legs around your partner while you are both on the floor and then rolling, simultaneously spinning them and banging them on the ring floor.

Real Name: Nancy Daley
Signature Move: If Lizzie Borden and Miss Havisham had a crazy baby, it would be Dementia. The crazy-eyed killa terrorized other fighters by simply swinging a toy axe.

Real Name: Lynne Braxton
Signature Move: Big Bad Mamma used her “voodoo powers” to destabilize her opponents—and when didn’t work, she’d crush them with a big splash (basically, a belly flop) from the corner of the ring.

Real Name: Dawn Maestas
Signature Move: Unlike her namesake, Godiva couldn’t go around completely nude (she wore a flesh colored leotard with sequins covering her special bits). But she did ride in on a horse and have long flowing locks, which could be used to strangle other fighters. Oh, and her British accent? Completely fake.

Signature Move: One of GLOW’s most famous Bad Girls (who’d fight the so-called Good Girls), Hollywood’s gimmick was being a stone cold criminal. If a GLOW girl could bring a wallet into the ring, she’d be the one to steal it.

GLOW is gearing up for its third season on Netflix, and this time around, the ladies are heading to Las Vegas!

As the series continues to chronicle the story of the eponymous 1980s wrestling series, we're looking back at some of the real-life original wrestling league's top grapplers in the gallery above. And if you don't agree with our choices, well, prepare for a body slam! 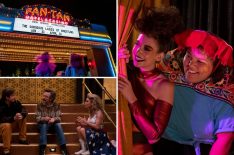