Bomer follows the footsteps of Jessica Biel and Carrie Coon as Bill Pullman’s co-lead in the third season of this USA anthology, playing an expectant father affected by a car accident.

The Grey’s producers bumped the three actors up to series regular status for Season 16 in May, so fans can expect a lot more of Drs. Levi Schmitt, Atticus Lincoln, and Tom Koracick.

The This Is Us breakout announced in a social media video in April that he is joining the cast of The Marvelous Mrs. Maisel‘s third season, though he didn’t elaborate on his role.

The She’s All That star will play Max, a “quirky, kind-hearted, candid woman” who catches the eye of Matthew Gray Gubler’s Reid in Criminal Minds‘ 15th and final season, per TVLine.

Melanie Liburd, This Is Us

Liburd, who joined the NBC drama as a series regular last year, will not return to the show for Season 4. Her character, Zoe, split with Kevin in the Season 3 finale.

After being indicted for her alleged involvement in the nationwide college admissions scheme, Loughlin is not expected to return for the Netflix spinoff’s fifth and final season.

Jennifer Morrison, This Is Us

The House and Once Upon a Time vet will appear in a “substantial” recurring role in This Is Us Season 4, though further details are still under wraps.

Murray is leaving the CW drama after three seasons now that the network has picked up the spinoff show Katy Keene, which features a future version of her character, Josie.

Rickards told Instagram followers she was leaving Arrow in March. And in the CW drama’s Season 7 finale, her character, Felicity, disappeared for places unknown with The Monitor.

After debuting his Det. Antonio Dawson on Chicago Fire in 2012 and then starring in Chicago Justice and Chicago P.D., Seda announced his exit from the One Chicago universe in April.

Empire viewers have seen the last of Smollett’s Jamal Lyons. In the wake of his legal drama, the actor will not be returning for the Fox drama’s sixth and final season.

Winchester, who brought his ADA Peter Stone to SVU in Season 19 after the cancellation of Chicago Justice, will not return for the long-running procedural’s 21st season, as he tweeted in March.

The television biz is a constantly revolving door, with actors leaving long-running shows only to link up with others.

As the 2018–2019 primetime TV season wrapped up and network execs shifted their attention to the 2019–2020 season, we saw a barrage of headlines about big-name exits and entrances on our favorite shows like Empire, Criminal Minds, This Is Us, Law & Order: SVU and more.

Click through the gallery above to see some of the biggest of those stories, just so you're not surprised come September. 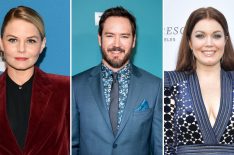 Cobie Smulders, Michael Emerson, Scott Wolf, and more are coming to your TV screens in Fall 2019.