And with that, Arrow has finished filming.

The cast wrapped its final episode Wednesday, and they and the show’s producers and stars took to social media to pay tribute to the one that started it all for the Arrowverse on The CW.

“Words can’t even begin to express what Arrow has meant to me. Best 8 years of my life,” Stephen Amell wrote on Twitter. “The cast and crew of the show have become my family. I’m going to miss them. I’m wrapped.” 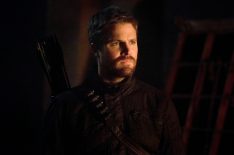 In honor of the occasion and her last trip to Vancouver (where the series is filmed), showrunner Beth Schwartz reflected on her first time on set for Season 1 Episode 15. “I was the first writer to be on set,” she wrote on Twitter. “I didn’t realize then that going to Vancouver would become the norm over the next 8 years. That I would meet amazing people and work with incredible talent. I will miss my trips to Vancouver but will be forever grateful for this crazy and wonderful ride.”

Click through the gallery above for the photos and messages the cast and producers shared on social media as they wrapped filming. The series finale will air Tuesday, January 28, 2020.