Welcome to the Grishaverse, Netflix’s latest answer to Game of Thrones — and a worthy answer, it is.

Whether you’ve hungrily devoured every word of Leigh Bardugo’s YA novels or you’re starting off as a total newcomer to Alina’s (Jessie Mei Li) world, her friends and her enemies, the series premiere of Shadow and Bone is accessible to all (if a little confusing, perhaps, at times). The episode is divided into two major storylines: Alina’s, and a young criminal mastermind named Kaz (Freddy Carter) and his team’s. They connect in a spectacular way at the end of the episode, but most of “A Searing Burst of Light” is spent on introducing them, separately and thoroughly.

Alina, we learn, is a cartographer in the First Army in the Kingdom of Ravka. She joined with her friend Mal (Archie Renaux), with whom she grew up in an orphanage after their parents were killed trying to cross the mysterious, deadly Fold. They’re at war with the Fjerdans and the Shu, who border them to the North and South, which leaves the Fold as the only means of escape for any Ravkan who wants to get out of their homeland. (In a marked change from the source material, Alina is half Shu, which makes her the target of racist comments from other members of the army.) The Fold, unfortunately, is a wasteland brimming with murderous monsters, and as she and Mal wind up fighting for survival, she makes a discovery about herself that will change the course of her life. Alina and Mal are thrilled when their companies are merged because it means they can spend more time together — there are a couple of classic YA “these two have been best friends for years, but they have crushes on each other” beats — but in a cruel twist of fate, Mal is assigned a place on a mission through the Fold to retrieve supplies from Ketterdam. Both Mal and Alina know this likely means certain death, but he swears to return to her anyway. That promise isn’t good enough for Alina. Desperate for a way to accompany her friend, she burns several maps from the opposite side of the Fold, and when her commanding officer asks who did it, she says she doesn’t know — but she volunteers to go on the mission and re-draw them. The plan works: She’s allowed to travel through the empty void of death. But it’s a bummer for the rest of her company of cartographers, who are assigned to go as well.

As with any fantasy work, there is magic (or as those who practice it call it, science) in the form of the Second Army, which is comprised of a group of Ravkans called Grisha. The Grisha are divided into three sub-groups, and their powers range from “Heartrending” (healing/controlling the body) to controlling the elements.

So, the First Army members and Mal, along with a few Grisha from the Second Army and Alina and her cartographers, all get on the boat. (It’s a brand-new boat, supposedly more likely to see success than the numerous doomed voyages that preceded it). Everyone’s trying to keep their spirits up, but it seems a bad sign that the leader of the Second Army, General Kirigan (Ben Barnes), doesn’t accompany them. Plus, she addresses Alina and Mal's (Archie Renaux) 'wholesome' relationship.

A Searing Burst of Light

Obviously, things go haywire. The one light they’re keeping on the boat goes out, and one soldier has the bright idea to light a different lantern, which draws in dragon-like monsters with huge teeth. They attack, killing most of the soldiers on board; one of Alina’s cartographer friends named Alexei jumps overboard, and Mal ends up in a creature’s claws. With some quick shooting, Alina saves him, but it appears his wounds might be mortal anyway. “I’ll meet you in the meadow,” Mal tells her as she leans over him and holds his hand.

That’s where things get interesting. One of the monsters picks up Alina, and a searing burst of light emits from her and resounds through the Fold. Meanwhile, Alexei makes his way to Ketterdam and collapses on the shore, exhausted. In Ketterdam, we’re introduced to gambling sharpshooter Jesper (Kit Young) as he calls a player out for his counterfeit coins by shooting a hole through one of them (it’s a pretty cool scene); criminal mastermind Kaz Brekker as he turns down a job to track down a painting we later see sitting in his living room; and “wraith” Inej Ghafa (Amita Suman), who can follow people and sneak into places without being heard or seen. They’re living in The Barrel, a seaport town teeming with brothels, clubs, and cutthroat gangs. It’s a wretched hive of scum and villainy for sure, but Kaz and his pals navigate it well.

Inej tells Kaz about a job from a wealthy merchant named Dreesen, who is looking for a crew to cross through the Fold and bring back something from the other side. The reward? A million kruge (that’s a lot of money). At first, Kaz is unimpressed: “Of course certain death pays a million.” Inej tells him Dreesen is taking meetings about the job starting at midnight that night, and she watched as the merchant took someone mysterious back to his home. They hear tell that Dreesen is looking for a Heartrender, and they spring to action to get one before Pekka Rollins, a rival, ruthless crime lord in the Barrel who we see murder a club owner in pursuit of a Heartrender.

Kaz and his group succeed where Rollins failed, and they deliver Dreesen a Heartrender before anyone else in Ketterdam. Turns out — surprise! — the Alina storyline was slightly behind Kaz’s, and the prisoner Dreesen has taken is none other than Alexei. Dreesen uses the Heartrender to sway Alexei into talking about what he saw when the ship was attacked, and he says a Grisha Sun Summoner destroyed the monsters and emitted the light. A Sun Summoner is rumored to be capable of destroying the Fold, and currently, Alina is the only one known to be in existence. That makes her very, very valuable: valuable enough to be the “something” Dreesen wants from the other side of the Fold. He kills Alexei after he delivers that bit of information, then he tells Kaz, Inej, and Jesper that they have the job — “if you can prove you have a way through the Fold and back.” If they don’t, he says he’s giving the job to Pekka Rollins. Meanwhile, Alina and Mal have washed ashore back at their camp, on their ruined ship. 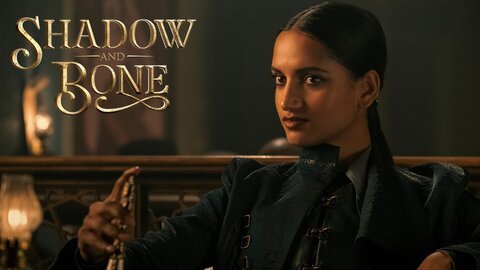 A Searing Burst of Light