‘Law & Order: SVU’: How Did the Stabler-Benson Reunion Go? Plus, Who Died? (RECAP)

“You were the most, single most important person in my life, and you just disappeared,” Captain Olivia Benson (Mariska Hargitay) says to her former partner, Detective Elliot Stabler (Christopher Meloni), after reuniting with him a decade after he quit the NYPD. Does the event live up to the hype? Oh, yes, it does. 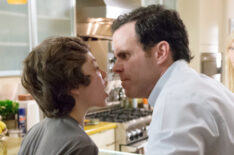 'Shameless' star Ethan Cutkosky will be back as Henry Mesner in Season 22.

Elliot’s return to his old show has a lot to cover: reintroduce him to fans, reunite him and Olivia and cover everything that entails, and set up his spinoff. How does it do that? Let’s dive in.

Yes, It’s Really Been 10 Years Since They Talked

When we first see Olivia, she gets to the scene of a car bomb, only to see it’s Elliot’s wife Kathy (Isabel Gillies) being loaded into the ambulance. That’s when Elliot calls out to her. “They tried to kill her,” he says.

Kathy’s rushed to surgery (and Olivia flashes back to the day Eli was born, Season 9’s “Paternity”), and Sergeant Fin Tutuola (Ice-T) updates Olivia on what they know: The bomb went off when Kathy went to get in the rental car. (Elliot stepped away for a call when he joins them.) It turns out the Stablers have been living in Italy with Elliot working as the international liaison in Rome for the NYPD. He’s in town for a task force meeting, and when they heard about Olivia getting an award, he and Kathy decided to make a trip of it. At the precinct, Olivia learns that protestors were targeting the police nearby and there was an NYPD placard in the Stabler’s car. A guy who threw a Molotov cocktail into an empty NYPD van nearby is arrested, and as soon as Elliot hears he’s their prime suspect, he insists on going in to interrogate him. “I give you my word I’ll behave,” he tells Olivia.

He’s lying, of course, especially once the suspect begins taunting him about his wife after hearing the arresting officers mention her (“What are you doing here? Shouldn’t you be with her?” he asks — and doesn’t that remind you of Elliot’s lack of work-life balance years ago?). Olivia has to warn her former partner, and also get between him and the suspect and eventually push him out.

When Kathy wakes, she unfortunately can’t tell them anything useful. But “it’s like the old days,” she says of Elliot and Olivia together again, in her hospital room. “The two of you together. Always so in sync.” And even she’s surprised: “You really didn’t talk for 10 years?” The Moment Everyone’s Been Waiting For

Olivia and Elliot do finally talk in the hospital waiting room and it’s just a beginning but it’s exactly what we need to see (and he deserves the riot act she reads him). “Liv, I’m sorry,” he says. “You’re sorry for leaving? Or are you sorry for walking, for not giving me the courtesy of not telling me?” she asks.

“Both. I think I thought if I talked to you about how—” he begins.

“You walked away? Because that’s what you did. I had to find out from Cragen,” she reminds him. “You were the most, single most important person in my life, and you just disappeared.”

“I was afraid,” he admits. “If I heard your voice, I wouldn’t have been able to leave.” Her phone ringing interrupts their conversation (and we’ve started feeling bad for both of them), and she’s obviously thrown as she has to leave to see Deputy Chief Christian Garland (Demore Barnes); she’s a bit lost looking for the exit. Later at a bar, Elliot tells Fin a bit more about what he’s doing in New York: Testifying at a trial for “minor players” charged with extortion and money laundering in Puglia. With the bomb signature more international than domestic, it’s entirely possible it’s related. Fin also fills Elliot in on Olivia since he left: She moved on, has a son, and had a couple of relationships (one solid).

But when they join Olivia back the hospital, Kathy codes…

Kathy’s hanging on. As the squad begins looking into Elliot’s cases, Detective Amanda Rollins (Kelli Giddish) takes a moment to check on Olivia. Were she and Kathy close? Not at first, Olivia admits, but that changed. Rollins also brings up the former partners’ “complicated relationship,” as Nick Amaro (Danny Pino) — the callbacks continue! — told her. “Back then, nobody looked out for me the way he did,” Olivia shares.

A familial DNA match on the cell phone trigger leads them to the person who planted the bomb, Sacha. But he’s just a wannabe and didn’t realize he was bombing a cop’s car, ADA Sonny Carisi (Peter Scanavino) realizes, planning to arraign him and get him to cough up who hired him by offering a deal. The only problem? Just before that plan works, whoever hired Sacha calls in the big guns to take over as his attorney.

And that’s when Olivia hears from Elliot: Kathy died. At the hospital, he falls into her arms, crying.

Kathy’s spleen ruptured, Elliot explains, and “I didn’t get to say goodbye.” Olivia offers to call his kids for him, but he wants her to focus on making sure the person responsible goes down for murder.

When Fin and Officer Katriona “Kat” Azar Tamin (Jamie Gray Hyder) go to Rikers to get Sacha, however, they find him dead in his cell, set up to look like an overdose. And as SVU tries to continue to investigate, Garland takes them off the case. Intelligence is taking over, he tells Olivia.

As the episode ends (and we head into Organized Crime), Olivia watches Elliot, his daughter Kathleen (Allison Siko), and his son Dickie (Jeffrey Scaperrotta) grieve for Kathy in a chapel…before he heads to the courthouse to threaten the men he’s testifying against.

Welcome back to the NYPD (in New Y0rk), Elliot Stabler. Oh, how we missed you.

Return of the Prodigal Son