Selena: The Series puts Selena Quintanilla (Christian Serratos) back in the spotlight 25 years after her tragic death. But the show also widens the lens to encompass her family.

And it must be said: Noemi Gonzalez, who plays Selena’s sister, Suzette, steals the show as Selena y Los Dinos’ drummer. TV Insider talks with Gonzalez about how she got involved with the project, learning to drum for the role, and much more.

Jesse Posey on Bringing 'Selena: The Series' Version of Chris Pérez to Life

The actor left fans with quite a cliffhanger in the Part 1 finale.

How did you become involved with the show?

Noemi Gonzalez: Well, anything Selena draws me in. And there was all this buzz in Hollywood, especially within the Latin X acting community, and something in me knew I was going to go through that casting door. And sure enough, my manager calls me and tells me, “I think you’re Suzette.” And I said, “Let’s do this.” Suzette is an executive producer on the series. Did she have input on your role?

I went excited to really work alongside her and break down some aspects of the story and her character. But because of COVID I didn’t get to meet her until two weeks before we wrapped. The silver lining there was that we were able to all work on our characters [on our own], objectively shaping them. And made it all the more sweet when we finally got to meet her.

So how did you get into character? Did you watch the 1997 film Selena, or any of her interviews?

[Suzette] generously provided recordings of her recounting the memories that really shaped the series. So I hard in-depth details, and was able to hear her voice and pick up clues about her personality.

Plus, the 'Desperate Housewives' actor opens up about the role & why he's never seen the 1997 film, 'Selena.'

I’ve been a fan of Selena’s family and Selena y Los Dinos since I was very young, so I knew a lot about her already. But looking at it from an actor’s perspective, there wasn’t a lot of footage.

I have to commend your drumming skills. I heard that you learned to drum for the series!

Thank you so much for the compliment because, girl, let me tell you, the first opening scene, that was two-and-a-half months after I learned to play the drums. Yeah. And it’s a six-and-a-half minute song. Because I had to learn both the album version and the live version I had to really commit. It had to seem as if I’d been playing drums for 15 or 20 years. I was given lessons by our music coach and my drum coach who worked with me and the young Suzette [Daniela Estrada]. I had a potential 50 songs that had to look effortless so I rehearsed day and night. I just really took my rehearsal time seriously because you can’t take a drum kit everywhere.

Plus Moisés Zamora previews Part One of the new Netflix show & the Quintanilla family bond.

Your character is also really into fashion and style. Was there any particular piece of clothing or haircut that helped you get into character?

My favorite look was definitely the Mohawk curls — they really got me into the ’80s rock-and-roll thing. I just love transforming in general. 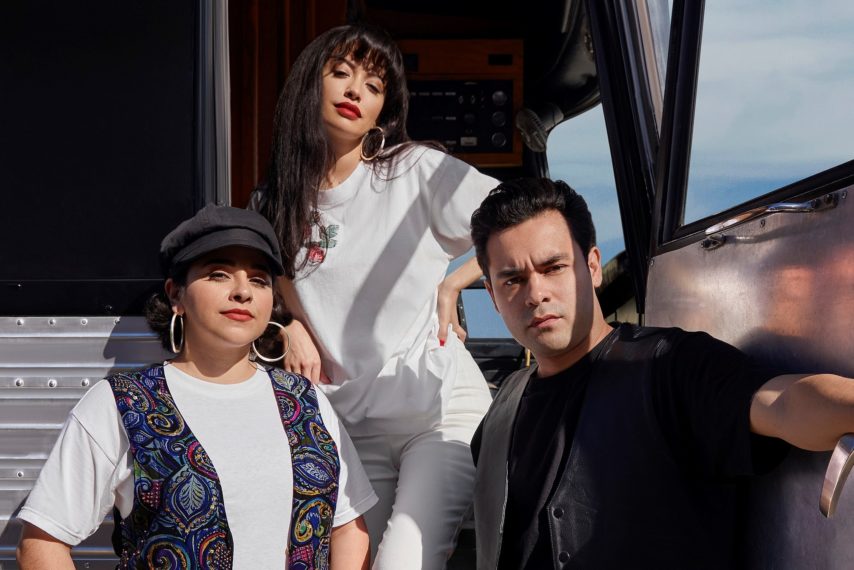 Is there anything you can tease ahead of Part 2?

Based off of fan reactions people will probably be glad to know there’s more of Selena as an adult. In the beginning you saw the adults shaping her and setting her up for her success. But when you jump to the late ’80s and ’90s, you get to see Selena as her own woman, as her own artist. It’s going to be really fun for you guys to see that trajectory.