Roush Review: Glorious Escapism in the Search for ‘A Suitable Boy’

How Jane Austen would have admired Lata Mehra, a modern 20th-century woman who sees through the pride and prejudice of her turbulent times. “This is a stupid world we live in,” Lata declares in frustration, upon learning that her university beau is unsuitable because they’re of different faiths (she’s Hindu, he’s Muslim). Somehow, she has become more independent of thought than her country of India in 1951, four years after emerging from British rule. 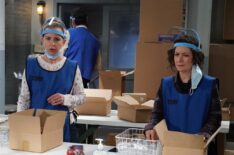 The story opens at the wedding of Lata’s elder sister to a man she barely knows, a fate Lata is determined to avoid. As played with endearing warmth, intelligence and spirit by Tanya Maniktala, Lata is a classic romantic heroine, more than a match for any man, and quite a catch. But following her heart won’t be easy, not with her fussy and meddling mother, Rupa (the lovably excitable Mahira Kakkar), on an eternal quest for a “suitable boy” to match with her daughter. “Poetry never leads to anything good,” Rupa scoffs.

This swoony series begs to differ. Lata’s, and the viewer’s, affections are torn among several ardent suitors: the dashing but self-absorbed college student Kabir (Danesh Razvi), the suave and well-off poet Amit (Mikhail Sen), and the sweetly modest shoemaker Haresh (Namit Das). In a subplot of forbidden love that could be the ruin of several families, Lata’s irrepressible best friend, Maan (Ishaan Khatter), falls under the spell of Saeeda (Tabu), a siren of ill repute harboring more than a few secrets.

With a backdrop of violent political and religious conflict, where social reform is at odds with the remnants of colonial class snobbery, Lata’s journey to lasting happiness takes on an epic quality. Yet A Suitable Boy is always light on its feet, even when the storytelling begins to feel rushed. But maybe that’s because I was so unwilling for it to end.
As one of Lata’s suitors tells her in parting, “Au revoir sounds more hopeful than goodbye.” So, au revoir to Suitable Boy. I envy those about to make your acquaintance.