Isaiah Crews Shows Acting Is More Than Just a ‘Side Hustle’

Between red carpets and the BET reality show The Family Crews, Isaiah Crews has grown up before our very eyes. Now, the son of celebrity parents — Brooklyn Nine-Nine star and America’s Got Talent host Terry Crews and wife Rebecca — is looking to break out on his own. The 15-year-old plays Munchy on the new Nickelodeon series Side Hustle, starring alongside Jules LeBlanc (Lex) and Jayden Bartels (Presley).

The live-action comedy sees the three friends finding creative ways to pay for damages done to Munchy’s dad’s police vehicle. They work with Presley’s tech-savvy younger brother Fisher (Mitchell Berg) to create an app called “Kid-DING” to connect with people looking for help with small jobs. As you can imagine, hilarity ensues from there.

The writers are making sure they 'get it right,' co-creator Dan Goor has said.

We caught up with Crews in between time on set to talk about his first big acting gig.

When did production get start on Side Hustle?

Isaiah Crews: We started filming the first episode in September. We’ve been powering through the rest of the episodes. Because we started production so late, we don’t have any weeks off. We’re going through the whole season.

You find out you landed your first big role and then COVID happened. Was there any worry that this opportunity might be taken away?

I was absolutely terrified the first time we got postponed. I thought I would never be able to act again and never come back from that. I’m glad the network liked it so much they stuck with it.

When was the moment you decided you wanted to follow in the family footsteps?

When I first saw my dad on White Chicks was when I knew. I thought that job seemed so fun and wanted to do this with my life. What’s the biggest piece of advice your parents have given you about Hollywood?

The first thing my dad told me was don’t get too big of a head. Don’t let your ego overshadow the rest of your abilities. If you get too cocky, you think you can do anything you want when you can’t. Mainly just stay humble and remember where you came from.

Have you been watching any of your dad’s past projects for comedic inspiration?

I’ve been watching Brooklyn Nine-Nine. It’s actually one of my favorite shows of all time. I was a big fan of Parks and Recreation and The Office, so I’m glad he got to work with people like [creators] Mike Schur and Dan Goor and all those amazing and talented people.

It has been my dream to see any of my family members make it big. I just love entertainment. Watching other shows that my dad has been on is helping me develop comedic timing. Learning when to hold for laughs, which is important on a sitcom. How much of yourself do you see in Munchy?

Plus, how worried should we be about that misdiagnosis?

You’re working with real-life best friends Jules and Jayden. How would you describe your dynamic with them?

We came together really quickly. Jules and Jayden were really welcoming. At first, I felt like a third wheel. When I first talked to them and hung out with them, they acted like I was their best friend for four years. I couldn’t be more thankful because you can’t have that kind of awkwardness on a show where you’re going to be together for six months straight.

What are some of the side hustles you had or wanted growing up?

I wanted to be a babysitter, but my mom wouldn’t let me. I wanted to work at Baskin Robbins for such a long time. To be honest, if I didn’t get this acting job I would have applied to work there because I’m an ice cream fanatic.

When you told your parents about your career plans, did they try to dissuade you at all knowing how hard the business was?

My mom and dad were supportive from the start. My dad and mom are in entertainment and were excited to see me follow in their footsteps. They did whatever they could to help me get there, and it ended up successful. The big premiere is this weekend. Are you there plans for a watch party of some sort?

I was going to hold a Zoom watch party with a couple of my friends and close family members and have a great time. This is my first serious, non-reality role. The only thing I’ve acted in before was a commercial for a toy called Boppi the Booty Shakin’ Llama. It never even aired, so I guess it doesn’t count.

This is my first real acting gig, and I’m really excited for it to come out. I’ve never seen myself act in anything ever. I don’t even watch the recordings of my school plays because I’m too scared. I’m really excited to see how it turns out. I think it will turn out great.

What do you think makes Side Hustle stand out?

There are so many hilarious characters and personalities we have on the show. They are incredibly funny, even off camera. We get to work with a ton of sitcom legends from the past. I can’t say who. The jobs we take. They’re pretty good. The writing, the friendship between Jules and Jayden and seeing how that plays out. Then I come in and ruin the moment. It’s pretty funny. I think a lot of people are going to like it.

And maybe dad will end up guest starring on your own show one day. 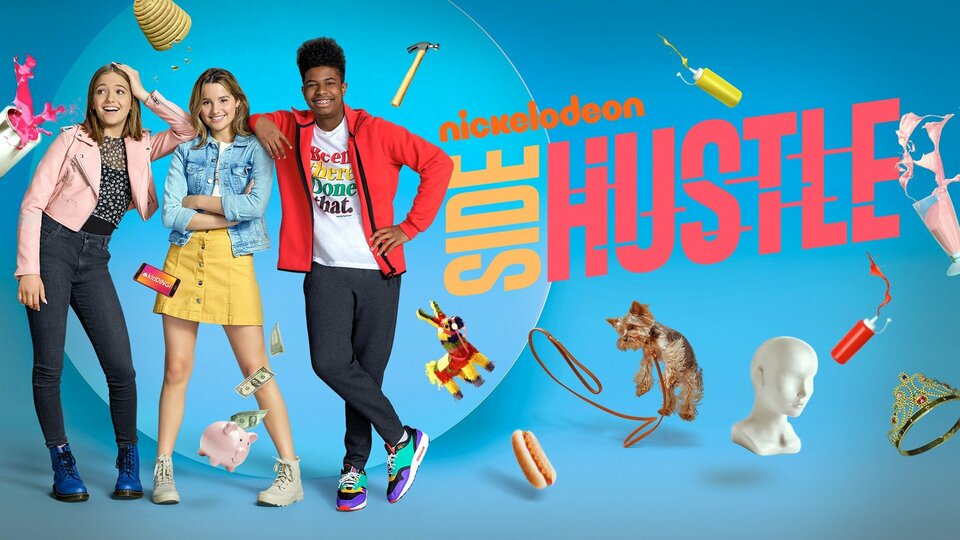 Side Hustle where to stream