One character will look very different when The Bold and the Beautiful returns.

Zende Forrester Dominguez has been recast with Delon de Metz. Rome Flynn (How to Get Away With Murder) previously played the character from 2015-2017 and won a Daytime Emmy in 2018 for Outstanding Younger Actor for his work. Daniel E. Smith was the first to play Forrester, who was adopted by Kristen Forrester (Tracy Melchior) and Antonio “Tony” Dominguez (Paulo Benedeti), from 2001-2005 with a guest appearance in 2005. 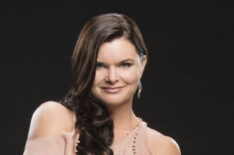 De Metz recurred on Zoo and has appeared in episodes of NCIS: Los Angeles, The Kominsky Method, NCIS, and Scorpion.

“We have a great story coming up for Jacqui. Steffy has been committed to her work, her daughter Kelly … but people have been wondering when a new man will enter her life. He’s coming,” executive producer Bradley Bell previously told TV Insider. “She’ll have a period of time where, in fact, quite a few men will be after her — as they should be.” Novlan is probably most recognized from the Liberty Mutual commercials and he also played Gregory Manes in Season 2 of Roswell, New Mexico. He is also married to Kayla Ewell, who played Caitlin Ramirez on The Bold and the Beautiful from 2004 to 2005 (and also appeared on Roswell, New Mexico).

Air dates for their debuts have not been set yet, but The Bold and the Beautiful has returned to production (and was the first daytime soap to do so).