‘The Walking Dead’: Expect a ‘Legendary’ Battle in the Season 10 Finale

It may still be unclear when we’ll see the Walking Dead Season 10 finale, but all the teases about it makes it sound like quite the event.

Like the rest of Hollywood, the AMC drama had to shut down due to the coronavirus pandemic, and since they couldn’t complete post-production on the finale, the season ended with Episode 15 (on April 5). “The Tower” set the stage for quite the confrontation, with Beta (Ryan Hurst) and his walkers approaching the hospital where many of the survivors were.

“It’s like a full-on Game of Thrones super war battle,” Norman Reedus, whose character Daryl was outside the hospital with Cailey Fleming’s Judith, told Entertainment Weekly. “It looks so grand on an epic scale. Those battle scenes are going to be legendary.” 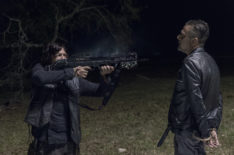 And just like Game of Thrones‘ battles, we’re probably going to have to say goodbye to at least one character before the TWD finale’s are over. But how bloody will it be? Until it airs — AMC’s initial statement said it would be “a special episode later in the year” — all we can do is speculate as to what will happen and who Beta will take out. What we do know is that Lauren Cohan’s Maggie is back, as glimpsed in the sneak peek at what’s to come. Cohan is set to return as a series regular for the upcoming 11th season, so at least we know her character won’t be dying. (Pre-production on that season has also been delayed.)