'Making the Cut' Winner: Episode 4 'Was the Game-Changer for Me'

[Warning: The below contains MAJOR spoilers for the season finale of Making the Cut.]

Going into the last two episodes of Prime Video's fashion competition show Making the Cut, three designers were left: Sander Bos, Jonny Cota, and Esther Perbandt. Only two would make it to the final runway show in New York, where a winner would be crowned.

In the last elimination before giving a business pitch to Christine Beauchamp, the head of Amazon Fashion, Sander, Jonny, and Esther put together their own pop-up shops. Jonny won that challenge and Sander was eliminated. And after facing off on the runway, Jonny beat Esther to win the entire competition. Does Gunn actually like watching himself on the show? And how will things get shaken up as we get deeper into the season?

He wins $1 million to invest in his brand — he's launching a namesake label — as well as a one-year mentorship with the Amazon Fashion team and a collection to be sold exclusively in Amazon Fashion's store.

Here, Jonny celebrates his victory and looks back on the season of Making the Cut.

First of all, congratulations! And I adored your "Does that mean I win?" comment. Did you worry there was a twist coming?

Jonny Cota: I haven't even seen the episode, but I remember the moment. I think they eliminated Esther, but they never said, "Jonny, you're the winner!" It took me a minute. I was shocked, and I didn't believe it. Can you talk about rebranding your line from SKINGRAFT to your name, and how much that was on your mind throughout the competition?

To be honest, rebranding from SKINGRAFT to Jonny Cota has been on my mind for five years. I've been wanting to launch my namesake label but not having the courage to step out of my comfort zone.

As soon as I arrived on Making the Cut, I was just beaten down by the judges at the beginning. They really tore apart my SKINGRAFT vision of me that I had created for so long. When you tear something apart, it gives you the opportunity to build something new. It was kind of awesome cosmic timing for me to rebrand myself as a designer and rebrand myself as a brand and launch something incredibly new.

You won the pop-up challenge. How much did that mean to you since it was the debut of your namesake label?

Oh, winning the pop-up challenge was heavenly. Seeing the letters of my name on that wall — I cried when I walked in and saw that. I was like, "Oh my God, my lifelong dream is happening." To win that challenge, it made me feel fully validated in my skills as a creative director that go beyond sewing. And that's what I've argued with the judges. "I can do more! I can do big things! I'm just not great at sewing!" So it really validated that. Plus, find out what kind of show they'd like to do together next.

But more importantly, looking back, I see that it gave me a confidence and momentum to go into that business pitch with Christine Beauchamp and to go into that finale runway show thinking, "I have a chance, I deserve to be here, and I want to win."

You also won two other challenges. Does one stand out more to you, either because of the challenge or your designs or something else?

Winning Episode 4 with my striped dress was the game-changer for me. I arrived on the competition very timid, feeling like I didn't even know if I belonged there and not knowing how many challenges I would survive. Episode 4 was my first win and [it] changed my trajectory in the competition. It was the first time I thought, "I have a chance, I could win this." Going forward, which challenge do you think you’ll keep in mind the most while designing?

Not to be boring, but winning that challenge with the striped dress. It was so out of my comfort zone. There was no leather. There was print. It was so feminine and so soft, but what it taught me was no one will leave the house only wearing leather jackets. They need a full closet. What does your customer wear with your leather? What other things do they love that go well with my aesthetics? It's taught me a great lesson about building out a closet of my collection for my customer to give them a fully-realized wardrobe. What are the best pieces of advice from Tim Gunn, Heidi Klum, and the other judges that you're keeping in mind?

Know your audience as a designer and what you believe in, but be open to change. Be open to growth. Tim and Heidi really celebrate designers who are willing to listen to critiques and know that they come from a place of love because they just want you to be better. They want you to grow, and if you are too stubborn in your ways and can't take in any critiques, then where's the growth?

How much did it mean to you to have moments with your family during the competition? You were home with your husband, then your parents and niece and nephew were at the pop-up shop.

Watching the episodes, I'm thinking, "Wow, Jonny Cota, you are an ugly crier." The show was so emotional. It's so exhausting. And the pop-up challenge, it was a total surprise that my parents showed up with my niece and nephew. I'm so focused on doing a great job, but when you see your family walk in and they're so proud of you and they're beaming, nothing else matters. That's all I could focus on, and it was one of the highlights of the whole journey. 8 Fashion Shows (Aside From 'Project Runway') Worth Checking Out (PHOTOS)

Get inspired to revamp your closet for spring with these eight new and lesser-known style series.

During which speech were you more nervous — the business pitch or telling the judges why you should win?

Oh, the business pitch! Pitching yourself as an entrepreneur is a talent and a skill that most fashion designers do not practice and maybe don't excel in. I worked on that business pitch for weeks. I was more nervous about that moment with Christine Beauchamp than I was with any judge.

Is there anything else you've taken away from the overall experience? 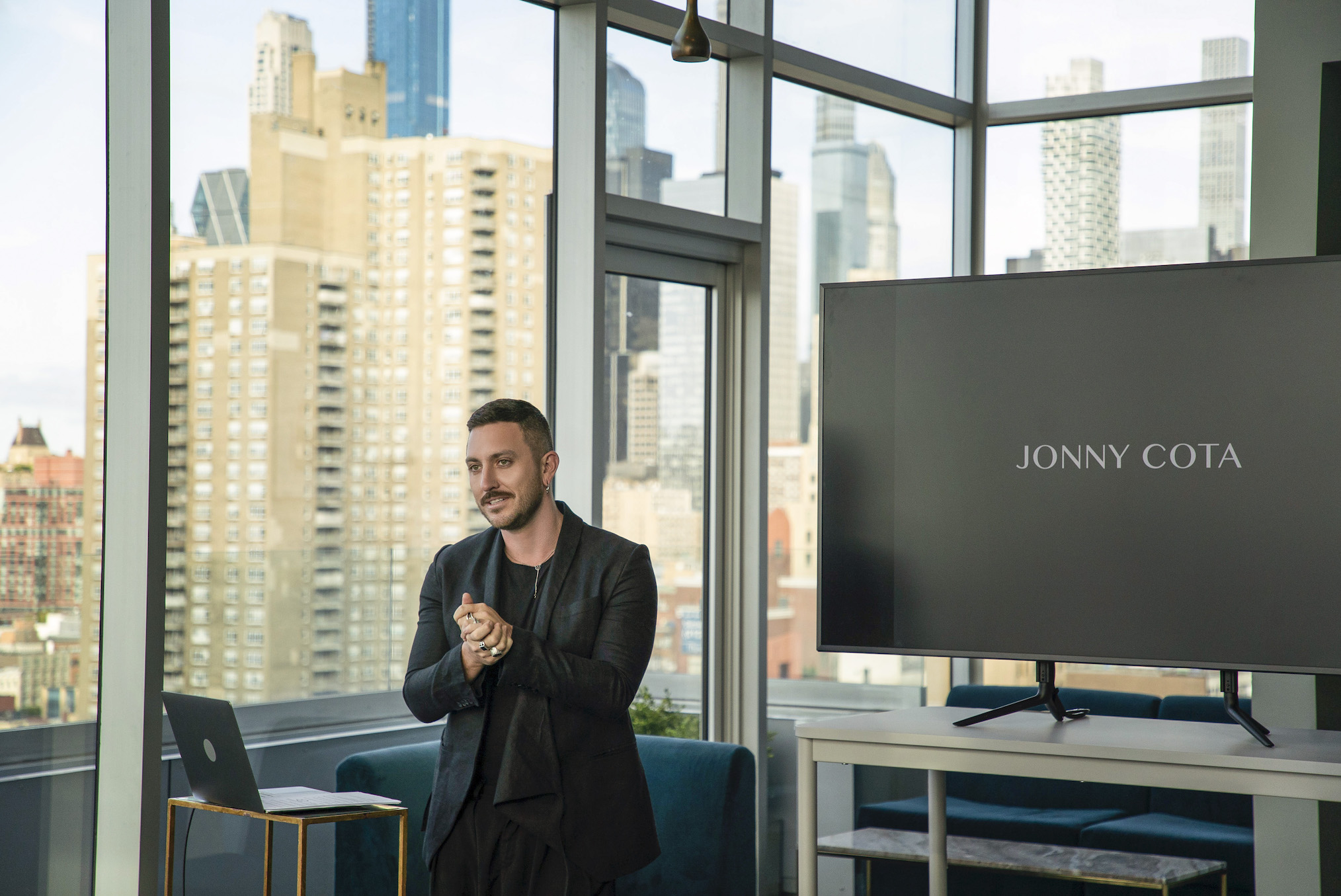 What have you been up to since filming? Your mentorship with Amazon Fashion began in September.

Right. The mentorship began as soon as we wrapped filming, and I've invested most of my time designing and producing my collection that's launching with the finale. I check in with the Amazon mentorship weekly, and we've been working together to make this Jonny Cota Studio launch as powerful as it can be.

What has surprised you the most about your reaction to seeing your winning looks on Amazon, and are you at all prepared for your winning collection to go up?

I was shocked at how giddy I was to see my winning pieces on Amazon. I've been selling e-commerce for 10 years; having a dress online, who cares? But to see it on that platform and to know the whole world was seeing it filled me with an extreme excitement. This weekend when we launch my namesake label to the world, I can't even imagine how exciting it will feel.