Rhea Ripley isn’t having the typical road to WrestleMania given some unprecedented circumstances. But the 23-year-old Aussie isn’t letting that stop her from soaking in every moment.

The NXT women’s champion is set to defend her title against Charlotte Flair at WrestleMania 36 before an audience-less WWE Performance Center. It’s the culmination of a journey in finding herself as a sports entertainer. A realization of a dream. As the superstar gears up for her historic showdown with “The Queen,” the butt-kicking lady in leather tries to put it all in perspective.

The coronavirus outbreak is not stopping WWE from producing shows and hosting 'WrestleMania' 36 at its Performance Center — without fans in attendance.

WWE produced this incredible video feature on you where you were able to go to Raymond James Stadium on your road to WrestleMania. Plans have since changed, with the “Show of Shows” moving to the Performance Center. What has been your mindset the last few weeks as things started to unfold?

Rhea Ripley: Being in Raymond James Stadium in Tampa was super cool. It was awesome to think I was going to walk down the ramp there in front of 80-plus thousand people. Now that it has been moved to the WWE Performance Center, it’s still WrestleMania.

I’ve still been working for this for years and years. I’ve been wrestling nearly eight years now. I’ve been working toward something like this. It’s going to be weird definitely, wrestling in front of zero fans. But there are people at home watching. That’s the main point. With all the negativity going around right now, people at home need this escape from the world. They need to enjoy something. 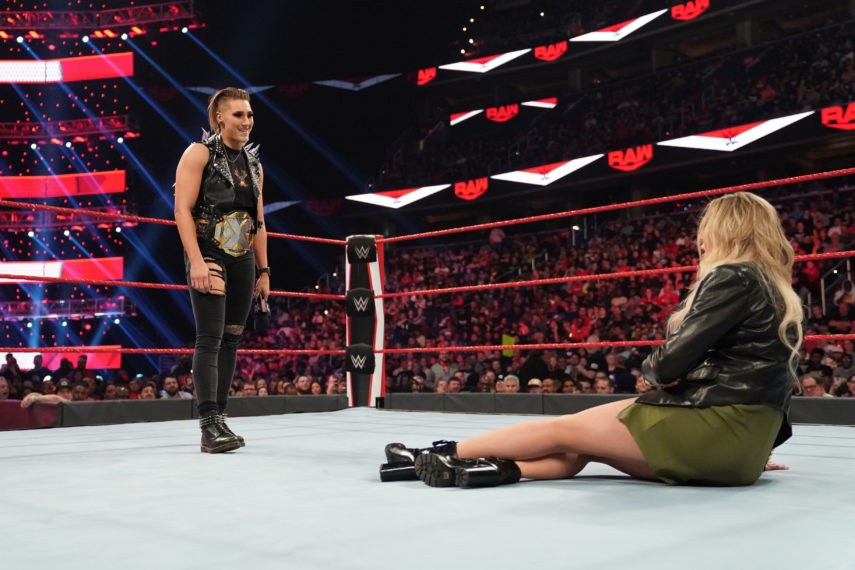 You mention people watching from home. I’m sure you had family planning to travel from Australia to see you perform in person. How supportive have they remained during this uncertain time? Have you remained in contact with them the last few weeks?

It’s such a big thing for my career. I wanted them to be there and a part of it with me. They’ll be watching from home. I can hear my mom screaming at the TV right now. I’ve been talking to them here and there when I’m not trying to get everything organized. I know that they are there and cheering me on. They are going to support me no matter what. It’s definitely sad I wont’ get to see them in person. The superstar is helping redefine the super heavyweight in NXT.

But if it’s not going to be in a packed stadium, do you find comfort in knowing it’s in a place you honed your skills and evolved into the professional you are today? I almost see WrestleMania as being a sort of graduation day for you and all you’ve accomplished. Is it a come full circle moment?

Definitely. It’s so strange looking at it and the setup. It just feels like another day at work, but it also has this special feeling as well. It is a come full circle moment for not only me, but people like Charlotte haven’t been at the Performance Center for a long time. They haven’t performed there in a long time. To see them all come back and perform, it’s weird, yet super cool.

During your training, I’m sure you’re taught how to be mindful of the crowd. However, in this situation you have to think that there isn’t anyone in the seats. You have to think more about the people watching at home. What has the experience been like making these adjustments in the ring?

It’s super weird not having people make noise around you. I don’t think there is preparation that goes into it. I haven’t really prepared for it. I have to remember there are people watching and are making the noise fans would be making if they were sitting there watching you live. At the end of the day I’m going in to do one job: Beat Charlotte Flair. That’s what I’m going to try and do. You’re not only making history for yourself, but NXT as a brand. This is the first time an NXT title is defended at a WrestleMania. How much does it mean to you to be able to represent a success story for a brand that has grown exponentially in the past year?

It’s absolutely insane to think that I was in NXT UK just over a year ago, and now I’m now competing in NXT on the USA Network live every Wednesday. And that I’m now the NXT women’s champion. It’s a proud feeling.

To be able to be the first person from NXT to defend my title at WrestleMania is insane. I don’t have another word to describe it. I’m proud and humbled by it all. We’ve been saying it for a while now that NXT is not developmental any more. NXT is the main roster. To have NXT be part of WrestleMania was really that next step. I’m so excited and ecstatic I could be that person to take that next step.

Your opponent, Charlotte Flair, is known for her WrestleMania matches. What are your thoughts being on the opposite end of the ring from her in this environment? What can fans expect?

Ever since I came out on the first Mae Young Classic, people would always compare me to Charlotte and a few other girls. To be able to make myself so different and become more myself, fans started to want to see me and her in the ring together. I thought that was really cool.

To see three years ago, people wanted to see this match, now they are finally getting it at WrestleMania. The thing they can expect from that is a hard-hitting match. We’re not going to hold back at all. I don’t know if she has any fancy stuff planned. You know how she likes the moonsault. I’m ready for anything. I feel it will be an equal match. We’re here to entertain, and that’s what I want to do.

Is there anything you’re doing to mark the occasion, whether it’s through your ring attire or memento? What are you doing to commemorate this WrestleMania ?

I definitely have some fancy gear planned. Well see if I get it done in time. I’ve got something; I’ll be sporting. I think people will be very happy with it. I don’t want to give it away.

With you being a fan growing up, what’s your first memory of WrestleMania? Do you have a favorite match or moment?

I love everything about it. I don’t think I have anything specific. I’m just a fan of wrestling. I don’t remember bits and pieces. I just remember as a whole the way it made me feel. Wrestling my whole life has made me so happy and excited. It has hooked me for life. Every WrestleMania has felt special to me. Every episode of Raw, SmackDown, even the Main Event. It’s all special to me. I love what every performer leaves in the ring because they all love what they do, and you can see that.

What was your first wrestling memory that got you hooked?

It’s funny, I was always a brutal kid. I loved all sports. My family friends introduced me to wrestling by showing me the match between Triple H and Ric Flair. Me being me, I loved the spot with the screwdriver. That definitely got me hooked. I thought, “I want to do this.” My parents didn’t like that. They were like, “Really, you want to do this?” I’m like, “Yes, yes I do. This looks amazing.” 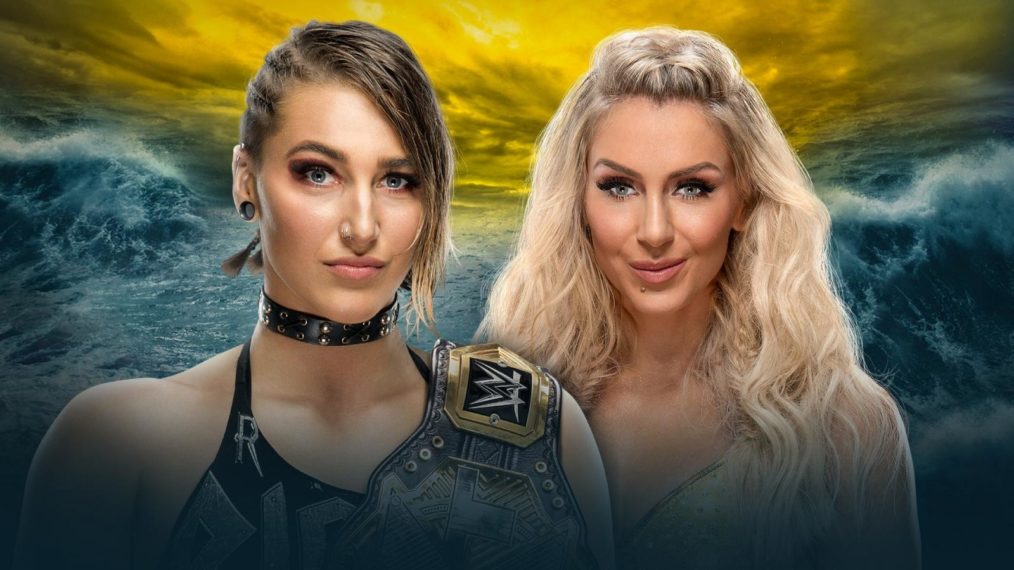 Now you’re working alongside Triple H, who I’m sure is still a big inspiration to you. Have you been given any pearls of wisdom heading into this big match and event?

It’s so weird having Triple H as my boss because he was legit the reason I started watching wrestling and started wrestling. Over my time on NXT UK and NXT he has always been there for me. He has always given me great advice with everything I’ve done.

With what is going on at the moment in the world, I unfortunately haven’t been able to see anyone. I just have to keep remembering all the advice they’ve been giving me over time and put it all together and put on the best match I can and make them proud. That’s all I want to do is make them proud.

With pretty much every major event canceled or postponed, somehow WWE has found a way to make WrestleMania happen on the day it was scheduled. Not only that, but over the course of two days you’re going to be able to present an escape for so many at home who could use it. How do you feel about being part of this overall effort?

It’s incredible what we’re doing. WrestleMania is legitimately too big for one night. This is the first time it’s going to be a two-night thing. We’ve got April 4th and April 5th at 7pm. It’s something people can look forward to.

There is so much negativity in the world right now. This will be an escape for everyone. I’m glad we can be the ones to put on that show for them and bring a little bit of happiness to everyone’s life at least for two days. They can even go back and watch it again and again, and keep being happy over it.