Conrad’s Job Is on the Line on ‘The Resident’ — Is Bell on His Side? (RECAP)

[Warning: The below contains MAJOR spoilers for Season 3, Episode 9 of The Resident, “Out for Blood.”]

Red Rock wants Conrad (Matt Czuchry) gone, and in Tuesday’s episode of The Resident, Bell (Bruce Greenwood) has a choice to make: help them make that happen or lose his job as CEO.

Conrad made the mistake of getting on Cain’s (Morris Chestnut) bad side, which means he’s on Red Rock’s bad side. And Logan (Rob Yang) is the one attempting to maneuver the pieces into place. But because of who Conrad’s father is, they can’t just fire him without cause. That’s where Rob Spiro (Trevor Long), the patient Conrad “tortured” (if you ask Logan or Devon) to extract the location of his hostage comes in. He’s suing the hospital (and named Conrad) for the treatment he received.

“This gives us the perfect way to get rid of Hawkins,” Logan says, barely containing his glee. “Spiro’s out for blood, and we’re going to give it to him,” Cain agrees.

While Logan is sitting in on the deposition, so is Bell, who assures Conrad that while he hasn’t always been on his side, “I am this time.” Unfortunately, there’s nothing he can do about Red Rock sending lawyers fresh out of law school instead of their best. Conrad claims that pain medication can be withheld due to a patient’s respiratory issues, while Spiro speaks of the pain he was in — and the lawyers barely question him.

That’s when Bell realizes Logan is using this to get rid of Conrad. “Every year, whistleblowers like Hawkins cost hospitals millions,” Logan explains. He’s a liability. Bell refuses to let this fly, but Logan delivers an ultimatum: “Red Rock gave me authority to do whatever’s necessary to protect Chastain’s bottom line, so if Hawkins isn’t gone by end of business, then today will be your last as CEO. It’s him or you.” And so for the rest of the episode, we see a Bell who’s struggling with what to do next. He plans to make Red Rock think he’s on their side and try to save both his and Conrad’s careers, but then he has Conrad thanking him for having his back.

Bell stays in the room while the staff is questioned about Conrad and his treatment of Spiro. The doctors, of course, have nothing to say against Conrad. But the best part? “I saw him cut in line in the cafeteria once,” AJ (Malcolm-Jamal Warner) quips when asked about Conrad breaking rules.

Bell gets what he knows Red Rock needs when he learns that Devon (Manish Dayal) requested a new resident around the same time they treated Spiro. Though he hesitates, he does tell Logan to question the intern.

Earlier in the episode, Devon confronts Conrad about not wanting to work with him and his treatment of Spiro. As doctors, they’re supposed to help people, he argues, whereas Conrad “breaks rules, ignores protocol.” What he did to Spiro, he did for himself — and Conrad agrees. “I had to make a choice I could live with,” he explains.

And that’s what Devon has to do as well when he’s questioned. Yes, he saw Conrad go into Spiro’s room alone. Yes, he asked to be reassigned because they disagreed about things like the treatment of Spiro. But he pauses when asked if Conrad tortured the patient. (Logan is practically on the edge of his seat, expecting to hear exactly what he needs to get rid of Conrad.) “Mr. Spiro was in respiratory distress. Pain medication needed to be withheld,” Devon says. “This man is alive today because of Dr. Hawkins.”

“I didn’t do it for you,” he tells Conrad after. “These patients need you, and I had to make a decision I could live with.” The hospital needs doctors like both of them — especially with what comes next. 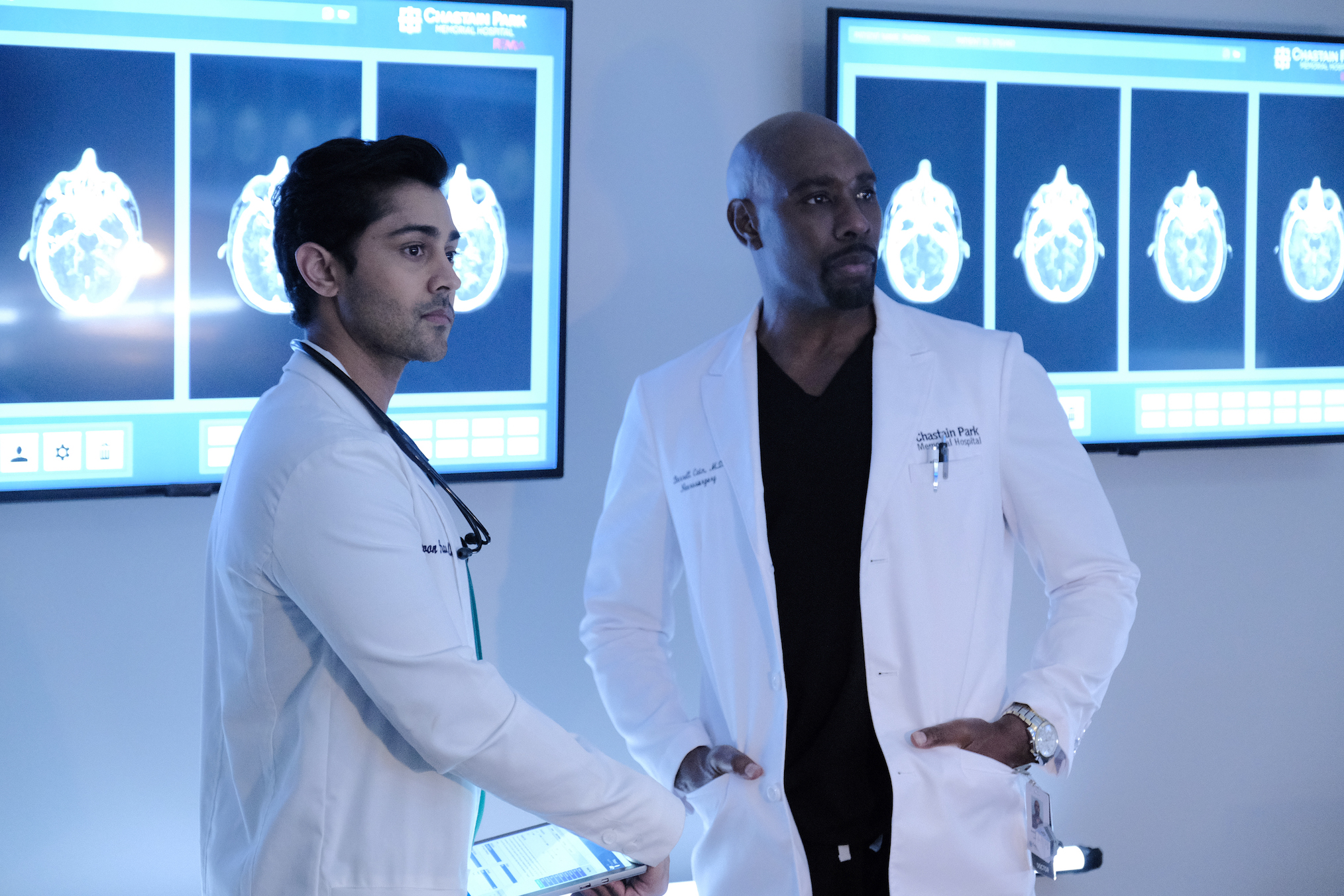 Just as Logan is ready to pack Bell’s office up for him, the doctor sends him an email resigning as CEO. But he’s staying on as chief of surgery, thanks to his “bulletproof” surgical contract.

“Today Red Rock asked me to turn against one of my own doctors. And tomorrow they’d just ask me to do something worse,” we hear Bell’s voiceover as he finds his new office. “There’s a bloodbath coming. I don’t even want to be up there when it happens,” he tells Kit (Jane Leeves). “Down here, I can survive.”

But that doesn’t mean that he and Conrad are both safe. Things are about to change in a major way at Chastain. Who will come in as CEO? Will Red Rock tear apart Bell’s contract until they can find a loophole to remove him from the hospital? Will Red Rock’s eyes and ears at Chastain figure out a way to send Conrad packing?

But at least Chastain’s doctors are all on the same side against Red Rock, right? Bell, in particular, has come quite a long way from who he was when we first met him. His conversations with Conrad in this episode highlight just that.

“We’re going to put Bell in a pretty precarious situation,” executive producer Todd Harthan told TV Insider earlier this season. “Now we’ve found ways to humanize him and again, peeling back the layers of who he actually is and putting him in situations where you get to see different colors from him. This season is going to be an incredible ride for him. The audience is really going to be excited and surprised by where we’re taking him.” “You’ll see a lot of our heroes fighting their own individual battles and then it’s strength in numbers and what the audience will get to look forward to is how do they all come together to slay this new goliath. That’s the arc of the season we’re building. The way they come together and the way they fight it is the drama that will hopefully excite the audience,” the EP also teased. “Our group does not give up easily, and it doesn’t matter how strong the opponent is. In this case, it seems like it’s not something they’re going to be able to fight successfully, but they’re a tenacious group.”