[Warning: The below contains MAJOR spoilers for the Season 17 premiere of NCIS, “Out of the Darkness.”]

Where has Ziva David (Cote de Pablo) been since her “death”? That’s what fans want to know, but can Gibbs (Mark Harmon) get the answer before the two are knee-deep in trouble in the NCIS premiere?

No, and Gibbs isn’t even the one to find out why Ziva faked her death. That honor belongs to Bishop (Emily Wickersham), who then must face the wrath of McGee (Sean Murray) when he learns the truth.

And what does Tony (Michael Weatherly) know? We’ll have to wait to find that out.

Will Tony Return to 'NCIS' as Part of Ziva's Season 17 Arc?

A man’s trying to sell another man a burner phone when Gibbs, looking very bruised and bloody, takes his car — at gunpoint. He calls out to Ziva, who’s also in rough shape, and when she joins him, she’s gotten what she needed: fingers.

Eighteen hours earlier, Gibbs tries to get answers out of Ziva, but they come under attack. Fortunately, they put together a makeshift bomb to take out one of the shooters — and that’s the dead body waiting for the team when they respond to a report of shots fired. Gibbs, however, is MIA. But Bishop does find a piece of fabric in the old coal chute they assume he used to escape. Once they’re far enough away, Gibbs once again tries to get answers out of Ziva. All she can tell him is that a woman, Sahar (Mouzam Makkar), wants her dead. Though she works with a team, Sahar is the true threat. Ziva doesn’t know who she is or what she looks like, and she wants Gibbs to let her take care of the problem while he goes to a safe house. She has to find Sahar and kill her so she can get back to Tony and Tali.

But what does Sahar want with Gibbs? She wants to use the most important person to Ziva as leverage; she doesn’t know about Tali and Tony is considered “tales of old heartbreak.”

In flashbacks, we see Adam (Damon Dayoub) telling Ziva the world thinks she’s dead and promising they’ll work together and neutralize the threat, and she’ll get her family back. We then see he tried to stop Ziva from leaving once they learned Sahar was targeting Gibbs.

Bishop, meanwhile, returns to Ziva’s old office, where she confronts Odette; she recognized the fabric from Ziva’s coat. Odette reveals that Ziva faked her death to protect her family because she was the target of the explosion at her father’s farmhouse. She went deep undercover to find the person who wanted her dead. It’s not her place to reveal what Tony does and doesn’t know.

But Bishop wasn’t expecting McGee to ping her phone, and she reveals that Ziva’s alive. He’s understandably upset that she kept this from him — Ziva was a sister to him — but he does put his anger aside to work with her to help Gibbs and Ziva. To do so, they try to keep the truth from everyone, but end up telling Torres (Wilmer Valderrama) and Palmer (Brian Dietzen) overhears them talking. Torres does contribute something of importance: no one comes after you that hard unless you kill someone who matters. Vance (Rocky Carroll), however, remains in the dark, as does Kasie (Diona Reasonover). 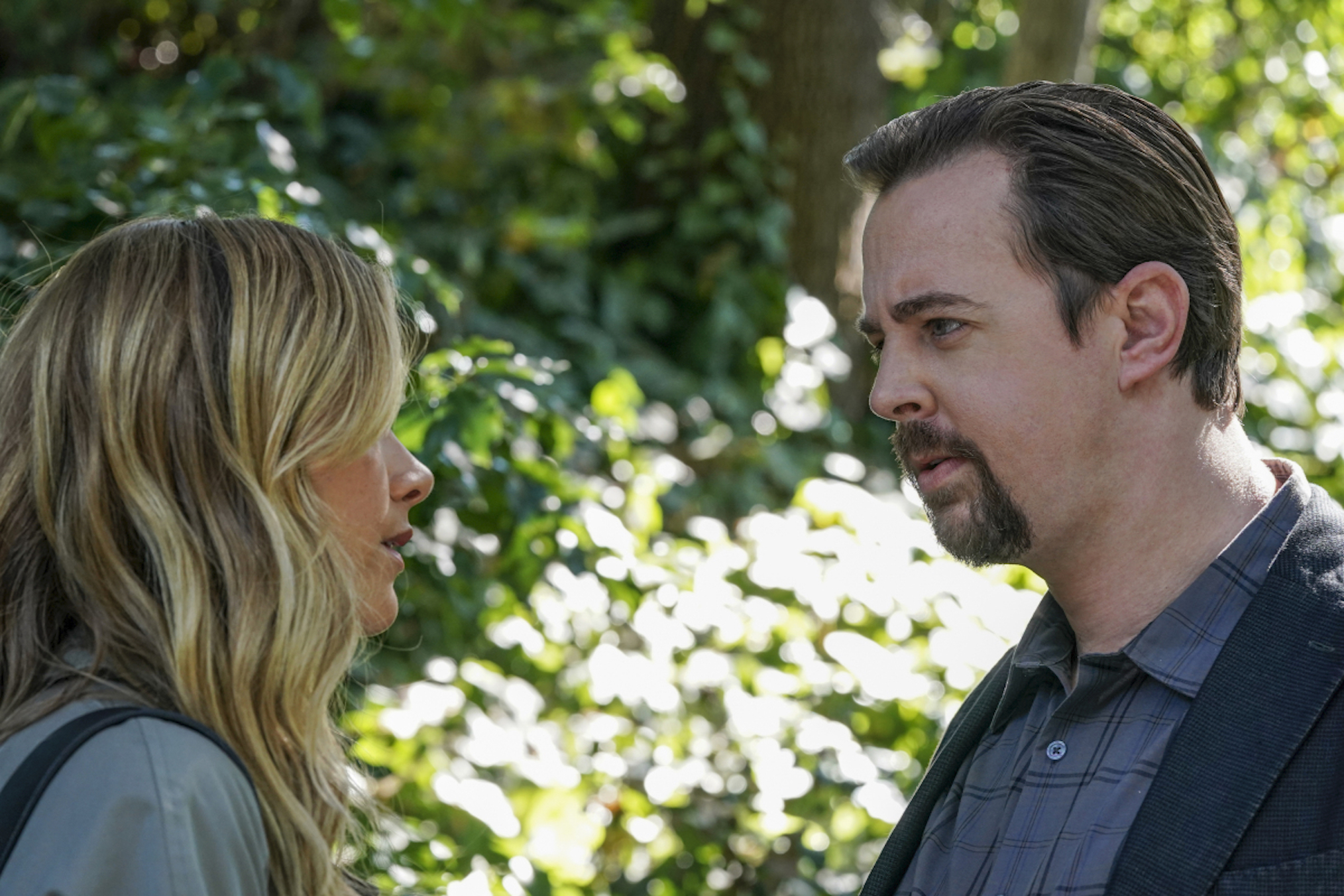 Speaking of those two, they set out to retrieve intel from her contact, under a seat on a bus. While they wait for the passenger sitting there to leave, Gibbs tries to ease Ziva into a conversation, but she knows he wants to ask about pills he saw her with earlier. First, she tells him about Tali wanting her to buy a necklace a couple months before the explosion, and after, she told her she wanted her mother to wear it. If Gibbs had the chance for one more moment with his daughter, wouldn’t he do anything to get back to her? One of Ziva’s demons is anxiety, and the pills quiet it, but they also dull he senses, so she can’t take them.

When the passenger leaves, Ziva checks under his seat, but the SD card is gone. They follow him, and Gibbs ends up having to shoot him. Ziva’s angry he didn’t just wound him, but they have bigger problems: he sent the file to someone already. They need someone to decrypt it first, meaning they have to loop in McGee, even though Ziva doesn’t want to put him at risk. That phone call also provides them with important information: Sahar’s full name, courtesy of one of Bishop’s CIA contacts.

Will Ziva Ever Be Free of Ari?

The SD card leads Gibbs and Ziva to a penthouse downtown belonging to a Mr. Rogers (Hossein Mardani). His men take their weapons, and he claims not to know Sahar, until they mention her full name and Ziva introduces herself. He notices her necklace and takes it. He knows that a woman like her only wears her heart or her albatross and wonders which it is. Why does Sahar want her dead, she wants to know. Because of her albatross, her burden, her brother Ari, Mr. Rogers reveals. Before Ziva can press for more information, a sniper takes Mr. Rogers out. Gibbs and Ziva escape the scene, but not before she gets her necklace back. And with that, we’re caught up to the opening scene, only this time we see Gibbs jacking the car from McGee, Torres, and Bishop’s point of view. Though they want to follow, they hang back when Ziva shakes her head to tell them to stand down.

But in order to do what Ziva wants, McGee must stand up to Vance because Palmer spills the beans, just like he worried he would if he was left alone in HQ. So, even though they know where Gibbs and Ziva are heading — Sahar’s dead men had bed bugs on them, which helped lead them to an address — they can’t go as their backup. They have to trust her, and Vance reluctantly agrees.

Ziva doesn’t need them to back her up, anyway. Her associate is bringing her and Gibbs everything they need to take down Sahar. And she refuses to take her alive. As she sees it, her only way back to Tali is if the other woman is dead. Gibbs thinks Ziva will lose who she is if she goes outside the law and admits that he would do anything to have one more moment with his daughter, but she’s gone.

And here’s where the real heartbreak comes. Ziva wasn’t talking about Kelly. She was talking about herself. After her death was reported, he didn’t question it or come looking for her. He abandoned her. Ziva’s associate, Odette, pulls up with a trunk full of weapons for them before either of them can say more. And Odette reminds her that Tali’s on the other side, waiting for her. But who will Ziva be on the other side? They take out the men guarding the diner where Sahar’s holed up. Once both turn their guns on Sahar, she surrenders. Gibbs cuffs her, but that’s not enough for Ziva. Gibbs stands between the two women, and there’s more: Sahar says that if Ziva kills her, a US Senator will be dead by morning. Gibbs disarms her, but Ziva has another gun. What will she do?

We’ll have to wait until the next episode to find out.

Out of the Darkness