‘How to Get Away With Murder’ Season Finale: Annalise’s Homecoming, More Dead Bodies and Frank’s Future

Spoiler warning! This article reveals details of How to Get Away With Murder‘s second season finale.

In the end, there were two dead bodies, the resolution of a series-long mystery and the potential exit of one original cast member. Still, perhaps the most shocking part of How to Get Away With Murder’s Season 2 finale was how character, rather than plot, driven it was. Much of Thursday-night’s episode focused on Annalise’s (Viola Davis) return to her hometown of Memphis, where she faced a bumpy reunion with her estranged father and, with the help of mama Ophelia (Cicely Tyson), finally made peace with the death of her baby boy a decade earlier. We talked with show creator Pete Nowalk about his decision to take a quieter character-based approach, the finale’s various twists and what we can expect when the hit drama returns for Season 3.

You made a bold move in this finale, tempering the twists the show is famous for with quieter moments that explored Annalise’s family history. What motivated that?
I was very nervous about it, but I think that’s what excited me about doing it. I wanted to do something really different. And I wanted to bring Cicely back, and because she’s so busy, she was only available to us for the finale, so that triggered the idea of having Annalise go home. The rest of our [midseason and season] finales have been pretty suspenseful and crazy, and I was like, there’s no way we’re gonna be able to recreate the twists and turns of the Hapstall mansion murder night. It was just really appealing to go in a different direction, and what better way to do that than to explore Annalise and her past?

You introduced us to family members we hadn’t met before, including Annalise’s father (Roger Robinson) and sister (Gwendolyn Mulamba). Will you be mining those relationships going forward?
Yeah. And I have to give a lot of credit to the actors who played her family members. Those are actually people that Viola recommended for those parts because we didn’t have much time to build those relationships. So it was great that these actors already had connections with each other, so they could just dive in and create the nuance and an intimacy that felt real. To me, we’ve just scratched the surface of what her relationship is with her sister and definitely her father. I think one of the original scars for Annalise, and really the theme of this finale was, can you trust any men? Can Annalise trust any of the men in her life? She clearly couldn’t trust Sam, or Frank, and now here’s her father, who pretty much cut bait on the family when she was young. It’s about exploring what makes Annalise behave the way she does, and it’s all unresolved. It’s an area we can continue to explore in future seasons.

Annalise did seem to find one man she could trust: Nate (Billy Brown), who showed up at the family home in Memphis. Their scenes together were sweet.
They were sweet, and thank God! If Nate happened to be the rat, or he was the one betraying her, I don’t know how Annalise could go on living. There’s only so much one person can take. He’s the one bright spot in her life right now, and that’s another thing we really have to continue to write towards. We haven’t really shown why, with their sordid backstory, Nate chooses Ananlise and why she chooses him. But they are drawn to each other in a very instinctual way.

Are Annalise and Nate officially a couple now?
No. I don’t think anyone’s an official couple on the show. And I don’t think Annalise is a person who asks questions like, “are we exclusive now?” [laughs] She kind of lives free. And what I love about that for the both of them is they’re mature. They’re not being too needy. They’re just kind of seeing where it goes.

I think a lot of fans expected the finale to end with the murder of a major character, not unlike when Rebecca was killed off at the end of Season 1.
Yeah, and I don’t like to do what’s expected. [laughs] That feels like a trope to me. I wanted to do what felt different. That’s not to say we won’t have more major people dying. That happens, but just for this finale, I wanted it to be different.

You did kill off Wes’ (Alfred Enoch) shady dad, Wallace Mahoney (Adam Arkin), who was shot on a New York City street right in front of his son. Why did that feel like it should be the final twist of the season?
Because it shocked me, and it left me asking questions. It was a mystery that felt real. Wallace is this really successful billionaire hedge fund guy who was yelling at someone on the phone right before he was shot, so it opens up a lot. And poor Wes. He’s been through so much, and it felt like, let’s just put him through more! [laughs]

The guy does seem cursed. People around him are always dying—his mom; Sam (Tom Verica), whom he killed; his girlfriend, Rebecca; and now, his dad. You’re putting him through the wringer!
Well, it is Shondaland. [laughs] I learned from the best! Look at poor Meredith Grey. But I agree he does deserve a break. I’m excited to see where his relationship goes with Annalise next season. They’ve been on opposite sides for so long. I really want to switch that up next season. He understands now why she’s been keeping so many secrets from him: She was actually trying to protect him from the most horrible realization about his father [who raped his mother]. I don’t know if Wes can forgive Annalise, but I think he can at least understand. Frank (Charlie Weber) didn’t seem too thrilled to learn that Wallace was Wes’ dad. Could he be the shooter?
Wallace was a bad guy to a lot of people, so there’s a lot of options for his killer, but Frank is definitely at the top of the list. I feel like I know who shot Wallace right now, but I’m leaving myself open to changing it.

We also finally learned why Frank felt he had to kill Lila for Sam, a murder that took place way back in the show’s pilot: Frank was partly responsible for Annalise’s car accident, which led to the death of Annalise and Sam’s baby.
I came into the season wanting to figure out a way that Frank had basically killed Annalise’s child. That felt like the ultimate betrayal, and I could really understand why Sam would not want Annalise to know that.

After Annalise learned the truth, Frank cleaned out his apartment and seemingly left town. What does that mean for Charlie’s future on the show? Is he not returning next season?
I don’t want to say one way or another. That’s all to be decided, I guess. All we know is Frank has cleaned out his [place] and left. That’s all I can say.

You also killed off Caleb Hapstall (Kendrick Sampson), who was shown in a bathtub full of blood. Will part of next season focus on who murdered him?
Well, it looks like a suicide.

But you never really know on this show!
That’s true! [Laughs] I’ll tell you this, but I can take it back if I want because we haven’t started working on next season yet: The Hapstall case was designed to last just one season, so I’m doubtful we’ll revisit that.

Are we to trust that Caleb really was the one who murdered the Hapstall parents and his aunt? Or is that just the version of the truth Annalise sold to the DA?
It’s up to interpretation. As we were writing it, I didn’t want to make it too clear because it would’ve felt like Scooby-Doo to me—like all of a sudden, we have all the answers! And that never happens in the real world. We don’t ever really know who did the crime unless someone confesses, and even then, sometimes they’re false confessions. To me, it was really keeping to the theme of the show that, in the justice system, you just never know. Annalise believes that Caleb did it. It makes sense that he did it and that he’s been playing them all along. But I don’t want to tell the audience one way or the other, or we would’ve done it in the show. 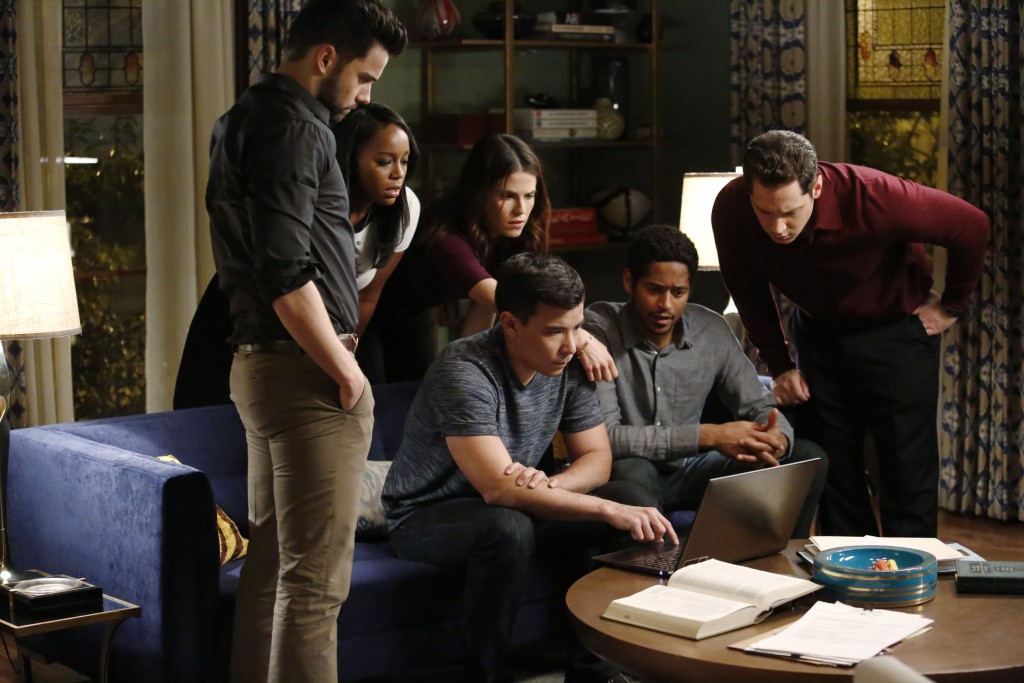 We also saw Oliver (Conrad Ricamora) secretly turn down Connor’s (Jack Falahee) acceptance to Stanford. What does that mean for their relationship going forward?
I think they’re really getting to know who they are as people. They’re really young to be in such a serious relationship, especially with all the major bouts of stress this season. We’ll see what happens there—if that’s something Connor can understand or wants to understand. It’s complicated, and that’s what I love about it.

After hanging with Annalise and the murderous gang this season, sweet Oliver seems to be moving towards the dark side.
And I get it. I get wanting to hang out with the bad kids and go to the smoking tree. [laughs] Oliver had a major life event happen to him when he was diagnosed as [HIV] positive, and I think it’s making him reassess how he wants to live his life. He doesn’t want to be boring basically. Whether that’s healthy or not, I won’t say. But I get it.

Michaela (Aja Naomi King) and Asher (Matt McGorry) got hot and heavy again after first hooking up last week. Why did you decide to put that unlikely pair together?
It’s always been my goal to explore who Michaela really is at heart. We don’t really know what her family life was like growing up, and she’s been through so much and just deserves to have some fun. That was what that scene in the bathroom [last week] was about. I think she’s empowered and letting down her hair and maybe trying to be less hard on herself, so that’s something Asher kind of brings. No matter what, Asher really loves women and he’s really good to the women he’s with. I don’t know whether [the hookup] was a good decision or a drunk decision, but they clearly have some physical chemistry. We’ll see what happens. The thing about this group is they don’t have anyone else. So healthy or not, I think you sometimes just have to lean in to the weirdoes you’re stuck with. [Laughs]

At this point, what else can you say about next season?
What I’ve really been excited about, just in experimenting with this season, is exploring the different character dynamics. We have all these amazing actors, and I just want to continue to let them have scenes that breathe and that let us really get to know them and their backstories. We’ve only scratched the surface. That’s very broad, but that’s kind of all I know at this point. Obviously, we’re never not gonna have our twists and turns and mysteries, but I’m excited to lean into the quiet character dynamics, as well as the OMG moments.

How to Get Away With Murder will return for Season 3.