How CBS Colorized the ‘I Love Lucy Funny Money Special’

Need a boost after filing your tax return?

CBS suggests two newly colorized (and money-themed) episodes of I Love Lucy from 1954 to take away the pain. We wanted to learn how the original black-and-white comedy is transformed. Turns out, the process is easier to understand than the IRS code! “It’s all about being true and respectful to the time period,” says CBS home entertainment exec Ken Ross. “The only reason I Love Lucy wasn’t shot in color is because the technology didn’t exist then. The colorization is so much better than it was 25 years ago. We can make it look like it was shot in 2019.”

Ross and his team begin by doing two to four weeks of research to identify original colors of costumes, sets, and props. Sources include an avid Los Angeles–based collector of Lucy memorabilia; anecdotal information from former Lucy staffers; vintage images of, for example, kitchen gadgets; and, in the case of Lucy’s dress in “The Million Dollar Idea,” a 1954 issue of TV Guide Magazine in which she and husband Desi Arnaz appeared (above). 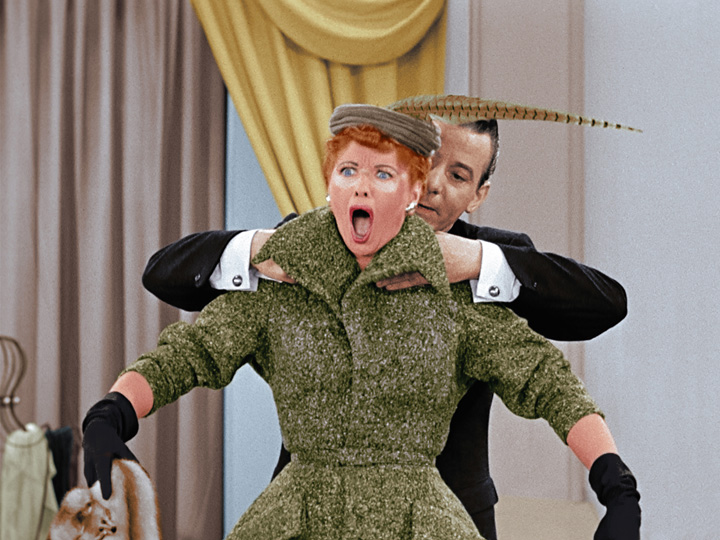 From 'I Love Lucy' to '30 Rock', Check out These LOL Holiday Episodes

The results go to industry leader West Wing Studios, which chooses representative frames and applies the selected hues. After some back-and-forth, CBS approves the final palette, and technicians step in for the 45- to 60-day colorizing process.

First, they create a “matte” for each layer of a scene — from a wall in the background all the way up to, oh, a coffee cup in the foreground. Proprietary software combines the layers into one seamless image. When images of a shot’s first and last frame are input, the program applies the color to the motion in between. And voilà: the ’50s in vivid color!

One particular source of pride for Ross in Friday’s “Idea” and “Bonus Bucks” episodes? Lucy’s signature red hair. “We finally got the coppery shade we wanted!”