[WARNING: This contains major spoilers for The Walking Dead Season 9 Episode 15, “The Calm Before.”]

Now, we’re not saying that other characters on TWD haven’t gone through a lot, but it seems Carol Peletier (Melissa McBride), more than any of the other survivors, has become trapped in an unending cycle of soul-crushing devastation. The Kingdom's Fair Turns Deadly on 'The Walking Dead' (RECAP)

Many goodbyes are said this episode... and for some unlucky characters, they prove to be final.

When she isn’t suffering, she’s stagnant. Before her horrible loss in “The Calm Before,” she’d been doing… well, not much. Carol spent most of Season 9 at the Kingdom, away from the primary action and conflict of the show. Before that she spent large stretches of time supporting others or living by herself, largely isolated from the show’s main storylines.

We’re breaking down some of the ways Carol has lost and suffered more than many of her fellow survivors, and some of the ways we’d like to see her story told differently when Season 10 rolls around. Though other characters have lost loved ones — many have even lost multiple loved ones — Carol’s the only one to lose multiple kids since her introduction in Season 1. This pattern started in Season 2 with the death of her daughter, Sophia (Madison Lintz), then went on to recur in Season 4 with Lizzie (Brighton Sharbino) and Mika Samuels (Kyla Kenedy), in Season 6 with Sam Anderson (Major Dodson), and now, in Season 9, with Henry (Macsen Lintz).

Carol’s horrible luck with kids has become something of a joke among fans — scan any comments section and you’re all but guaranteed to find a “don’t let Carol adopt Judith!” quip — but there’s something lazy about constantly giving Carol new kids, making her care about them and killing them off. The loss of a child and/or the guilt that comes with it can’t be the only motivation for her character, but throughout TWD’s last few seasons, it has been one of the most utilized storytelling devices where she’s concerned.

There have to be alternatives to this same exhausting cycle, and watching Carol adopt and care for a child only to see her suffer through his or her brutal demise borders on cruelty. She Loses People, She Loses Herself

Carol was also stuck in another repetitive, tired cycle for several of the past few seasons; the cycle of losing herself. Since the show never allowed her to open up about what happened with Lizzie and Mika and the other traumas she endured, for much of those seasons Carol existed as a shell of herself. For much of Season 7, she withdrew from her family and friends and sat, isolated, in a cabin outside the Kingdom. She played a part in the war in Season 8, but quite a bit of her core storyline was centered around Ezekiel, Morgan and Henry rather than fighting back against the Saviors. (Many fans were looking forward to a Carol vs. Negan confrontation. They’re still waiting.) 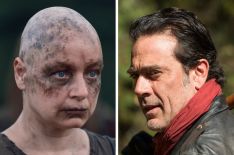 Until Season 9, much of Carol’s story was predicated on her pain — she could hardly deal with who she had to become to survive, so she invented alternate personas to serve a purpose and mask her suffering; then, when that didn’t work, conflicts escalated and she became totally broken, she simply left the group.

A better route for her story to travel might have seen her opening up about what she’d had to do to a friend or confidant — maybe Daryl, who certainly would’ve understood why she did what she did, or Michonne, who’d lost a child and understood that pain. At least she was able to talk with Maggie and Michonne this season, which is undoubtedly a step in the right direction. While Season 9 has definitely seen some improvements in Carol’s story (at least her purpose as a character wasn’t to suffer), there have also been setbacks. It was nice to see her finding happiness with King Ezekiel, but the fact that their relationship evolved over multiple time jumps made it hard to invest in them. It seems viewers were told rather than shown how much they care for each other, which made Ezekiel’s proposal in the season premiere feel a little jarring. DVR Cut Off? How to Watch 'Walking Dead's Full 'The Calm Before' Episode

Without spoilers, we're showing you how to watch if you were one of the unlucky fans to miss the final minutes of Episode 15.

Moreover, marrying Carol to The King produced an unfortunate side effect: it kept her at the Kingdom and away from much of the season’s primary action and the rest of the Alexandria and Hilltop groups. While Hilltop and Alexandria were interacting with the Whisperers and discovering Alpha and protecting Lydia, the Kingdom was… preparing for the fair? Trying to procure a projector bulb? Fixing broken pipes? With all of this said, it’s looking likely that Carol will have a greater role in Season 10. Henry’s death will certainly inspire her to avenge him and lead the fight against Alpha — and if Carol’s absolute decimation of the Terminus compound and her burning Jed and his Savior pals alive is any indication, Lydia’s mom should be very concerned about who’s coming her way.

It’s exciting that Carol will get to go to war and perhaps even be “Rick” to Alpha’s “Negan,” but it’s a bummer that it’s taken several seasons to circle back to a storyline where a character as dynamic and compelling as her will serve a dominant narrative purpose. This isn’t to say she should be the only important character; TWD is an ensemble cast now more than ever, and each person should have a part to play in the upcoming battle. What hints about the Season 9 finale are revealed?

But with Danai Gurira set to leave and no word on Lauren Cohan’s return, Melissa McBride is one of two remaining cast members from the first few seasons. Carol and Daryl will be the “Atlanta Two”: the final two survivors from the original Atlanta camp. It’s time for the show to stop killing Carol’s kids, torturing her or putting her in the background. She deserves better than that — and hopefully, in Season 10, she’ll have a story worthy of her badassery and importance.