‘The Big Bang Theory’: How Mark Hamill Came to Play Himself in the Season Finale

[Spoiler Alert: Do not read ahead unless you’ve watched the season finale of The Big Bang Theory. Major spoilers discussed ahead.

And that’s a wrap on Season 11 of The Big Bang Theory and the long-awaited wedding of Sheldon Cooper (Jim Parsons) and Amy Farrah Fowler (Mayim Bialik).

While there was no big event (except some string theory work) to stop the wedding from happening, there was a lot going on in the episode. Big guest stars like Mark Hamill, Kathy Bates, Jerry O’Connell, Laurie Metcalfe, Wil Wheaton, and Teller worked beautifully, and the wedding itself was filled with sweet, sincere vows from the newly married couple.

From their first kiss to the proposal.

But how much work went into planning such a big television wedding? Did they take inspiration from previous weddings, like Howard (Simon Helberg) and Bernadette (Melissa Rauch) or Leonard (Johnny Galecki) and Penny (Kaley Cuoco)? And how the heck did one particular Star Wars legend come to play himself? Executive Producer Steve Holland,clued us in on everything.

Did you learn anything from doing the wedding the year before with Penny and Leonard that helped you with this one?

Steve Holland: A little bit but then it also sort of boxes you in because you have to try to not repeat yourself. We knew that this was a chance to bring in lots of family. We knew that there are lots of people we wanted involved in the wedding, and then it became like a little bit of a juggling act. Like how do we make sure everyone has something great to do and how do we make sure we don’t lose the Sheldon and Amy of it in the midst of all this chaos?

How did you and the writers come up with the final episode and all the various pieces of it?

Holland: We knew this season we were building up to the wedding. I had the thought fairly early on that Sheldon might have his big breakthrough at the wedding and I think actually Chuck [Lorre, co-creator] had pitched that maybe he and Amy did it together, which seemed like a really great thing that they were joining their brains together in this theory and they were joining their lives together. So that really fell into place nicely.

We also knew that we were going to get the chance to bring all these family members in, and when you bring them all in — especially when you cast the amazing people we cast — you can’t just have them sitting around watching a wedding. You have to find things for them to do. So then it became piecing out what all these stories were and how to thread all these stories through. How to give all these stories a share of their own time and space. This season, I’ve marveled at just how much Sheldon has progressed with his emotions. As writers, do you still find yourselves going, ‘Wow! Look at how far he’s come?’ There was a time he couldn’t really hug people without cringing.

Holland: All the time. There was just an episode where he goes and hugs Amy this season, just sort of casually. We were like, ‘Wow, that’s such an interesting thing.’ It’s been a slow build and it seemed right that he would do it. But six years ago, he wouldn’t have done it. Five years ago, he wouldn’t have done it, and we even got to play with that a little bit this season.

We did an episode about Bitcoin where half of it took place in the present and then half of it took place in the flashback seven years ago. It was a really fun way for us to show characters and how they’ve grown and changed and go back and write them as their seven-years-ago selves. And it’s been such a slow thing that I don’t think you really notice it all the time until you go back and look at the early seasons, and you’re like, ‘Wow, they’ve really grown enormously.’

During the episode, Amy says something and Sheldon says, ‘I love you so much.’ That line was perfect!

Holland: I love that. He says, ‘I love you so damn much.’ When Chuck first read the script, he loved that line, but he was like, ‘Is it weird for Sheldon to say damn?’ and I said, ‘It is weird, but it feels right to us because it seems so out of place.’ And he was like, ‘You’re right, let’s hear it. Let’s hear how it sounds.’ And then at the table read when he did it, we were like, ‘Yup, that’s exactly the right line.’ 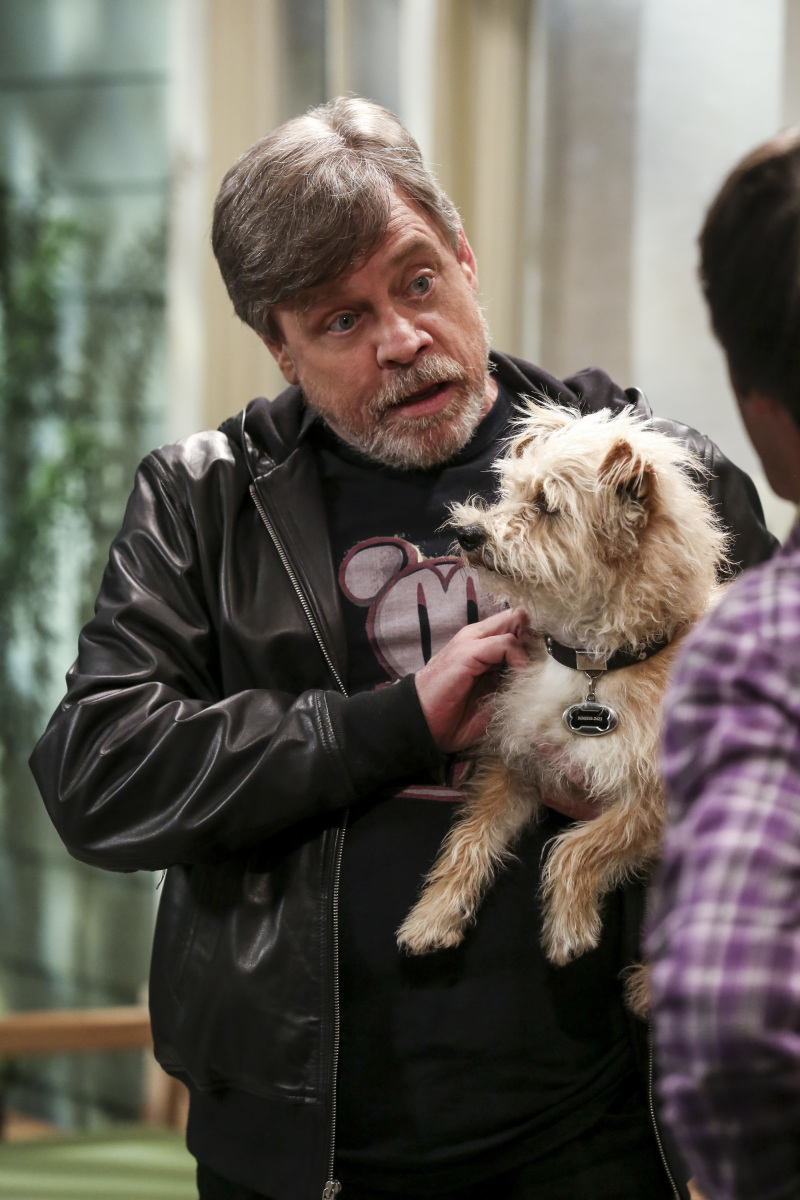 Mark Hamill playing himself on the season finale.

Was Mark Hamill a tough get for this or not so much?

Holland: I’m a gigantic Star Wars fan so we reached out to him, and we didn’t know whether he would be interested, whether he knew the show, whether he liked the show. And at that point, we didn’t have a script, which always makes things difficult because we’re always understandably hesitant to commit to a thing without seeing a script. He came and sat down and we had a really good time together. I think he got a sense that we knew what we were doing and that he could sort of take a bit of a leap of faith and trust that we would write him a good role.

During the finale taping, he came over and told me he had pitched having him play a Mark Hamill look-alike character. Was there ever talk of him playing a character or was he always going to play himself?

Holland: We always wanted him to play himself. A lot of actors don’t like playing themselves for a couple reasons. I think it gets them in their own head about, ‘Wait, how do I act?’ and I think also then they start to feel a weight of responsibility for every line their saying that people are going to think this is actually them. So I think that was one of his concerns early on, too. But we told him we’ve done this with a lot of guest stars before — including Carrie Fisher and James Earl Jones and Stephen Hawking — where we’ve written them as versions of themselves. And so, ultimately, he took a chance on us.

Do we know if he really has a dog in real life?

Holland: When I was calling him to talk about the episode, we got on the phone, and they were like, ‘Actually, he’s going to have to call you back in five minutes. He has to go bring his dog in.’ We’re like, ‘He has dogs, great!’

How did Kathy Bates and Teller come to be Amy’s parents? They were perfect!

Holland: Chuck had a relationship with Kathy Bates (from NBC series Harry’s Law) so he reached out to her. I think she was even in New York at the time but she jumped at the chance, which was incredibly lucky for us. It seemed like we wrote that role for Teller but we didn’t. We just wrote the role, and then one of the writers, Jeremy Howe, had pitched, ‘This would be really funny for Teller,’ because part of the bit is that he never gets to speak. We reached out to Teller, who we’ve met before and is a fan of the show.

Get a first look at the nuptials, as well as some of the many guest stars in the finale.

This was the episode where a lot of the Young Sheldon–ness came in because of Jerry O’Connell as the grown-up Georgie and the really sweet moment where Mary acknowledges George’s absence from the wedding. For viewers of YS, you can’t not think of Lance Barber (who plays George on the prequel) when she says those words!

Holland: Absolutely. And we talked about it a lot and, obviously, we work closely together with them. But it seemed like a really nice moment to reference his dad in a positive way, which is not always the way that he refers to him and to refer to his absence.

Holland: It seems like those are fun opportunities. We haven’t talked about it specifically and I think this season especially they wanted to get Young Sheldon up and running and make sure it had it’s own individual identity, which I think it does. And certainly there are little references like things people wouldn’t notice.

We did an episode early on this season where Sheldon and Howard were going to go shoot model rockets off in the desert. And when Howard’s showing him his rockets in the garage, Sheldon points at one and is like, ‘Oh I had that one. I burned down my garage with that one.’ And there was an episode of Young Sheldon, the first or second episode of the season, where he is playing with model rockets. We made sure it is the same rocket that he was using in Young Sheldon. So there’s been a few little Easter eggs like that.

The Big Bang Theory will return for season 12 this fall on CBS.