‘Sharknado 3: Oh Hell No!’ Continues the Wet and Wild Ride in D.C.

Stomp aside, Indominus Rex. Jurassic World’s designer dino has nothing on the true king of hybrid menaces: the improbable and seemingly unstoppable mash-up of disaster movies and apex predators known as Sharknado. And with Sharknado 3: Oh Hell No!, the third blast of shark-infested high winds and higher camp, they’ve gone and gotten a much bigger boat.

“It’s so strange: We’re a little TV movie, and everyone is treating it like a huge summer blockbuster,” marvels Anthony C. Ferrante, the trilogy’s director, still stunned at the franchise’s ferocious success. He’s not alone. Almost everyone involved in 2013’s original Sharknado was awash in disbelief when the masses devoured the cheapo flick, which saw Los Angeles being assaulted by a cheesy, shark-tossing tornado. “I never thought the movie would even see the light of day,” confesses Ian Ziering, whose heroic ex-surfer and pun-fully named Fin Shepard has since become the series’ Bruce Willis of murderous makos. “I assumed it would come and go.” “When I read the script, I was laughing so hard,” echoes Tara Reid, who stars as Fin’s wife, April Wexler. “It was like, ‘You gotta be kidding me.’ It was the silliest movie I have ever read.” And that was before the LOL-worthy title even happened. “Originally, Ian and I signed on when it was called Dark Skies,” Reid reveals. “Then in the first week of filming they changed the name to Sharknado, and we were both like, ‘Nooo! You can’t call it that!’ But they said to trust them, and it turns out Syfy, Anthony and the producers knew what they were doing.”

Initially, the ratings for the first airing of Sharknado “were good but not great,” recalls Syfy’s Chris Regina, the senior vice president of program strategy who oversees the network’s original movies. But a groundswell of online attention proved there was definitely blood in the water. The key was simply baiting more viewers. “So we added additional airings because of the buzz we were getting, and it exploded.” Tara Reid as April Wexler, Bo Derek as May

Riding the tide of those encore presentations and the WTF fascination of social media (even Mia Farrow live-tweeted), Ferrante’s “little TV movie” suddenly became the biggest splash of that summer, leading to theatrical showings, late-night talk-show jokes, and the kind of media hype usually reserved for feature-film epics. “The first movie had very little marketing. They treated it like the regular Syfy TV movie, and there is nothing wrong with that,” Ferrante says. “Then it began gaining traction, and it blew up on the re-airings, it blew up Twitter. The thing that’s wonderful about the first Sharknado is that people found us; we didn’t force people to watch it. That is what makes it special.”

It’s also what made 2014’s sequel a no-brainer. “We had all the ingredients that we knew had made the movie a success,” offers Regina, adding that recapturing TV’s weirdest lightning in a bottle meant mixing more juice into the recipe. Sharknado 2: The Second One boasted a bigger budget, better effects and a move to the Big Apple, where the newly reunited Fin and April battled both another storm and monster expectations. Wisely, Syfy went hard with the marketing, complete with a branded presence at Comic-Con in San Diego, which helped turn last summer’s brilliantly absurd follow-up into the network’s most-watched original movie ever, with 3.9 million viewers. And again, jaws hit the ground as fast as the film’s exploding shark parts. “I thought we’d maybe get close to the numbers we did on the first one,” admits Ferrante. “I didn’t expect this to blow up a second time. Now, to be sitting here two and a half years after we shot the first movie with a TV Guide Magazine cover and a third movie where we have spanned multiple states? It’s pretty incredible.” For Oh Hell No!, the whole gang—Ferrante, Ziering, Reid and the trilogy’s screenwriter, Thunder Levin—reconvened on the East Coast for a shoot that lasted less than three weeks, and this time, the forecast called for more madness than ever. “When we were developing this one, people were saying that they weren’t sure how we could top the second one. It was so jam-packed with stuff,” Ferrante says. “And I would say I don’t know how we can top this one. There are literally ideas for four Sharknado movies crammed into one film…and it works!”

Opening in Washington, D.C., with Fin preparing to receive the Medal of Freedom from the president (played by Mark Cuban, of Shark Tank, natch) for saving L.A. and New York, No. 3 benefited from being part of a national treasure in its own right. With the Sharknado brand so amusingly beloved, production was able to secure clearance to shoot all around the capital, lending a level of authenticity to the most unrealistic film since, well, No. 2. “We had access to some incredible places,” raves Ziering of filming at the Washington Monument and outside 1600 Pennsylvania Ave. “When you’re part of a megahit, apparently people are happy to open their doors and work with you.” Before you can say “Beltway,” however, Fin’s celebration with the commander in chief turns cataclysmic after a massive new sharknado develops over the city, triggering a sequence Ferrante calls “White House Down with sharks—the metaphor there is that they’re terrorists,” he explains, giddily recounting how this bit allowed for a dose of amped-up, military-style action. “This story gave us a chance to have a gun-toting president, and Ian has a machine gun. It gave us the opportunity to do something we haven’t done before in these movies.”

Another first for the franchise is filming in multiple locales. With the entire Eastern seaboard under attack by sharknado cells (damn you, global warming!), Oh Hell No! goes on a road trip as Fin races to Florida, where the now-pregnant April; their daughter, Claudia (Ryan Newman); and April’s mom, May (Bo Derek), are celebrating Claudia’s 18th birthday. As with Washington, Ferrante and company were granted carte blanche to shoot extensively at Universal Studios, Orlando. Yes, there are sharks in the park. Chris Jericho, who plays Bruce, the Universal Studios Orlando ride attendant. “Universal Orlando was so generous,” Ferrante says. “They said, ‘As long as it’s sharks and a tornado doing the damage, you can do whatever you want in the park.'”

“Sharknadoes tend to follow us everywhere, if you haven’t noticed,” laughs Reid, whose character now sports what Ziering jokingly calls a “go-go gadget” prosthetic, having lost her hand to a midair shark attack in The Second One. “So it makes perfect sense that another one would start where my husband is, then come to me!”

Just as in the previous outings, this wild ride is filled with blood and guts and goofy deaths. “We do a little more evisceration in this one,” previews Ferrante. “There is a great, amazing kill that is prolonged and agonizing for the character. But it’s really cool. We do some horrible things to the victims.” There’s also a flood of celebrity cameos, including retired L.A. Laker Rick Fox, Playboy models Holly Madison and Kendra Wilkinson, magicians Penn and Teller, NYSNC-er Chris Kirkpatrick, WWE star Chris Jericho and talk-show host Jerry Springer. Along the way, Malcolm in the Middle’s Frankie Muniz turns up as a storm chaser working with the original film’s Nova Clarke (Cassie Scerbo, reprising her role), and, in keeping with the franchise’s family-first theme, slow-motion beach icon David Hasselhoff surfaces as Fin’s father, Gil, a former astronaut whose NASA connections could help save the world. How, exactly, we can’t even begin to explain.

“[The whole thing] is tongue-in-cheek!” Ziering says, as if anyone needs reminding that the fate of mankind is in the hands of a Baywatcher and a teen idol turned Chippendale. “It is preposterous. There are sharks in tornadoes! It’s so far-fetched, you can only suspend disbelief to enjoy it.” And that is exactly why we love this series so much and why everyone from Syfy to Ferrante to the stars are banking on endless summers of sharknadoes. “So much of the film is a social experience with the fans, and that really helps educate us,” Regina says of gauging the potential for a fourth movie. “I have an idea of where we can go in the next movie, but they could be demanding something else after this that could change my mind.”

One mind that won’t be swayed is Ziering’s. He’s hooked, wherever the next one may be headed. “I would love to be a part of this project for many years to come,” the actor says. “It’s entertainment, and I’m having fun at the same time. So why get off a boat that isn’t sinking?” 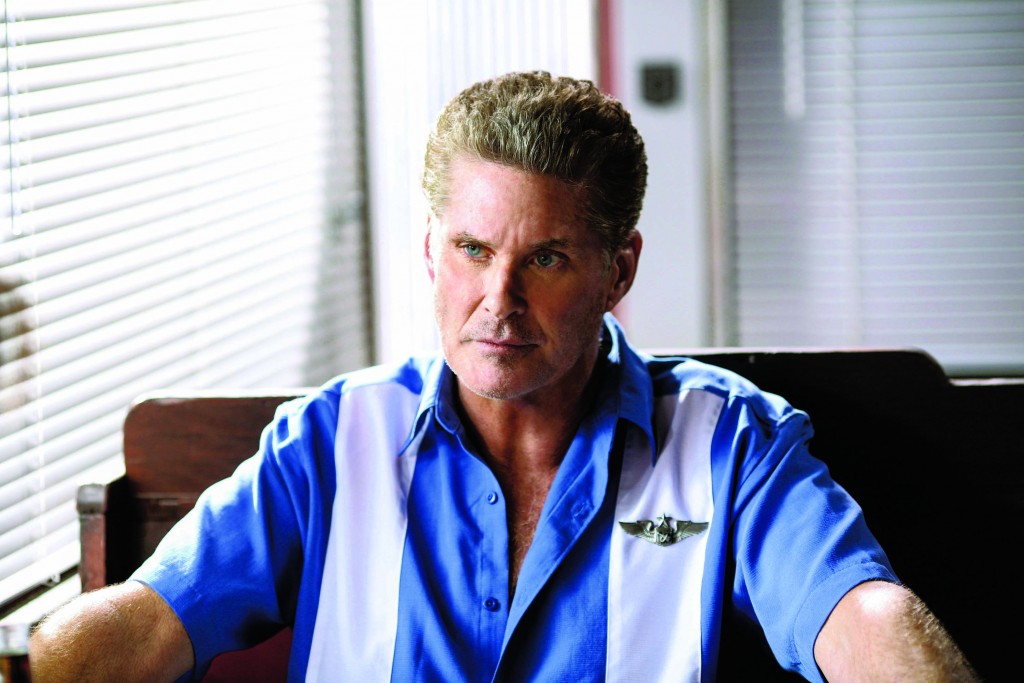 (Did you know? Bo Derek took the cast photographs of Ziering and Reid for TV Guide Magazine‘s cover! See the image at the top of this article.)

Catch the Sharknado 3 panel at Comic-Con on Friday.

Sharknado 3: Oh Hell No! where to stream