“Sometimes change is everything,” Dr. Meredith Grey (Ellen Pompeo, who’s also an executive producer) says in the new promo for her final episode of Grey’s Anatomy. Soon, it will be time to see if change is good for the ABC medical drama.

Pompeo, who has starred on the series since the beginning, has only a limited presence in Season 19 (eight episodes), and Grey Sloan Memorial will be saying goodbye to Meredith as she heads off to Boston with her kids in the February 23 winter premiere, “I’ll Follow the Sun.” The promo, fittingly, offers a look at her past and present.

“This is where I learned to be a doctor. This is the place where I found my family, the place where I fell in love,” Meredith says in a voiceover as we see clips of her at work, with her “person” Cristina (Sandra Oh), her sisters Maggie (Kelly McCreary) and Amelia (Caterina Scorsone), and her late husband Derek (Patrick Dempsey). As Richard (James Pickens Jr.) puts it, “there’s no one like her.” And so her friends and colleagues want to celebrate her on her last day, even as she points out, “you know I’ll probably be here next week.” Watch the promo, which aptly features “Chasing Cars” (heard several times on the show, including in the musical episode), above. 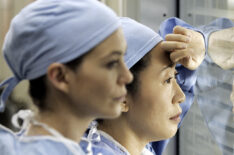 In “I’ll Follow the Sun,” it’s Meredith’s last day at Grey Sloan Memorial and the doctors plan a goodbye surprise, while Nick (Scott Speedman) confronts her about the future of their relationship. Elsewhere, the interns compete to scrub in on Maggie and Winston’s (Anthony Hill) groundbreaking partial heart transplant procedure, and Richard asks Teddy (Kim Raver) an important question. It was written by Krista Vernoff and directed by Debbie Allen.