You can’t keep a good captain down, at least as far as Captain Lee Rosbach is concerned, as the popular reality star is set to return to Bravo‘s Below Deck before Season 10 is over.

Monday’s (December 19) episode saw Rosbach taking an early exit from the season due to nerve damage in his left leg. “My injury, it’s getting worse. The left side of my body, I don’t feel anything,” he revealed in last week’s episode before gathering his crew to announce his departure.

“As you guys know, I’ve been struggling with my mobility, and it’s been hard,” he told his fellow crew members. “And I’ve let you guys down, and for that, I apologize. So I’ve made a decision to leave the boat.”

Below Deck Mediterranean‘s Captain Sandy Yawn stepped in to relieve Rosbach on Monday’s episode. But the longtime yacht captain said he intends to be back before the season is done.

“I made a promise to the crew before I left that I would be back before they were done, before the season was over, and I would walk on board by myself unassisted,” Rosbach told People. “I’m happy to say that I was able to fulfill the promise.”

“That was a very proud moment for me,” he continued. “I wanted to be able to finish what I started.”

On Monday’s episode, Rosbach announced to his teary-eyed crew, “I finally gave myself a plane ticket home, but it’s round trip. I’m going to go back to the States, get this straightened out, and as soon as I do, I’ll be on the first plane back here and tell whoever’s on board to get the f*** off my boat.”

Rosbach told People that walking away wasn’t an easy decision. “That’s something I’ve never done in my life,” he shared. “I’ve never quit. I’ve never had to say I quit. And it was really, really hard to admit, especially to myself, that there’s something out there that kicked my ass. That was a hard pill to swallow.” 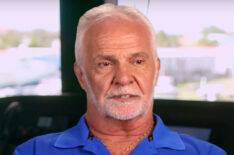 After months of physical therapy and at-home sessions with a massage therapist and a clinician, Rosbach says he was ready to return to work.

“The outpouring of sympathy was just overwhelming,” Rosbach stated. “I don’t consider myself a celebrity or a reality TV star. I’m just a captain that does this job, happens to get filmed while I’m doing it. And then when something like that happens, and you see the reaction to the fans, you realize the responsibility you have and how many people’s lives you actually touch in a great way. So it’s humbling, to say the least.”

“But I’m still here,” he quipped. “It’s going to take more than that to stop me.”