The Addams Family is back and putting Wednesday in the spotlight with Netflix‘s new series arriving just in time for a Thanksgiving Day binge fest with family and friends.

From the mind of Tim Burton, Wednesday is an eight-episode series dropping November 23 with Jenna Ortega (Scream, You) stepping into the titular role as the Addams family’s iconic daughter. Ahead of the premiere, Ortega, her costars Luis Guzmán and Gwendoline Christie, and showrunners Miles Millar and Al Gough stopped by TV Guide Magazine and TV Insider’s New York Comic Con studio to preview the show. “I’ve never played someone who’s been done before in previous iterations,” Ortega says of taking on the role made famous over the years through pop culture. “And that’s definitely scary because I know a lot of people, especially when the nostalgia factor comes into play, it adds a lot of pressure to something that should be fun and lighthearted.”

Even with that pressure, Ortega was up to the challenge, adding, “I think what was really important to me, or the thing about Wednesday is, yes, while she’s deadpan, she’s expressionless, I feel there’s several routes you could have taken to give a performance that is still somewhat accurate to hers. And we kind of tried everything that we could and played a little bit for sure. But then at some point you just kind of have to hop on a train and run with it.” 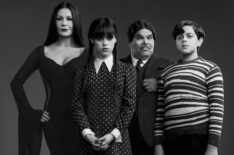 Everything We Learned at the 'Wednesday' NYCC Panel

That being said, Ortega adds, “The last thing I wanna do is knock off somebody else’s work or feel like I’m mooching off of somebody else’s brilliance. I really did try to do something a bit different with her and still try to remain truthful to her.”

See what else Ortega, Guzman, Christie, Millar, and Gough had to share in the full video interview, above, and don’t miss Wednesday when it premieres on Netflix.