Famed film director Quentin Tarantino is making plans to jump to the small screen as he shared plans for a new TV series.

The man known for titles such as Pulp Fiction, Once Upon a Time in Hollywood, and Reservoir Dogs teased his project Wednesday, November 16 during an event in New York City surrounding the release of his new book Cinema Speculation. Hosted by Elvis Mitchell (Is That Black Enough for You?), TV Insider was on site for the conversation during which Tarantino let it spill that he’s working on an eight-episode series tentatively set to shoot in 2023.

He wouldn’t add any additional details, keeping mum about the topic beyond the very revealing tease. Meaning, it’s unclear if he’d be directing, writing, or producing, or doing all three. Despite being best known for his films, Tarantino’s no stranger to television as he famously directed an episode of ER during the height of its fan fervor. Throughout the years, he’s also directed an episode of Jimmy Kimmel Live and two installments of the original CSI: Crime Scene Investigation. There was also speculation earlier this year that Tarantino may helm a few episodes of FX‘s Justified revival once again starring Timothy Olyphant, although no confirmations have been made.

Along with unveiling his plans for a series, the director teased that he’d also written a play before the release of his most recent film, Once Upon a Time in Hollywood. Like the television show, Tarantino didn’t elaborate on what the play was about, but it’s clear he’s been busy behind the scenes. 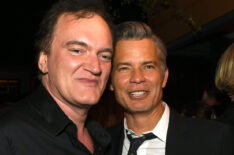 During the conversation, Tarantino was asked by Mitchell about Marvel, a seemingly go-to topic among Oscar-nominated directors as of late. While he said he’d never direct a film, he didn’t bash them either, noting that if he could helm a story from the comic lineup it would be Sgt. Fury and His Howling Commandos. Of course, Sgt. Fury is the character Nick Fury, who is portrayed by a Tarantino mainstay, Samuel L. Jackson, in the MCU.

Stay tuned for possible developments on Tarantino’s aforementioned TV series, and pick up his book Cinema Speculation in stores and online now.