‘Home Economics’: Casey Wilson Talks Fitting in With the Hayworths at Thanksgiving Dinner

This Thanksgiving, we’re grateful that Happy Endings alum Casey Wilson is bringing @HappyHarmony99 back to Home Economics tonight for the Hayworths’ turkey-day celebration.

Revealed in the comedy’s Halloween episode to be both an oddly enthusiastic fan of novelist Tom (Topher Grace) and the siblings’ half-sister, Wilson hints that the return of this “sociopath with a heart of gold” makes for a not-so-harmonious holiday. Especially since it’s the first time she meets her bio dad, Marshall (Phil Reeves, who also played Wilson’s pop on Black Monday), and the wife he cheated on, Muriel (Nora Dunn).

At first, the Hayworth siblings are concerned that Harmony won’t fit in at the dinner table. But then, “they come to realize that [she’s] a bit like each of them,” Wilson says. In addition, Marshall and Muriel appear to be infatuated with her! Might we see Harmony again? “I hope so,” Wilson says. “She could be back for Christmas!”

Here, our longtime favorite shares her memories of spending the holidays with the Hayworths and what she has learned from one of former costars about landing roles without trying too hard. Or really, at all.

OK, so I don’t think I have loved a show this much since Happy Endings.

Casey Wilson: Wait, are you serious? I did not know this!

They even have the same initials!

I loved doing it, and the cast is so great. I love Caitlin McGee … and Karla Souza? Oh my God, incredible. Incredible. And so deadpan. She has such an interesting rhythm in a great way where she says something that like, 10 actresses and we would all say it one way, and she says it a totally different way, which is just so great. I love it.

I know, I know. It was so fun. And you know, I’m always playing like a desperate sociopath. A sociopath with a heart of gold. [Laughs] 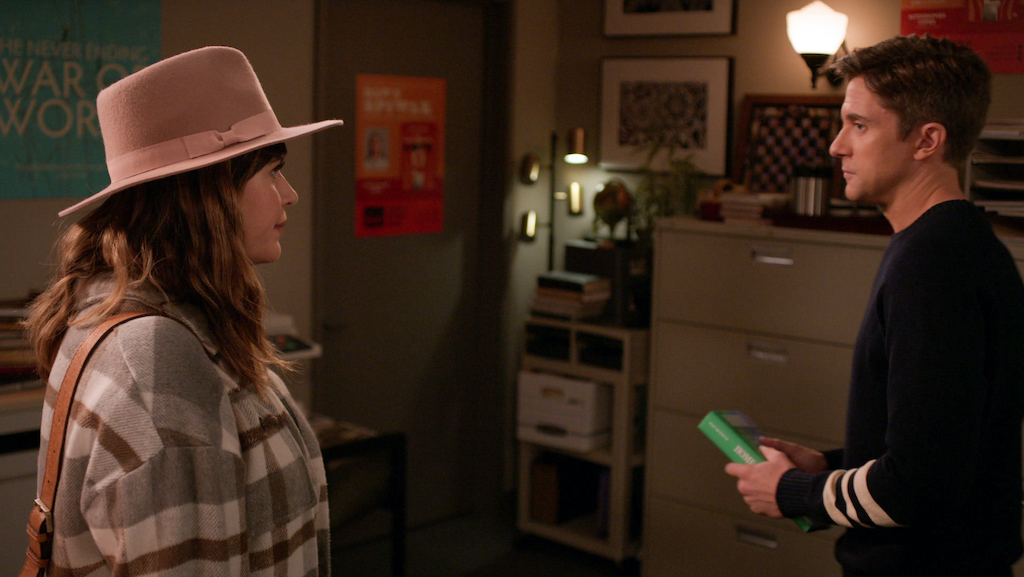 How does she end up at the Hayworths’ Thanksgiving table?

I end up back with them because I’m the new sibling and so now I’m gonna have dinner with them and kind of “meet the parents” — at least meet my dad, my real dad and she’s not my mom, so I guess my stepmom? The women he cheated with, Nora Dunn’s character.

So, you, Nora Dunn and Sasheer Zamata…it’s three generations of SNL.

Of course! And basically the Hayworth kids, the siblings, are upset because they have no idea if I would even fit in. And then they come to find that the parents enjoy being around me more than their own kids.

Because you probably give them attention.

I give them attention and I can do everything. It’s revealed that I am incredible at bird-calling, in the way that birds will actually fly up and land on me like I’m a strange kind of woodland creature. I have gifts that I’m ready to share that have not been seen before in that family. [Laughs]

Karla and Sasheer because they’re kind of the in-laws — they have such a great storyline — are basically calling themselves the normals and are trying to see if I’m normal like them, the outsiders, or if I’m just as crazy as the family. So they’re trying to pull me onto their side, thinking they’ve got me as a “normal.” Then all the siblings come to realize I’m a bit like each of them ultimately. Oh, we both like rock climbing and working out. [Laughs] And Jimmy Tatro is so good.

Oh my God. Yes, I know. I love him. He’s a doll. I’d met him a couple times before when he asked me to do it and I love him. He’s so good at that part. He’s so charming and like, you can make fun of his character, but he’s also lovable.

Now, how do they leave it? We’re hoping they keep Harmony as a member of the family.

I hope so, too. She’s certainly technically a sibling, you know? Harmony is full, full-blooded Hayworth. Born out of an affair, but still. [Laughs] So she could be back for Christmas.

If you’re available … it seems like you’re always working on something. You’re doing this, you have Bitch Sesh, your Real Housewives podcast with Danielle Schneider, who needs to do more TV. She is hilarious. And then you do panels and events — you and Danielle even did an event for the podcast. And of course, you have all of the Happy Endings folks to keep in touch with!

I do have a funny story. Maybe it’s not funny, but you’ll appreciate it. So Adam Pally was out here in L.A. a few months ago and he’s like, “Can I come over and will you put me on tape for an audition really quick?” And I’m like, “Yeah, no problem.”

Now, when I do my self-tape auditions, you know, I’m working on them for maybe five hours of prep, then I’m memorizing, then I’m getting in hair and makeup and then I’m putting myself on tape. A hundred tapes. I mean, it is a full day when I am done.


You have the backdrop. You’ve got the lighting.

Oh yeah. Lighting, a back-up mic, I’m editing, I’ve got fonts going, like it is a job. But Damian, I kid you not. He had me take my iPhone, prop it up on a fruit bowl in my kitchen and film him in front of my dish rack. It wasn’t even centered, you could see the sink and I think it even had dirty dishes.

I begged him, I begged him. I said, “Please, let’s go to, you know, like a flat background please.” And he just goes, “Nah, I’m good.” So I asked what the audition was, and he says the name of the show and that his scene is 12 pages. I go, “And you’re memorized, right?” And he’s like, “I’ve never read it.”

Cut to: We’re at a party like a month later and I’m complaining to our shared agent, like, “You really need to step it up with Adam. I mean this is crazy … the way he’s auditioning is crazy.” And he goes, “Oh, well, Adam’s filming that show right now.” He booked it! 'Happy Endings' Virtual Reunion: Who's Getting Married? Who's Lying? (VIDEO)

You have to be kidding me.

Yes. He’s booking things up when we did one take and he was reading the whole thing, script in hand! [Laughs] But he’s a brilliant performer and I mean, I’ve now learned a thing or two…

Yeah, next time, just phone it in.

Exactly. You know, just do it in the laundry, wherever. The kids’ drop-off at school. I will just hold the camera driving. [Laughs]

Well, in his defense, Adam has figured out how to go around the world drinking and smoking for a paycheck.