‘Grey’s Anatomy’: Harry Shum Jr. Says Blue’s Tragic Past Is About to Be Revealed

“He’s someone that loves a challenge, but at the same time, when that challenge is not him being#1, for him internally, that means the other interns can destroy his chances of moving ahead. In his eyes,” Shum adds, “the biggest threat is between Lucas [Niko Terho] and Mika [Midori Francis]. In this episode, we’ll see if he changes his mind.”

Until a tragic setback — to be revealed in the November 10 episode of Grey’s Anatomy — Blue led a charmed life, marked by the blue ribbons he won in academics and athletics (hence the nickname). Since then, he notes, “he’s put all relationships to the side and would do whatever it takes to climb back to the top.” Like his earlier lying to ensure getting into a big surgery “so he could be at least looked at as a No. 1.”

A decade older than his rivals, Blue demonstrates superb skills when a lightning storm fills the trauma center with burn patients in the episode. Their suffering prompts him to share his own pain with Jules Millin (Adelaide Kane), the fellow intern he casually slept with after their lusty sex ed presentation. “Blue’s definitely a flirt, but he’s getting a lot closer to her than he probably would have thought,” says the actor. Among his reveals: what happened between college and med school that caused his world to crumble. Teases Shum: “Once the emotions come out, he just turns into a puddle. That’s how I’m interpreting it.” 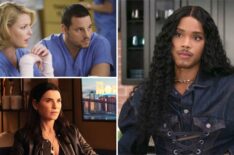 6 Spinoff Ideas for Shows (Maybe) in Their Final Seasons

Shum, who first won fans with his role as sexy dancer Mike Chang on Glee, cemented his base as Shadowhunters’ powerful bisexual warlock Magnus Bane. He’s now part of Grey Sloan’s new group of interns, harkening back to the venerable show’s early days when the newbie doctors had central roles in the medical drama. “It was so fun talking to kind of the O.G. cast,” says the actor. “Seeing us has been really bringing back memories for them — and for me as well. I watched Grey’s first season and it brings that feeling back that I remember I loved when I first watched it.”