‘Moonlighting’ Creator Hints at Big News — Is It Heading to Streaming?

Glenn Gordon Caron, the mastermind behind Moonlighting, took to Twitter on Monday to hint that he had some big news to announce related to the ’80s hit TV dramedy coming this Wednesday.

Caron writes, “Disney and I have put our heads together and come up with a plan.” Fans of the series, which starred Bruce Willis, Cybill Shepherd, Curtis Armstrong, and Allyce Beasley think the news may reveal that the ABC show will finally be available to stream, either on Hulu or Disney+. 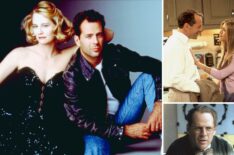 As The Wrap reports, Caron contacted Disney a while back about putting Moonlighting on the company’s then-upcoming, direct-to-consumer streaming platform, Disney+. Someone from the studio told him, “Well, we don’t see Disney+ that way” — an apparent reference to the show’s more PG-13 material not fitting with the family focus of the streamer’s content at the time of launch.

However, when Disney+ decided to add more mature content in recent months, Carson pressed them again about bringing back the series and Caron said he was told, “Look, the big problem we have is, the show is just larded with music. None of those rights have been sewn up, and we believe it would be cost prohibitive to go get them now.”

“We licensed stuff from the ’60s, ’70s, and ’80s, and also broke new music,” Caron said. “We were sort of all over the map, and actually sometimes used to philharmonic music – ‘The William Tell Overture’ or whatever worked the best.” The theme song was written and performed by Al Jarreau and produced by Chic mastermind Nile Rodgers.

Here’s hoping they have found a workaround and will be announcing Moonlighting and its 67 episodes will be streaming soon!