When Netflix‘s Blonde received an NC-17 rating, it initially caused shockwaves. It’s very rare for a movie to receive this rating — given to films with content the Motion Picture Academy finds to be “only suitable for ages 18 and older” — but after watching the fictionalized biopic of the late, great Marilyn Monroe (based on the acclaimed fictional Joyce Carol Oates novel), the rating makes perfect sense.

Andrew Dominik and star Ana de Armas (whose acting is truly impressive in this — she carries the entire thing) spoke out against the film’s rare rating, arguing it doesn’t present anything not already discussed in public discourse. Writer/director Dominik theorizes that an oral sex scene between de Armas’ Marilyn and Caspar Phillipson‘s JFK could be what landed them the rough rating, in part perhaps because of the way it depicts an American president.

“It’s hard to say, because they’re a lockbox, mate,” he told CinemaBlend’s ReelBlend podcast of MPA’s grade. “They don’t come back and… I mean, they give you sort of pointers as to what might be problematic, you know? Yeah, maybe. I mean, I think it’s got a lot to do with who’s in (the scene). But on the other hand, people do seem to be upset by the film or triggered by the film in some way. So maybe it’s more effective than I thought.” The JFK scene in Blonde is rather intense, but it’s far from the only alarming moment in the nearly three-hour movie. In the scene, Marilyn is flown in for a quicky with the president. In the car to his hotel room, she’s informed by Secret Service agents that she’ll be flying back home the same night. JFK is on the bed and taking a call when the actress arrives, and he instructs her to start performing masturbation on him, eventually pulling her head down by the neck to begin oral sex. Feeling clearly confused and degraded, Marilyn acquiesces, and the oral sex is shot from JFK’s POV. On top of it all, the shot is then imposed onto a movie screen in front of a crowded audience as de Armas narrates Marilyn’s mental gymnastics justifying the degradation.

Despite that shocking sequence of “events” (the JFK affair is still only rumor, though a popular one, so one cannot claim this sex scene is a truth that needed telling), there is no one scene that earns Blonde the NC-17 label. It’s a collection of relentlessly punishing moments and the manner in which they were filmed that, in my view, earned the label. Dominik believes Blonde should be heralded by supporters of the #MeToo movement.

“That was a bit of a surprise, that it got that rating,” he told The Playlist in May 2022. “It was really #MeToo that allowed Blonde to happen. It was a gold moment where you had to believe a woman’s perspective no matter what. Whereas before, I think people were really uncomfortable with how Blonde portrayed certain American sacred cows. And then it became a gold moment where it didn’t matter if they were sacred cows or not. And that’s why it got made, what allowed it to happen in the end.” 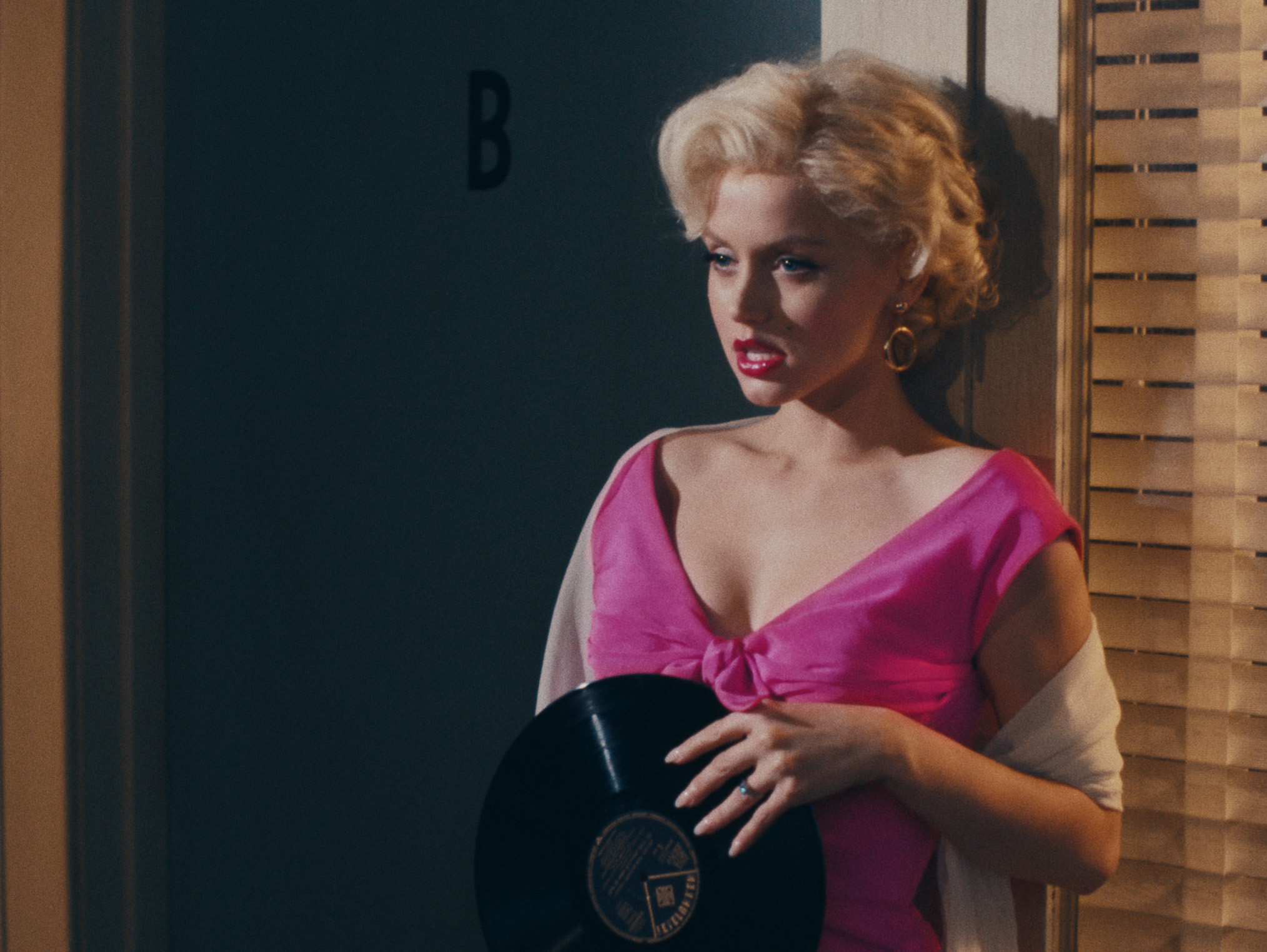 Again, much of what happens to Marilyn in Blonde is speculation within the real events of her life and the fictionalized ones portrayed in the Oates novel. (Note the wording “what happens to.” Blonde removes all sense of agency from the star who, unlike her depiction here, was intelligent, a savvy businesswoman, a civil rights advocate, and more. De Armas’ powerfully effective acting unearths Marilyn’s true on-screen talent.) Dominik chose to only display emotional and physical traumas she endured, and depicted them in unexplainably graphic ways.

Norma Jeane is sexually assaulted in a studio big wig’s office in the first hour. She’s miserable and spiraling in nearly every single scene (including the first half hour’s showcase of her traumatic childhood), with little to no respite for some realistic lightheartedness and joy. Near the end, there’s another POV shot from inside her vagina looking out, the circular shot opening like a camera shutter via a metal speculum. The light at the other end emanates from an operating room as a hoard of people peer into Norma Jeane’s privates during an abortion (come one, come all to witness Marilyn Monroe in the flesh!) She awakes the next morning drenched in blood. The invasiveness does nothing to justify its presence. It’s just perplexing and disquieting, not challenging or “brave.”

The film ends with her suicide, filmed in a way that feels like the camera has zero regard for her personhood. The intended effect was presumably to express that no one cared about Marilyn in her life. But this film seemingly cares only for her death. Allow this Q&A between Dominik and Sight and Sound illuminate things:

“I feel there are cultural repercussions to making certain choices in terms of how we present a figure from the past,” Sight and Sound‘s Christina Newland asked. “What does it say to an audience that we’re not seeing that she formed her own production company, or that she was involved in opposing the anti-communist witch-hunts by the House Un-American Activities Committee in the 1950s? Or that she fought against segregation on behalf of Ella Fitzgerald, and so on?”

As Dominik replied: “That stuff is not really what the film is about. It’s about a person who is going to be killing themself. So it’s trying to examine the reasons why they did that. It’s not looking at her lasting legacy. I mean, she’s not even terribly concerned with any of that stuff. If you look at Marilyn Monroe, she’s got everything that society tells us is desirable. She’s famous. She’s beautiful. She’s rich. If you look at the Instagram version of her life, she’s got it all. And she killed herself. Now, to me, that’s the most important thing. It’s not the rest. It’s not the moments of strength. OK, she wrested control away from the men at the studio, because, you know, women are just as powerful as men. But that’s really looking at it through a lens that’s not so interesting to me. I’m more interested in how she feels, I’m interested in what her emotional life was like.”

There is a bevy of evidence to support that Marilyn very much did care about her career and legacy. More than anything else, we know from her public comments and private journals that she deeply cared about being seen as a human being deserving of tender love and care. But according to Blonde, Marilyn’s emotional life was traumatic and nothing more, and depictions of anything but hardship are not interesting. Blonde is the latest egregious example of the American icon’s exploitation — the irony, of course, being that the film is seemingly meant to critique that exploitation itself.