Westworld‘s fourth season has come to an end and with it begins Dolores’ (Evan Rachel Wood) final game within the Sublime.

While the finale installment, “Que Será, Será,” seemed to close the door on the real world once ruled by humans and now overrun with Hale’s (Tessa Thompson) hosts, it feels as though there’s one final chapter to this complex sci-fi story. Offering some insight into some of Season 4’s biggest questions and answering lingering thoughts about a yet-to-be-announced potential fifth season, co-creator Lisa Joy is clarifying things for viewers. Westworld Season 4 concluded with the beginning of one final game in the Sublime, run by Dolores. She rebuilt the original park in this space, bringing us back to the beginning of everything. While no fifth season has been ordered, should there be more to the story, will it be the show’s final chapter?

Lisa Joy: Yeah, we’ve always known that the end would come after the end of the world and it’s now the end of the world, and we’re coming full circle to have Dolores, who was at the mercy of everyone else’s stories, finally tell her own story. And Westworld, the idea of loops and the loops we live in has been such a motif in this, that the idea to come full circle, and once again, have a Western, but this one dictated by Dolores or Christina or whatever she wants to call herself in this next life, that’s always been the hope. So we’ll see.

Is this last game for Dolores the hope that Bernard had envisioned for the future of their kind, or is it something yet to be discovered?

I think he realized that in every simulation, it always ends the same way, like he said, life on earth as we know it is over, it’s doomed. There’s going to be a blood bath. And so what he was looking for was any form of a coda that would be possible, a sort of escape hatch by which humanity might get one last chance. In the end, I think the escape hatch that he was trying to push everyone towards was the idea that despite the end of the world, Dolores might have one last world within her where there was still some hope. That’s a great question. I’m trying to figure out… if we get a fifth season, I don’t want to give spoilers. But the Sublime is a really interesting place wherein it’s its own bounded infinity. You can make as many worlds and run them as many times as you want and I think we’ll see what that world or worlds look like, maybe.

Dolores says towards the end of the episode that anything that can still be remembered by her may exist. Does that mean everyone will exist in her Sublime Westworld? There were quite a few seemingly final deaths…

It was a bloodbath. Yeah, life on Earth and those folks are dead. Crushed pearl, desperate AI. But yes, memory is its own way of keeping people alive, certainly metaphorically or within us and maybe technology allows for certain other things that we would have to get a fifth season to find out. I will say, that in a fifth season, you will not see everyone returning, but you will see some people and some familiar faces from long ago. Does that mean Maeve (Thandiwe Newton) and Teddy are among the existing figures/consciousness in the Sublime? Bernard particularly mentioned that Maeve was a copy in the real world.

Until finally he finds himself in that exact situation with the real Maeve on Earth and is hoping that his simulation holds and was an accurate representation of her. Of course, the one thing he doesn’t really account for is what he would do. Which is in the simulation she warned him, in a sense, or his version of her warned him, “Don’t tell me I’m not going to help you.” And despite that, he still admitted the truth to her and she still helped him. So even Bernard can be surprised. 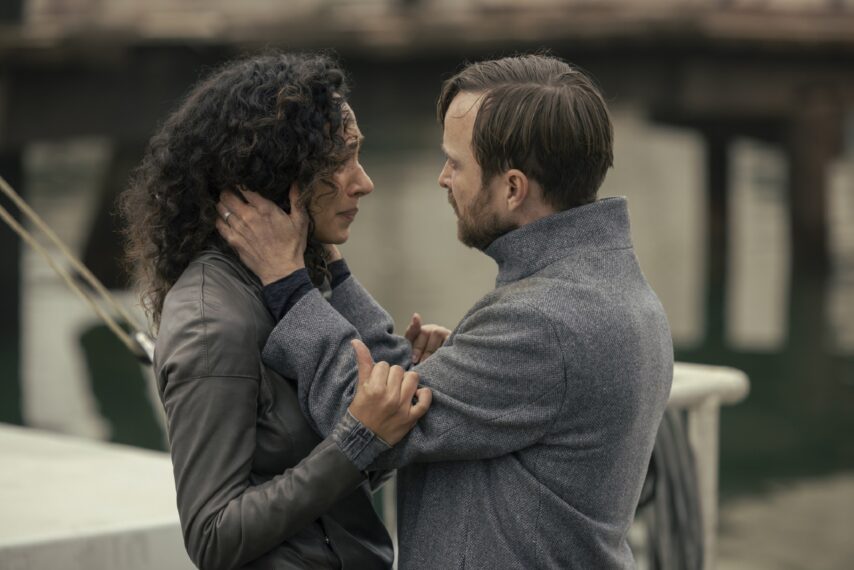 Caleb was left behind on the docks by Frankie (Aurora Perrineau). Is it really the last time we’ll see a version of him? He didn’t technically die onscreen.

We have these kinds of red pearl Calebs, as I call them, that are similar to the Delos experiment, the immortality experiment. And so, the problem with that experiment was every time they tried to hue a map of somebody’s consciousness to a physical artificial body, it was like a body rejecting an organ. So poor Caleb is going to sit on that dock and degrade until he dies. A site that he wanted to not leave his poor daughter with, and so I think he sees at the end of that story he is happy with that what he’s thought to accomplish, to see his daughter again, even though he’s not the original Caleb and to do what he could to protect her. That’s done, but Caleb will decay and degrade and we’ll see what happens. But Dolores did have some contact with him, so you never know.

And you brought back some familiar faces in the finale with Jonathan Tucker and Steven Ogg. How important is it to include those callbacks and Easter eggs for fans? Could they anticipate more?

I think it’s just a part of the conceit, which is when you have this really memorable, capable host that different people ruling the host will co-op them in different ways. So Hale definitely made use of two of the best killers in the past, even though they’ve been reconstituted. Selfishly, I love my actors so much. It is hard to say goodbye, I’m happy that many of them are hosts, but yeah, you could see some faces that people may have missed in a final season should we get it. Hale ends her own life by crushing her pearl, after crushing the host version of The Man in Black’s (Ed Harris) pearl. What is the mindset behind her demise?

I absolutely adore Hale and Tessa, and Dolores died last season and this season Hale gets to take the reigns. She’s had this really complex arc with so many permutations starting first as a human and then as almost a proxy for Dolores and then rejecting that, creating her own new identity that is uniquely her. She suffered so many losses on the human scale with her child. I think she’s also known now what it’s like to be a God. She’s seen the world that she wanted to manifest come true.

Unfortunately, her plan wasn’t fully working, there was resistance. There were people who did not desire the same things, even though she was trying to help them and there were these hosts who were choosing to do this very human thing, to die. I think at a certain point, she realized that for her kind, that wasn’t a virus, but a choice. Sometimes limitations give the moments we have greater meaning and she had tried to make the world that she wanted with some success, but not everything she wanted. And now because of the Man in Black, the entire world is hurtling towards destruction and so her reign has ended and she could let everything else end with her, but she doesn’t want that.

She wants to have the next chapter go on, even if it’s without her, and to me, that is the epitome of grace. I think when she chooses to crush her pearl, the look on Tessa’s face, and this was very important to us when we were filming it, she wanted it to be a choice made out of strength and the appreciation of the beauty of the world. She actually got to stop and stare at the vista around her and know that she wouldn’t get to stare at it forever and so it had more meaning in that moment. I think that for her, she thought about transcending in one way, but she ended up transcending in a different way.

Is that the end of the human story? Or do they still have a place in this world beyond the season?

If it’s a place it’s a very, very niche place because the man in black or the host version of him was unfortunately very successful. He took what is a flaw in both hosts and humans, which is a penchant for violence and for infighting, and set them upon each other for mutually assured destruction. He was very effective at it. So yes, life on earth, as we know it is over.