Rose Leslie already been cast in this six-episode adaptation of The Time Traveler’s Wife before she cracked open the iconic novel by Audrey Niffenegger. The actress was stunned: “I thought it was the most heart-wrenching, powerful love story I had read in a very, very long time.”

In Wife, artist Clare Abshire (Leslie) contends with her soulmate Henry DeTamble’s (Theo James, Sanditon) genetic disorder, which makes him involuntarily time-travel — sometimes to Clare’s own childhood. Here, Leslie breaks down the time-plagued couple for us. Tell us how you see Clare.

Rose Leslie: From a very early age, her world begins to revolve around Henry. As she grows up, she is constantly juggling two scenarios — who she is when Henry is around and who she is when he’s missing. The adult Clare has this innate belief that she and Henry are meant to be together. She’s actually fiery and determined and patient and a hopeless romantic in that respect.

What are some of Clare’s unique challenges?

There is a scene where there are two Henrys, and she’s slowly but surely processing the fact that she now has two Henrys in her life of different ages. And I suppose there’s a farcical element to that, in her trying to catch up and comprehend the enormity of the situation. 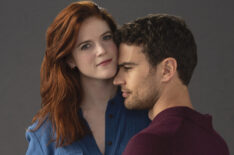 What makes these two a great couple?

They listen. They realize they’re going to evolve together in their relationship, and they are supportive people to one another. And I think that is what pulls them through. When your other half is a time traveler, you’ve got to be very, very understanding!