9 Most Romantic ‘BlackBonnet’ Moments on ‘Our Flag Means Death’

There’s a good reason Ed Teach (a.k.a. Blackbeard) and Stede Bonnet (a.k.a The Gentleman Pirate) are the internet’s new favorite fictional couple.

Actually, strike that — there are many good reasons these two have set social media ablaze in recent weeks. From the depth and earnestness of their story — a romance that happens to be queer, rather than a coming-out-focused or tragedy-laden “queer romance” — to excellent performances from Taika Waititi and Rhys Darby, “BlackBonnet” is worth celebrating. (Not to mention crying over, given how Season 1 ended. HBO Max, please renew this show!)

Here, we’ve compiled all of our favorite Stede and Ed moments from Season 1. Stede and the Telescope

Burning with jealousy over the arrival of Ed’s old friend Calico Jack (Will Arnett) and angered by the negative effect Jack had on Ed, Stede fights with Ed only to spend the whole night longingly watching him on the beach through a telescope. The scene where the crew realizes this and the ensuing Ed-Stede “breakup” via Lucius are played for laughs, but the heartbreak and yearning are palpable.

This isn’t an interaction between Ed and Stede, but it is the first time someone mentions their connection with a romantic connotation (unless you count the voiceover earlier in the episode, during which Izzy claims Blackbeard has been “seduced”). In an attempt to sever the Ed-Stede bond and get his boss back to being Blackbeard, Izzy (Con O’Neill) says that Ed “adores” Stede, and that it’s messing with his head. Stede’s surprised reaction is quite sweet: It’s clear he wasn’t expecting to be “adored” by Blackbeard, but he’s delighted about it.

Third-wheel Lucius (Nathan Foad) was a stand-in for the audience during this scene when he said, “Oh my god, this is happening.” Between gently plucking crumbs from Ed’s beard and sharing flirty banter about a hypothetical restaurant Ed could open — Stede would, of course, be the customer interested in the eclectic mix of both dinner and fishing gear in the gift shop — it was glaringly obvious to everyone (except for them) how these men felt about each other. Thankfully, Lucius was on hand to talk some sense into Ed… and tell him that Stede was into him, too.

“You Don’t Belong in Doggy Heaven.”

Blackbeard bares his soul in this tearjerker scene, which sees him confess to Stede a shocking secret: He’d never killed a man since offing his abusive father. Sobbing, he tells the Gentleman Pirate that he was supposed to kill him, but haunted as he is by the ghosts of his past and caring for Stede as he does, he just couldn’t go through with it. “You don’t belong in doggy heaven,” he says, referencing an earlier conversation with Izzy in which his first mate declares that Blackbeard can’t have “pets.” The way he leans against Stede as Stede comforts him is utterly perfect.

How Was Your Day?

After going back to his wife, Mary (Claudia O’Doherty), and their children — to their great detriment, he finds — Stede still can’t get Ed out of his head. As he sits all alone in his fancy dining room, he whispers to the empty chair across from him, “How was your day, Ed?” It’s proof that no matter how badly he tried to convince himself he could make things work, he’d always feel out of step in the stereotypical Revolutionary-era world… and at his core, even though Badminton (Rory Kinnear) made him believe he “destroyed” the greatest pirate ever to sail the seas, the person Stede wants to share his life with will always be Ed.

Stede has no clue how much his words mean to Ed, who grew up wishing for the high-class life his poverty-stricken family couldn’t have. As they return from the snobby British party, Stede notices a strip of red silk fabric Ed’s been holding onto since he was a child. He places it in Ed’s vest as a pocket square: “You wear fine things well,” he tells him. It’s an (unintentionally) ultra-flirty line that inspires quintessential rom-com “longing glances from afar,” as Ed leans in (perhaps for a kiss?) but quickly leans away, and the two men part only to turn around and share a yearning gaze.

Stede’s dejection with the spyglass makes this moment all the sweeter. After their “breakup,” Ed leaves with Jack only to see Stede’s ship come under fire from the British (thanks for nothing Izzy, you traitor). Ed ditches his “pal” and swims back to Stede. Later, it’s his quick thinking by declaring “Act of Grace!” that saves the Gentleman Pirate from the firing squad. These are intense scenes, but ones brimming with romance, too; as they’re tackled by soldiers, an elated Stede marvels that Ed “came back,” while Ed says he “never left” (awwwww!); as they lie on the deck with their hands pinned behind their backs, Ed moves his foot to touch Stede’s in a kind of hand-hold; everything’s falling apart around them, but they only have eyes for each other. Ed’s willing to give up everything to save the Gentleman Pirate, and if that’s not a swoon-worthy declaration of love, we don’t know what is.

In a scene that can only be described as “triumphant,” Stede realizes that, like his wife, he’s found love… he just hadn’t known that’s what it was. They have an honest chat about what it’s like to be in love with someone, and Mary lists off a few things; broadening each other’s horizons, passing the time together well, laughing together. As she talks, it dawns on Stede that he has that, too. “What’s her name?” his wife asks. “Ed,” Stede responds. “His name is Ed.” It’s a heartwarming spin on classic rom-com tropes, a middle finger to queerbaiting and a tearjerker moment, all in one. And it reminds us that we really need this show to have a Season 2.

“…is you.” Finally. In true rom-com fashion, Our Flag Means Death makes viewers wait and wait and wait for that first kiss. On a cliff overlooking the sea at sunset — so, like, the most romantic setting possible — Ed admits that he’d had more fun during his time co-captaining with Stede than he’s had in months, years or maybe ever. At last, he declares the thing that makes him happy is Stede, and the two share a kiss. “You make Stede happy,” Stede says, smiling, when Ed leans away. The whole thing, from the planning to run away to China together and holding hands to Ed keeping an arm wrapped around Stede the whole time, is sweeter than oranges. 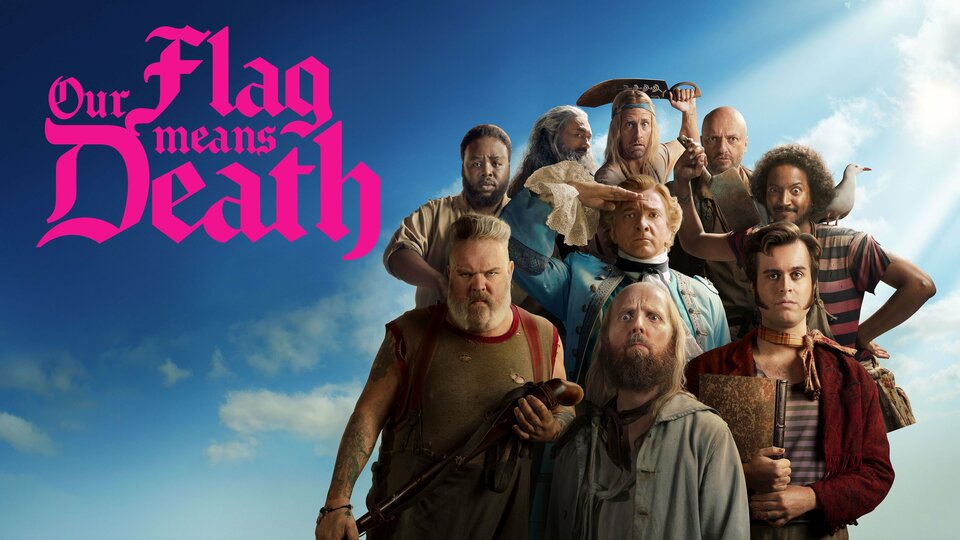