Both were thrilled with the opportunity. “I got the script two months before shooting it. I became obsessed with every page,” Esco, who previously directed the 2014 feature Free the Nipple, tells TV Insider. As part of her prep, she creates a playlist (“it’s very tribal, very primal, that vibration in your chest”) of composers she admires.

“I obsess about what really is going on inside all our main characters, what is not really said on the page, what is not really said on camera and how can I bring that out, the vulnerability, and the same thing with the violence,” she continues. “I wanted to bring a different energy to it, to bring in emotionality to the violence and the action in our show.” Part of that was bringing in cellos.

Carr shares she’d been asking since the first season to direct, but didn’t get the chance until now. “Because this is our last season, I think that our showrunners, Kathryn [Price] and Nichole [Millard], are being incredibly generous with opportunities and I made a pitch and they listened to me and they gave me an opportunity.” She shadowed a few directors, including producing director Eric Stoltz and Michael Smith, who told her “the most important job is to make every actor’s performance great.”

Carr also lucked out that in addition to “an incredible script” and great actors, she knew a few of the guest stars, including Delphi Harrington, who plays one of the jurors. “She and I hadn’t spoken in 10 years when I was quitting acting and she was begging me not to,” she reveals. 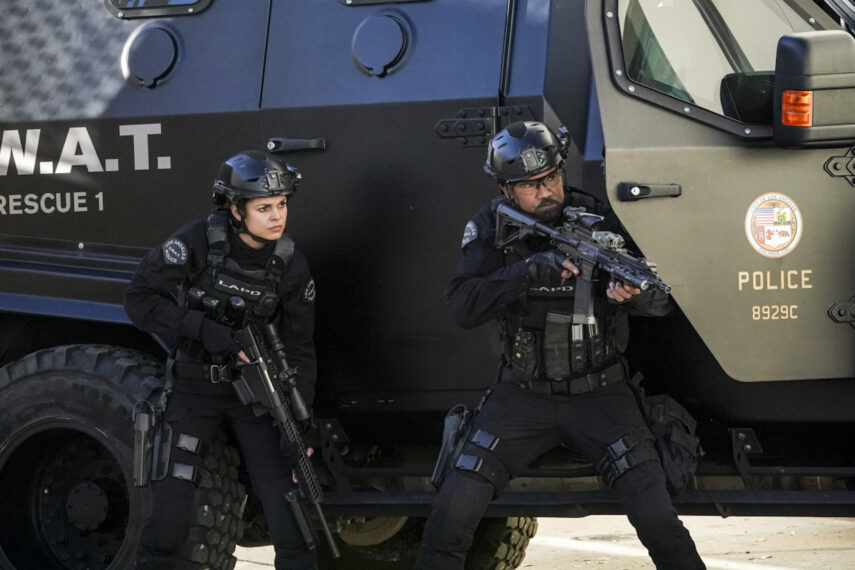 Both episodes have emotional through-lines. On S.W.A.T., David “Deacon” Kay (Jay Harrington) grapples with choosing work versus his family first, and the team races to find a grieving father-turned-gunman targeting hospital employees after his son was denied a kidney transplant. “There was no helicopter scripted and I wanted a helicopter to have that sound playing through the third and fourth act,” Esco says. “We ended up slowing down the pace of that helicopter sound 25%, so it just kind of mimicked more of the sound of the heartbeat and the pulse, because I felt like that was gonna drive up the intensity and drive up the stakes of what was going on and bring in a lot of emotionality to all those scenes,” especially for Deacon.

Helicopters also came into play for the more challenging scenes for Esco to direct. For a shootout, “I wanted the audience to feel like they were there,” she explains. “The camera was very much moving with the characters like it was one of them.” Not only did she only have the helicopter for a limited time, but she also had to consider her own acting in the scene, with Hondo (Shemar Moore) sending Chris out to her sniper position so Esco could take a look at the monitors. “It was so exhilarating as the helicopter is on top of us, making sure that I’m getting ground to sky shots, incorporating Shemar and the helicopter, our heroes with the helicopter, our antihero with the helicopter. … I was so overjoyed and overwhelmed with just this feeling of fulfillment that I got emotional.” Over on Bull, the case greatly affects one of their own as well, with TAC’s client the surgeon who saved Jason’s (Michael Weatherly) life after his heart attack. “Bull has a really hard time overcoming some personal issues to represent this client, so there’s as much comedy as pathos when he has that to do,” Carr previews.

It’s with the client that the most challenging scene for her to direct came. “It was the surgery. There were so many moving parts and I had to choreograph it like it was a dance,” she says. “At one point I had said to the wonderful actress who plays the doctor, Haviland Morris, ‘just pretend that your hands are little dancers on the end of your arms and try to move gracefully,’ ’cause crazily enough with all the surgery in the background, I needed her hands to have a delicacy that a layman just doesn’t have.”

Meanwhile, it seems that Carr’s character just can’t catch a break when it comes to love, and Marissa turns to Taylor (MacKenzie Meehan) in this episode. She enjoyed directing a walk-and-talk for the two as “Marissa bares her soul to her friend, and her friend wants to help her. It’s such a beautiful moment of friendship that goes awry in ways that you just can’t anticipate. … The information that Taylor reveals in the episode is really jarring and it’s gonna throw her for a loop.”

Special Agents Anthony DiNozzo and Kate Todd are together again ... sort of.

The actors-turned-directors received plenty of support from their casts and crews. “The crew has been so generous. Our producers just have opened the playing field and whoever wants to play, if you’re willing to put in the work, they’re giving us the opportunity,” Carr says. “The series regulars could not have been more supportive and happy for me and just went out of their way to do a great job.”

Esco’s TV directorial debut came soon after her costar Alex Russell directed his first episode of S.W.A.T. in December (after being behind the camera for a couple shorts). “We were talking about what he had to go through and what I should be expecting sometimes about certain things, and so we were there to support each other,” she says.