[Warning: The below contains MAJOR spoilers for Season 6, Episode 2 of Outlander, “Allegiance.”]

While Claire’s (Caitriona Balfe) new habit holds nightmares briefly at bay, concerns over the impending revolution lead to serious heart-to-hearts with Jamie. Plus, Marsali (Lauren Lyle) goes into labor and things don’t go quite as expected. Below, we’re breaking down all of the key drama, so beware of spoilers. The episode opens with Jamie fulfilling his new job as Indian Agent as he and Young Ian (John Bell) listen to the Cherokee’s requests, they ask for guns and Jamie isn’t sure he can meet their demand, but claims he’ll try, although the trade of goods and supplying of knives is more likely. The Cherokee try reassuring Jamie of their allegiance, claiming if they wanted to fight they would have, but the exchange leaves the Fraser patriarch torn.

Back on the Ridge, Claire checks on Tom’s wound as Malva (Jessica Reynolds) looks on. He tells Claire he won’t have his other hand repaired despite its degradation as he sees the ailment as a sign of God’s will. When Claire tries protesting, Tom asks if she’s familiar with a specific verse from the bible that Malva shares, noting that it says women learn in silence. Claire doesn’t let the remark get her down as she lets Tom know what she really thinks.

As she leaves the tent where Tom is seated, she greets Allan (Alexander Vlahos) and Malva who marvel over her job as a physician. When Malva expresses interest in medicine though, Allan shuts down any shadowing that Claire offers the girl. Later that evening with the Cherokee, Jamie is awoken in his bed by two of the Native American women who try seducing him due to his powerful role as Indian Agent. Jamie begs Ian to help him by speaking to them in Cherokee. Eventually, they manage to convince the women to leave making for a comical sigh of relief.

The next day back at the Ridge, Malva sneaks over to Marsali’s where Claire is giving her an exam, as Claire teaches Malva how to take a pulse, the children get a bit too rowdy. So, Malva steps out giving Claire a chance to chat with Marsali privately. She asks about Fergus (César Domboy) and whether or not he’s been hitting her. Marsali claims that she’s the one who started a fight with him recently, as she has her mother’s temper. Marsali reveals that Fergus feels ashamed for not having been able to protect her from the Browns, and the mention brings up bad memories for Claire.

Upon returning to the main house, Claire hears Lionel Brown’s (Ned Dennehy) voice and sees a phantom of the evil man. She rushes to the ether she’s now using to cope with this trauma, drifting away into a dreamless sleep. In a less upsetting development at Brianna (Sophie Skelton) and Roger’s (Richard Rankin), she’s working on creating matches for the Ridge and he reveals that Tom’s asked him to lead a funeral service since his minister is delayed in arriving. Later that day, Jamie returns home to find Claire and after his close call with the Cherokee the evening before, he wastes no time getting close to his wife. After a little afternoon delight, Jamie asks Claire if she knows what side the Cherokee will take in the impending revolution. She admits she doesn’t know, making his decision regarding weapons even more difficult. Claire reassures Jamie that he’ll do the right thing, whatever it may be.

When Major MacDonald (Robin Laing) arrives to chat about Jamie’s first visit with the Cherokee, Jamie tells the man that the Cherokee are undecided about what they want other than the fact that they don’t want strangers crossing their borders. After the man leaves, Ian asks his uncle why he didn’t put the weapons request in, noting that it would be a bad thing to make enemies of their Native neighbors.

Following this meeting, we see the Frasers gather at the church building that’s under construction on the ridge where Roger oversees a funeral service for a woman referred to as Granny Wilson. With one of their grandchildren in tow, Claire’s attention is pulled away from the ceremony when the little boy points out the dead woman is awake. 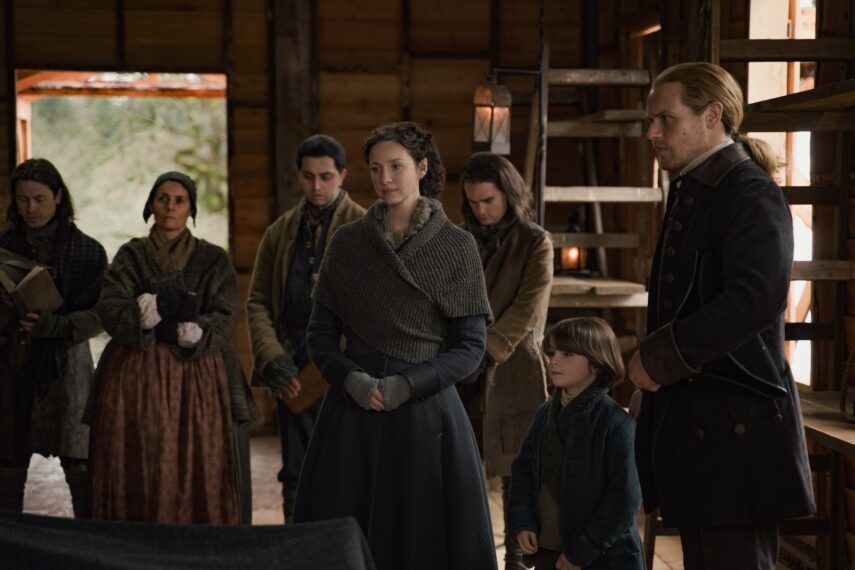 After a quick assessment, Claire determines that the lady is suffering from an aortic aneurysm that will burst in mere minutes. With nothing else to do, the dying woman’s daughter and son-in-law gather around, she complains that the funeral is lackluster and the family begins to bicker, but Roger intercedes and suggests that the woman compose herself as death looms. When a sin eater arrives to consume bread that represents Granny Wilson’s sins, he’s surprised to find her alive but follows through with the ritual just moments before she really passes on.

That evening at family dinner in the main house, Roger and Bree reveal they have news and everyone thinks it’s a pregnancy announcement. Bree is disappointed by the reaction as she wanted to show off her matches she made, but no one seems particularly wowed besides her parents. Roger also shares the news that Tom’s asked him to serve as an interim preacher, information that pleases Jamie as he dreads the alternative of Tom taking the position. Claire also shares news of her own, telling the table that she’s been told to not return to church because the settlers think her to be a witch.

The conversation is interrupted when Marsali begins experiencing labor pains, and although Claire is ready to do what she can, she does turn to Jamie and admits that she might be unprepared to take on any challenges that might arise as Marsali experiences some unexpected roadblocks. Without the baby moving and Marsali in a lot of pain, Claire dabbles with the idea of doing a cesarean on her but runs the risk of sentencing Marsali to death in the process. Needing to think, Claire sends Jamie to fetch Fergus and we see Roger enter the still where the boozy dad-to-be is drinking away. Roger tells Fergus his wife is in labor and when Fergus brushes it off, saying that Claire will take care of it, Roger takes a more serious tone. He tells Fergus that Marsali’s asking for him and that he should be the man she needs right now, even if he has to pretend.

When he finally does arrive, Fergus soothes Marsali and employs some interesting methods to try and help his wife get closer to delivering their child. When things end up getting a little frisky, Claire runs from the room and many of the Frasers scatter when noises begin emerging from Claire’s surgery.

Claire and Malva remain seated at the kitchen table though and the young girl asks if some women actually like sex. Claire tells her when you love someone you can enjoy it, noting that it isn’t for sinners and whores as Malva suggests. Outside, Ian says a prayer for the baby as Brianna walks up on him. He sees this as an opportunity to ask about the future and he inquires about the Native Americans. She tells him that despite their power 18th century, eventually they’ll be overrun by settlers who force them onto small patches of land. They’ll suffer greatly she admits, and it shatters him to hear it.

Once Marsali does give birth there’s a sense of relief among everyone until Fergus takes a closer look at the child and then rushes off to be alone. The baby it turns out is a dwarf, but Claire reassures Marsali that the little boy is perfectly healthy. Despite Fergus’ response to the child, it’s obvious that Marsali’s love is strong for her baby.

As the night winds down, Roger and Bree return to their cabin where they tuck little Jemmy into bed and talk about her lackluster response to her matches. She complains that everyone only seems to value a pregnancy surprise, and Roger asks if she’s more upset because they’ve been trying to get pregnant without success. Before they can delve too deeply into the topic, there’s a knock at the door from Aidan (Caleb Reynolds), the little boy who arrived at Fraser’s Ridge with the Christies and fisherfolk. He tells them he got lost, but before Roger heads out to bring the boy to his home, Roger grabs one of Brianna’s matches and expertly ignites it in a way that amazes the child, garnering the kind of reaction Bree had been looking for from everyone else earlier.

The next morning as Jamie sends Mr. Bug (Hugh Ross) and Keziah (Paul Gorman) off to Cross Creek, he also asks the old man to look in on his Aunt Jocasta (Maria Doyle Kennedy). Lizzie (Caitlin O’Ryan) is more than a little friendly towards Kezzie as well, hinting at something potentially brewing between them. As the carriage exits the ridge, Jamie turns to see the Cherokee standing on his border.

They ask him if he’s put in their weapons request and Jamie reveals he’s decided against doing so, this doesn’t please the Cherokee as they tell him they’ll remember this. Ian steps up to his uncle and says he has a kinship with the Natives and would like to give them a fighting chance to survive considering what Brianna told him about their future. With much to consider, Jamie takes a seat on the porch where he and Brianna talk about things, like his fear of Tom using the church as a weapon of war. The conversation leads Jamie to seek out Tom and remind him of the Free Mason pledge he made and asks that the construction for the proposed church serve as a meeting house instead where everyone is welcome, including Claire.

Seeming to agree with Jamie, Tom walks away and returns to his tent where he finds spoiled milk on the table. He lashes out at Malva and complains she’s spending too much time with Claire and by proxy is forgetting her chores. When he goes to punish her with his belt though, Tom’s bad hand makes it impossible and in return, Malva smiles in his face.

At Marsali’s Ian gives the baby boy, named Henri Christian, a Mohawk blessing. Ian then goes on to share that he had a child while with the Mohawk and that Fergus will come back to her, even if it doesn’t seem that way now. Jamie ends up overhearing this conversation from outside, forcing him to reevaluate his stance on providing weapons to the Mohawk.

'Outlander': The Christies Make a Splash at Fraser's Ridge in 'Echoes' (RECAP)

Plus, Claire walks a precarious line with her trauma.

Meanwhile, at the main house, Tom approaches Claire and reveals that he’s had a change of heart and will seek the surgery she offered on his hand. He claims that God put her in his life to help him with this problem but she refuses to do the surgery until his other hand-wound is healed. Later that night, Jamie pens a letter to the Governor requesting weapons for the Cherokee.

When Claire asks why Jamie has had a change of heart, he shares with Claire Ian’s secret about having a child with his Mohawk wife. He further explains that while his allegiance may not be to the Cherokee, he does have allegiance to Ian who has allegiance to the Mohawk. This understanding decides Jamie who will move ahead “come what may.”

Will these allegiances be tested? As war encroaches and tensions between the Frasers and Christies continue to rise, anything seems possible. Stay tuned for what’s to come as Outlander continues on Starz.