ABC is heating things up with the sounds of the season courtesy of A Very Boy Band Holiday. The special sees members from *NSYNC, Boyz II Men, New Kids on the Block, 98 Degrees, New Edition, and O-Town assembling to bring their vocal stylings to recognizable tunes sure to make your spirits bright.

“We have done a few projects over the years with different members from different groups, but never at this level,” says executive producer Joe Mulvihill. “To see them all have mutual respect for each other and really understand what each other has been through is a unique combo that is fun to see on camera “

Chris Kirkpatrick can attest to the fun factor. We caught up with the *NSYNC member as he previews this nostalgic and festive evening of song. How were you approached about this special?

Chris Kirkpatrick: I know this was Erik-Michael Estrada from O-Town’s idea. We have a lot of mutual friends in common, but it went through respective management.

It feels like a gathering of this boy band fraternity. Did it feel more like a family reunion on set?

I think, for the most part, it was a reunion. With the Boyz II Men guys, New Edition, and even the New Kids, these were these bands we never worked with that much. 98 Degrees, O-Town, all those bands we’ve done so much with that we’ve all become good friends over the years. I’ve also done a lot with Boyz II Men [more] in the past years than in previous ones.

How would describe the atmosphere?

It was so much fun. We were all in each other’s trailers telling stories, talking about all the times our paths have crossed and what we’ve done. Having Boyz II Men, New Kids, and New Edition was cool to have there because we had the opportunity to say how they’ve influenced us with what we did. We talked about how when we started we used to [sing] a lot of their songs … We could have gone on for hours. It was cool to hear everyone’s perspective on the business. What were some of the songs you were excited to perform?

We were lucky to be able to do one of [*NSYNC’s] songs “Merry Christmas, Happy Holidays,” which was a lot of fun. It was cool having all the guys taking a verse on our song.

*NSYNC’s holiday album Home for Christmas was such a big success. And the song “Merry Christmas, Happy Holiday” remains iconic.

When we [first] decided to do a Christmas album, we had all these industry standards on it. We had our take on those songs … the arrangements were unbelievable. Then when it came time to do “Merry Christmas, Happy Holidays,” JC [Chasez] and Justin [Timberlake] had a hand in writing it. At first, it was like “what a great song” and it was our own song. [We thought] people were going to go back to the standards, but then it came out and people took to it, and really it became its own industry-standard of Christmas songs right now. It is very flattering.

The boy bands of the ’80s and ’90s have such staying power. What are your thoughts on the new generation of boy bands?

One Direction is probably one of my favorites. I freakin’ love them. BTS is amazing in what they are doing. You can see with bands like that the choreography is tighter, the music is more elaborate. They have to take it to the next level, and all these bands have been doing it. It is fun to watch. We got classified as a boy band, but we always considered ourselves a vocal group. Looking up to Boyz II Men and all the vocal groups we looked up to, I think that is what keeps that staying power in music with the harmonies and the arrangements we did with each song.

We’re about 20 years since *NSYNC’s last album, yet you’ve still maintained that bond.

We’ve done a great job keeping in touch with each other regardless of what we’re all doing. We support each other in everyone’s endeavors. We grew up together. We were brothers.. that kind of family, you don’t just disband. We make a point any of us are in the same town, we get a hold of each other. Even when we were out there filming, I got to see Lance [Bass’] new babies. I had dinner with JC. Justin was here in Nashville. Then I did the show with Joey [Fatone]. We try to make time for each other, especially for birthdays and special occasions. Any time the other guys say, “Hey, let’s take a trip and hang out,” [we do it.].

The other groups featured here have done reunion tours or have been regularly touring. Where do you stand on any *NSYNC reunion plans?

I will never say never, but we’re all still doing our own things and carving out our own niches in life. The band thing hasn’t really been a thing we can all come to terms with and say, “I’m ready to do this.” We haven’t come to an agreement on doing anything together. We’ve tried, but there are too many variables involved. It doesn’t seem like it’s in the cards right now. At this point anyway. Maybe when you’re all 60.

What else do you have going on?

Personally, I’ve got a son who just turned 4, and takes up a lot of my time. Luckily, now I’m at a point in my career where I can leave for weekends and go do gigs whether it is ATCK (All The Cool Kids) with AJ [McLean] of the Backstreet Boys or doing [Vegas show] “After Party” with Joey or hosting, I’m lucky I can fly out and do my job and spend the week home and take my kids to school. It’s perfect.

Will this special be an annual tradition?

That’s what we are hoping for. We are hoping it’s well-received, it was a lot of fun to do. It has cheesy moments [but] it also has got the cool moments you go, “Wow, these songs are great. These vocalists are great.” I think it’s a great holiday idea because you’re getting collaborations with bands you used to look at as rivals. Now they’re coming together for Christmas. Just for us to be back out there performing and performing with these other bands, it’s what Christmas needs. It was a lot of fun. 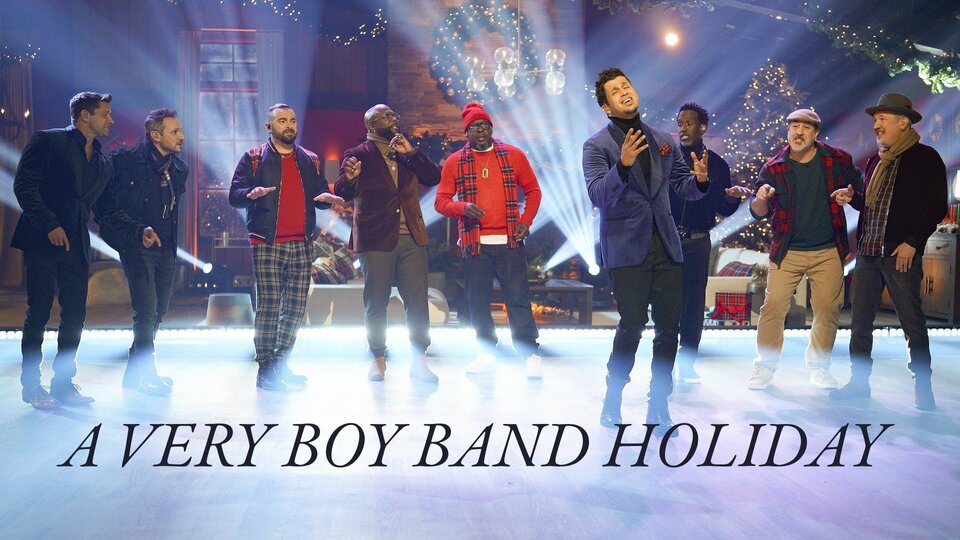 A Very Boy Band Holiday where to stream