Season 19 has featured the most change ever on NCIS: boss Leroy Jethro Gibbs (Mark Harmon) is gone, off finding some sort of peace in Alaska; Ellie Bishop (Emily Wickersham) is on an undercover assignment, somewhere; Jessica Knight (Katrina Law) is on the team full-time; and Alden Parker (Gary Cole) is the new leader. And we’re only seven episodes into the season!

When Gibbs was suspended last season (indefinitely, at the time), NCIS had Timothy McGee (Sean Murray), Nick Torres (Wilmer Valderrama), and Bishop mostly working by themselves on cases. Knight joined after she was involved in a case, and she was McGee and Torres’ pick to join them full-time at the beginning of the season. Because of that, bringing her into the fold was seamless.

They met Parker while investigating the ongoing serial killer case that Gibbs and reporter Marcie (Pam Dawber) were looking into last season, and when Alden let Gibbs go instead of arresting him, he was fired from the FBI. Though not explicitly stated, Parker then became Gibbs’ choice to replace him after McGee made it clear he didn’t want the position full-time.

The transition hasn’t been conflict-free. Torres, in particular, hasn’t warmed up to Parker just yet. And for the most part, Parker has just sort of been hanging out in the background in the two episodes he’s officially been the boss. He’s spending time with the agents outside of work — at the track in “False Start,” then going out for burgers with Torres and Knight in “Docked” — and he has no problem with Torres (accidentally) publicly shooting down his idea to use an app to keep each other updated on cases. In other words, Parker’s been trying to keep it as easy as possible.

And so the real test will come when Parker has to put his foot down and has to act as boss, not as the guy who brings in pastries. When he has to truly dole out a punishment and not just pretend he wants Torres to stay late and finish paperwork, how will the other agent react? When he has to stop one of them from going rogue, what will happen? For now, those are simply hypotheticals. 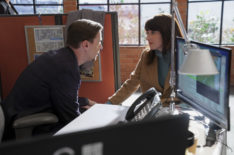 So what do you think of the new team and the changes this season so far? Vote in our poll below.