Jennifer Carpenter of ‘Dexter: New Blood’: Returning to Deb ‘Was Like Jazzercise’

Dexter Morgan’s head must be an interesting place to be. Besides recently coming out of a nearly 10-year break from committing murder, the well-intentioned serial killer, played by Michael C. Hall, has been under an increasing amount of pressure in the revival series Dexter: New Blood.

Besides killing again, he’s also come face-to-face with the now-teenage son, Harrison (Jack Alcott), he left behind when he faked his death almost a decade earlier. Plus, he’s maintaining the pretend identity of Iron Lake, New York, community member Jim Lindsay to keep his murderous past in the past. However, that past is very present since in his mind he sees and hears the voice of his deceased sister, Deb (Jennifer Carpenter). Deb’s presence in Dexter’s life is much more intense and more aggressive than when Dexter would see and hear his adopted father Harry (James Remar) in the original series. Instead, Deb is the brutally honest friend who makes your life hell while also maybe making you see things more clearly.

To find out how she stepped back into Deb’s shoes, albeit a slightly different version of the character she played for eight years, TV Insider talked to Carpenter about her approach and whether she thinks Deb is a good thing for Dexter as he faces myriad complications. 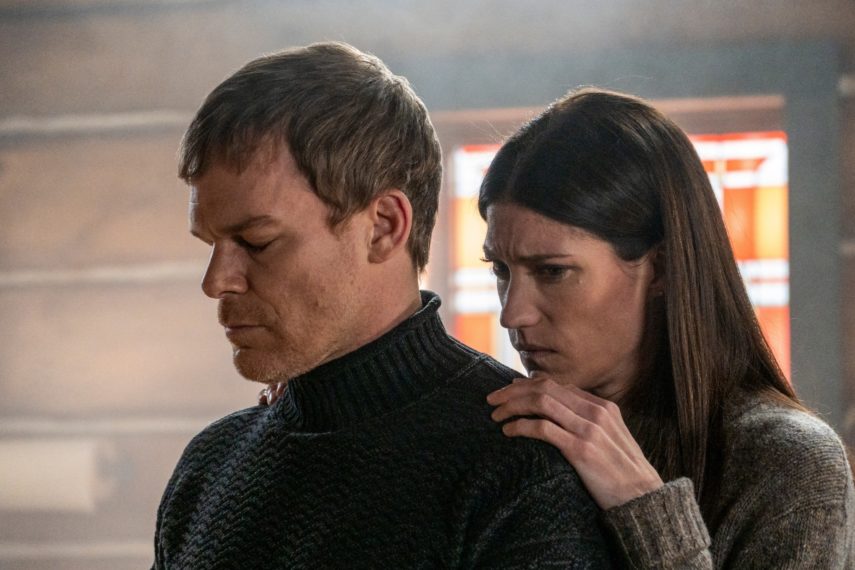 What were some of your first questions about being in the revival and being this different version of Deb?

It was a conversation Michael and I touched on maybe once a year for the past two or three years. It was always in my mind that he was chewing on the idea, and it was no secret to me that I was dead. I think I just asked myself what I would be interested in if I were seeing it from a fan’s perspective. I decided I wanted to see karma at play, essentially. No matter where it went with anyone else’s perspective, that was my home base for everything. It was sort of like trying to perform it all while underwater because it was all so surreal.

This Deb isn’t warm and fuzzy. She’s aggressive and really lays into Dexter. How did you find that voice?

I had to not take the temperature of everything else. I think it was incredibly necessary that I isolate my work, my part, my story from whatever the rest of this experience is for everyone else. I almost didn’t even pay attention to what was going on in the main storyline. I just put my focus on Dexter. Where is he? What is he afraid of? What would he think Deb would think of this? What does he want me to tell him? In the original series, Deb didn’t even know her brother’s true nature for the longest time. How is it for you now that the only place you are is in his inner head?

The work all felt easier and more delightful. Part of my hesitation to come back to the show was it was torturous. It was the light side versus the dark side. It was always like they were trying to dim Deb’s light, and I suffered right alongside of her. This felt very different. This was more like Jazzercise.

Do we know how long has Deb been appearing to Dexter? Was it the minute she died in the show, and all of a sudden she became his conscience?

There was a part of me that thought, well, I need to get there a week or two early [before shooting] and ask Michael to do my work for me because none of the impulses come from me, they come from him. Then I realized that that was completely wrong because I know more than him about him. You know? But how long was Deb there? I didn’t care.

Do you think the Deb we see is actually helpful for him? She raises a lot of the questions he doesn’t want to confront but yet also rides him hard.

I think she is. I think the trick in that question is thinking that there could ever be help. I feel it was like the definition of insanity, doing the same thing and expecting a different result? Maybe Dexter’s going to be a good guy this week but, yeah, he killed that guy, but don’t you just feel so sorry for him because he didn’t really want to? I think Deb made that mistake over and over and over in the series. Now she’s just dealing with what is and not what could have been.

I started dissecting everything and making charts where I thought he was emotionally. I mean, I love to do that sort of investigative work with scripts and parts. That’s part of the fun, and then I just threw it all away. I was like, this is not what this is. I don’t need to know what he knows. I need to know what he’s feeling.

Was it freeing for you to let a lot of that go?